Survival of Sanskrit shows Resilience of our Civilisation: Dushyanth Sridhar 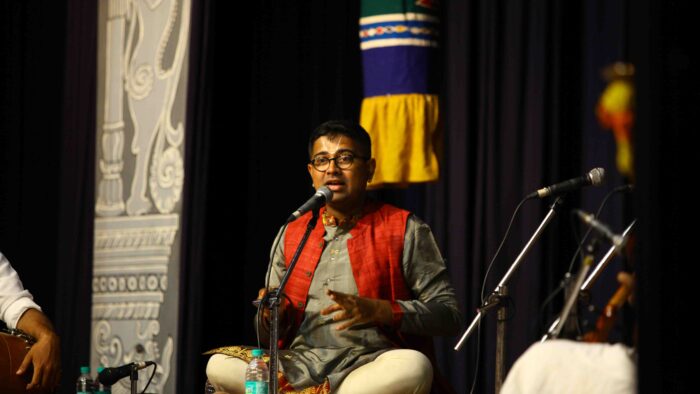 Upanyaskar Dushyanth Sridhar has been engaging with people on topics related to India’s Vedic heritage for several years now. Erudite and with mass appeal, he has taken his mission of spreading Vedic education further by launching his e-portal Abhinava Patashala to get people to experience Bharatiya sara bodhani (the quintessential knowledge of Bharata).

Dushyanth Sridhar has learnt Sanskrit in school. Like for many his introduction to Sanskrit has been through shlokas, most of them in Sanskrit. He has learnt the Upanishads and some suktams primarily in Vedic Sanskrit. He had an opportunity to learn higher Vedanta like Sribhashyam, Geeta bhashyam, Satadusani in Sanskrit. He knows Manipravalam, a macaronic language found in some manuscripts of South India. It is a hybrid language, typically written in the Grantha script, which combines Sanskrit lexicon and Tamil morpho-syntax.

On the occasion of World Sanskrit Day, CSP spoke to Dushyant Sridhar on the importance of marking a day for this beautiful language.

Does Indic wisdom enable us to think differently and see the world differently?

We have the idea of “Aano bhadra krtavo yantu vishwatah'' (1.89.1 rigveda)” which talks about absorbing noble thoughts from every direction. Badra in Sanskrit means auspicious, noble or wisdom based. To us it doesn’t matter if some good thoughts are not from India but from some other civilization. As long as it is good for humankind it is worth absorbing. This is what differentiates Indic culture from all other cultures. Indic wisdom says 'accept noble thoughts from every other culture'.

This approach will make us think differently. If I am a true practicing Hindu, it definitely gives a greater acceptance of others.

To explain how we see the world differently, lets take the shastravakyam which says Aham Brahmasmi from the Upanishads. Adi Shankaracharya interprets this as ‘there is no separate identity between the Paramatma and the Jeevatma’ which is the non-dualism of Advaita. In contrast, Madhvacharya interprets Aham Brahmasmi and says there is a disparity between Jeevatma and Paramatma, this is the dualism of Dvaita. To bridge the gap between Dvaita’s dualism and Advaita’s non-dualism, Sri Ramanujam gives the philosophy of Vishishtadvaita which is qualified non-dualism, where he says though the Paramatma and Jeevatma are different, the jeevatma is the body of the paramatma and there is a symbiotic relationship between the two. One sentence is being interpreted by three different luminaries in different ways. This is what Indic wisdom is about, we have the freedom to explore and differ.

Is it important to mark a day for Sanskrit. What can be done to make it meaningful.

It would be disrespectful for me to say that it is not important. But in my humble opinion it is a very Western concept to mark a day for somebody or something. But as to what can we do to make it meaningful, we can take a vow that our hearts and minds every day is going to be Sanskrit Day.

What inspired you to start your patashala?

The word patashala is not a new word for us. This was the way ancient Vedic or Indic knowledge was dispensed for millennia. We are also aware that as beneficiaries of the modern education system the patshala has disappeared. When I say patashala, it is not just a place for a teacher to dispense his or her knowledge to his or her students. It is about the relationship that the guru has with his shishyas. I know that I have a teacher in school and she teaches me. I don’t have a relationship beyond that. A patashala is beyond that. I start viewing the guru and the guru mata, as my own parents. I want students to experience this relationship between a guru and a shishya so I thought the best way would be to reinvent the patashala. I want to reach Indians in India but also those who have affiliation to our Indic culture.

How is Sanskrit the key to Indic knowledge?

I wouldn’t say that Sanskrit alone is the key to Indic knowledge. Alongside Sanskrit, Prakrit and Pali are two other languages which speak of Indic knowledge. They speak of Buddhism and Jainism, and are important languages. Besides that, Tamil plays a very important role as a representative of the ancient literature that we have through manuscripts, scriptures or inscriptions.

Sanskrit coves a major chunk of the commentaries on the Veda or on Vedanta, Brahmasutras, Bhagavad Gita or its commentaries as well as the Ramayana and Mahabharata, the Puranas and Dharmashastras. Some basic knowledge of Sanskrit will help us appreciate and enjoy Indian knowledge in a larger perspective.

How do you connect the values implicit in Indian systems to their structure and content.

We have seen the administration, implementation of various programmes in different regimes and countries. Most of the systems first announce the scheme and then it is implemented. This is not what Indic wisdom does. It says if a scheme is good, take it to all levels. Let the beneficiaries realise the importance of it. And finally make an announcement that this was the scheme that was conceived and implemented. First the karma is done and then knowledge or gnyanam that was derived is explained. Karma yoga comes first and then gnyana yoga. When the Brahmasutras were given, Vedanta Brahmasutra which deals with knowledge came after Karma Brahmasutra or Karma Mimamsa. So Karma Mimamsa is step one, Gnyana Mimamsa or Braha Mimamsa is step two, action first, knowledge next.

What can India offer to the world which shows continuity between her past and present?

Besides Sanskrit, there are many other languages, hailed by scholars as classical or heritage languages. But Sanskrit as a language has helped a civilisation prosper. Be it our Vedic sciences or books written on astronomy, astrology, mathematics etc they have all relied largely on this language. So though it may not be the official language of any particular state, it is highly used by many regional languages by interspersing many words from Sanskrit. It is still a living language in various other forms. Sanskrit is a language has managed to survive for millennia after facing so many hurdles. The survival of the language in itself can give us conviction that despite several hurdles, Indian civilisation is resilient.

Why do you think it is important for Indians and non Indians interested in Vedic culture to read the shastras?

Both Indians (who are living in this nation) and non-Indians, including people who believe in Indic civilization and who have lived in various other geographies (Afghanistan, Pakistan, Nepal, Bhutan, Sri Lanka, Bangladesh, Bramhadesh (Myanmar), Laos, Cambodia, Vietnam, Malaysia, Singapore, Thailand and Indonesia) are influenced by this land. We have had an impact on all these countries at various points in time. Even though they may have different belief systems today, I would regard them also as beneficiaries of this civilisation. Secondly, Indians who were born and raised here but settled in other parts of the world and whose children and grandchildren are citizens of those countries are also interested in Vedic culture.

The content in our Vedic civilisation is complete. It does not restrict itself to philosophy or theology. It talks about sciences as well as art and literature. As a civilisation we have never coaxed anyone to learn our values, but if a person has an interest he has an opportunity to learn.

What is the role of our great acharyas in keeping Sanskrit alive?

Needless to mention we have Valmiki and Vyasa who have blessed us with two big beautiful poems - Ramayana and Mahabharata. Vyasa has compiled the other puranas. We have Kalidasa, Bharathi, Bhasa, Dhandi, Bhartṛhari, Neelakanta Dikshita, Appayya Dikshitar,Vedanta Desikar,  Venkatadwari Kavi, many other people who have enriched Sanskrit through literature including poetry, prose and drama.

When we come to our acharyas, be it Adi Shankara, Ramanuja, Vedanta Desikar, Madhvacharya, Vyasathirtha, Jayathirtha, though their inclination was towards philosophy and theology, they have used Sanskrit to explain the tenets of their philosophy which they have preserved through their work. Be it the classical poets and playwrights or the traditional acharyas they have kept the language alive. We have many unsung scholars who are still keeping the language alive and on this day we need to bring them to light too.