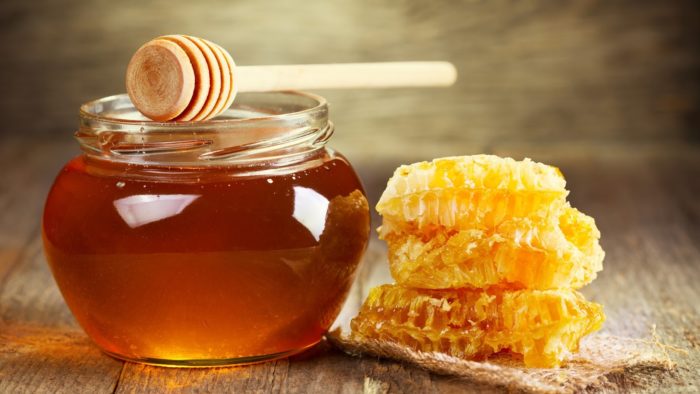 A recent study on the uses of honey for wound management, “Honey as wound treatment? Scientists are exploring its potential effects” spoke of the scientific benefits of honey and managed to find non-messy ways to apply honey to wound (https://www.discovermagazine.com/health/honey-as-a-wound-treatment-scientists-are-exploring-its-potential-healing). However, there was no mention of how Ayurveda has used honey since time immemorial. Five thousand years ago, honey was considered as one of nature’s most remarkable gift to mankind and is still considered the same.

In the treatment of chronic wounds or more commonly known in Ayurveda as Dushta Vrana. Madhu is a natural antimicrobial and anti-inflammatory. Honey is hygroscopic in nature which means it tends to absorb moisture from the air and has a very acidic pH which is what keeps the bacteria away (as bacteria require a more alkaline medium to grow in – which is one of the reasons as to why blood is preferred by microbes). It does not allow colonisation of bacteria and due to the presence of hydrogen peroxide- there is an increased antimicrobial activity of Madhu. These are the properties of the Madhu that make it suitable for wound management. Gargling with honey and warm water can prevent gingivitis and flush out those bacteria that cause bad bacteria. Madhu is used in the cosmetic industry as a skin moisturiser and softener and helps heal damaged skin tissues.

In Ayurveda, honey is known by various names such as Madhu, Pushpa Rasa, Makshika, Kusuma Sava. Madhu is a product obtained from the bees and is produced in the stomachs of the bees that is regurgitated and stored in the combs. Madhu was used as a therapeutic resource by our sages from the Vedic civilisation. The honey-bee itself is known to be very sacred and these different names suggest reverence to not only honey but also to the bee. Madhu in Ayurveda means “Perfection of Sweet”. Madhu abhisheka is performed to the deities in temples. Madhu is considered as one of the five elixirs of immortality (Panchamritam).

Each bee produces a different type of honey. In the Charaka Samhita, Maharishi Charaka has divided honey into four types- Makshika, Bhramara, Paittaka and Kshaudra. Makshika is very sweet to taste and is of dark red colour. The Bhramara bee produces the Bhramara honey and is white in colour. The Kshaudra honey is produced by small bees and is of brown colour. The Paittaka honey is produced by large bees and is the colour of ghee.

Each of these types of Madhu have different characteristics and among them Makshika is the best type of Madhu. Pauttika is made from the nectar of very poisonous flowers and causes Ushna (heat), and increases the Tridoshas in the body. However, it reduces fat and is found to be useful in diseases like Diabetes and Dysuria.

Makshika is known to have the following properties- Laghu (light) and Ruksha (dry). It is used in jaundice (Kamla), Piles (Arsha), Phitis (Kshata) and cough (Kasa). Oudalaka is useful in skin diseases like leprosy and in poisoning cases.

Ashtanga Hrudaya explains in the following shloka the properties of Madhu:

The shloka tells us that madhu is very good for eyesight and can quench one’s thirst. It mitigates the effect of poison and stops hiccups. It is extremely beneficial in curing gastrointestinal infections, worm infestations, urinary tract disorders and is used to treat wounds.

Speaking to CSP, Dr Ramakrishna, an Ayurvedic practitioner and also the Vice-chancellor of Swami Vivekananda Yoga Anusandhana Samsthan, gave us a mountain of insights into the uses of honey along with textual content from the Charaka and Sushrutha Samhitha.

Maharishi Sushrutha has written 60 treatment modalities also known as Shashti Upakrama. Among these 60, application of Madhu is one. Among the different adjectives conferred upon Madhu, Anupana is one such- which means Madhu is given along with other drugs to enhance their activity. It has properties such as Lekhana (scraping), Shodhana (Purification), Ropana (Healing) and Sandhana (union)

Maharishi Sushrutha also gave out the difference between fresh and old Madhu. Fresh immature Madhu known as Navina Madhu aggravates the doshas and is sour in taste. Itmhas the property of Brimhana Gana meaning it is nourishing to the body and can increase body weight. Aged and mature Madhu known as Purana Madhu can pacify all the three doshas and is known as Grahi meaning anti-diarrhoeal, reduces fat and obesity.

It is used in the treatment of eye diseases, in the preparation of concoctions for respiratory disorders like cough, asthma, phlegm. It is said in Ayurveda that when an asthma patient is made to inhale Madhu, he can breathe better for at least an hour or so. Madhu contains ethereal oils and higher alcohols and the vapours are very soothing and beneficial to the asthma patients.

It is used in the preparation of a drug known as Vishnukranthi which is used in the treatment of peptic ulcers. Madhu controls the production of hydrochloric acid. Ayurvedic preparations prepared with ghee confer significant gastroprotective properties. Madhu is known to be a boon to those who have a weak digestive fire also known as Manda Agni as it can decongest and unclog the vital channels of the body.

Madhu is a storehouse of vitamins and minerals such as B2, B4, B5, B6, B11 and vitamin C, and minerals like calcium, iron, zinc, potassium, phosphorous, magnesium, selenium, chromium, and manganese. Madhu contains eighteen different amino acids and is loaded with natural sugars such as glucose, sucrose, fructose and thus is a better sweetener source than white sugar. It contains the enzyme catalase which confers anti-oxidant property. Interestingly, Madhu that contains pollen in it can act as a natural vaccine against seasonal allergies. When this Madhu is consumed, the pollen in it triggers the immune system to produce antibodies against it. This is stored in the memory of the immune system.

Madhu is known to increase the Ojas, which is the life essence. Raw Madhu is known to have the property of Lekhana – which is why it is very effective in reducing body weight, and when combine with Triphala can reduce Kapha.

In the treatment of chronic wounds or more commonly known in Ayurveda as Dushta Vrana. Madhu is a natural antimicrobial and anti-inflammatory. Honey is hygroscopic in nature which means it tends to absorb moisture from the air and has a very acidic pH which is what keeps the bacteria away (as bacteria require a more alkaline medium to grow in – which is one of the reasons as to why blood is preferred by microbes). It does not allow colonisation of bacteria and due to the presence of hydrogen peroxide - there is an increased antimicrobial activity of Madhu. These are the properties of the Madhu that make it suitable for wound management.

Gargling with honey and warm water can prevent gingivitis and flush out those bacteria that cause bad bacteria. Madhu is used in the cosmetic industry as a skin moisturiser and softener and helps heal damaged skin tissues.
Despite the advances in modern medicine, wound management is quite a challenge. Maharishi Sushrutha was aware of this issue centuries ago and incorporated Madhu in the treatment of wounds. In a study conducted in Jamnagar Gujarat where a seventy-year-old female was presented with a large wound across the shin area and was filled with pus. The leg was treated daily with a neem bark decoction followed by the application of honey and it was then covered with a sterile white cloth. She was also administered ayurvedic drugs orally for a period of 5 weeks. At the end of the 5th week, the wound had completely healed with a minimal scar on the leg. Madhu is very viscous and hence when applied forms a barrier between the wound and the outside environment. Madhu is frequently used in the prevention of hypertrophic scarring and post-burn contractures.

All these properties make honey an invaluable resource and one should incorporate this into their food to have a healthy immune system.

There are always precautions to be taken while using honey. Madhu is always used in its raw form for external and internal purposes as heat destroys its medicinal properties and can aggravate Pitta dosha.

Maharishi Charaka once said “Nothing is so troublesome as ama caused by the proper intake of Madhu”.

Consuming excess honey can cause a condition known as Madvama - indigestion of honey and this can be poisonous. It is said that no other kind of indigestion can be so difficult to treat unlike the indigestion caused by honey. It is very severe and can be fatal.

Hot water must not be consumed after eating honey. Some varieties of honey that are made from nectar collected from poisonous plants, can be fatal and if consumed with hot food can enhance the poison in the honey.

Here are some verses from the Vedas that talk of Madhu: