As My Health, Behaviour Improved Due to Yoga and Ayurveda, Many People Embraced Them Too: Claudia Gomez 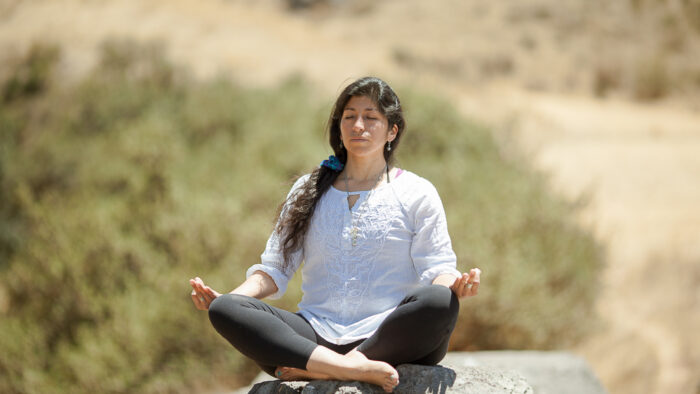 A biologist by profession, Claudia Gomez, started to practice and experience yoga in a Sports Club in Lima in Peru in 2004. Initially, it was a physical experience of the power of asanas. Over the years, her instructors took her step by step over other aspects of yoga, sharing their ideas and information, asking her to borrow books on Yoga and also asking her to teach in their absence.

A decade later, Ayurveda came into her life, at the suggestion of a yoga trainer.  Claudia says all these experiences were connected and soon she visited the Cultural Center at the Indian Embassy in Peru, where she had her first class with an Indian Yoga Teacher. She learnt about the YIC programme offered by S-VYASA, for which she applied and attended in November 2019.

Claudia says her introduction to Indian culture, was “not only through an asana practice, as some music was shared and messages about the scriptures were mentioned and discussed. However, I feel the exposure was stronger when Ayurveda knowledge appeared in my life. I was so fortunate that my yoga and Ayurveda teachers shared with me part of their knowledge about India.”

Claudia’s ancestors come from the highlands of Peru, which she says is similar to Indian culture. “Andean families are closely connected with nature and the environment since time immemorial. Likewise families are close knit and people practice mutual respect and solidarity, deeming their spirituality as paramount. Some ways in which this respect and care is manifested are the rites offered as payment to mother earth, gratitude to the sun, the moon and all living beings for the benefits we receive from them,” says Claudia.

In accordance with folk traditions, she says the people of Peru also don a lot of colour in their clothing, have a wide diversity in their music and a special appreciation for plants and flowers, just like it is in India.

Claudia’s first sessions as a facilitator were with students at the Cultural Center of her Municipality in 2014, then in a Sport Club - La Cascada - in Ayacucho in Peru, and finally at the IKAT Yoga and Meditation Center in Lima in 2019.  She says that people had two kinds of reactions to her interest in Yoga. “The first were people open to learning about different cultures and the second group thought that I was losing my mind or being ‘brainwashed’.” While many members of the first group benefited from her experiences and interest in yoga, the second group took more time to understand her affiliation for an alien culture. Claudia says that as her ‘health, temper, behaviour as as her way of dealing with life improved, many people started to embrace the change, she adds.

She was among those selected for Indica Yoga’s chanting scholarship. Claudia had learnt chanting as a yoga practitioner, and then during her higher studies, but mostly during her stay at S-VYASA University. She says of her chanting course, “I felt that when I practice it, its resonance transmits strong energy and a peaceful tranquillity in me. It is not easy, but I took it up as a challenge. It requires a lot of concentration, practice and patience. The process is gentle and every second is worthy.”

Describing her chanting course, Claudia says that in Shantala Sriramaiah’s classes, they learnt an “overview of the Vedas; several chanting rules with a great teaching methodology (including chanting notes, intonation patterns, force punctuation and conjugation and much more -  that facilitates follow up for people unfamiliar with Sanskrit) and of course a number of Mantras where all of the previously mentioned points were applied.”

Through the course, the participants, “have received a solid introduction with enough roots to continue our learning journey. Likewise, it would be my privilege to transmit what I have learnt with all beings willing to receive it. Incorporating chanting mantras into my teaching will definitely enhance my yoga teaching process,” adds Claudia.