What Can People in the US Learn From India? 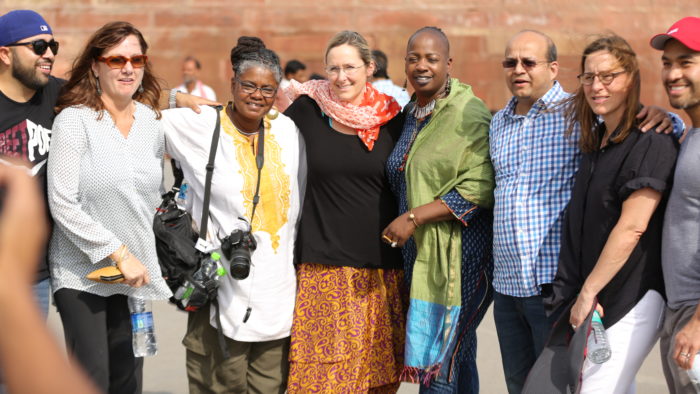 From India with Love (2017) (http://www.fromindiawithlove.org/our-film/) is a film inspired by Dr Martin Luther King Jr’s journey to India in 1959 to deepen his understanding of Mahatma Gandhi’s teachings of non-violence. By the time Dr King visited India, Gandhi had been killed and so the meeting between the two legends was not to be. For the Los Angeles based film producer Mandar Apte, bringing six Americans to India, whose lives were filled with trauma caused by the pain of violence, was a reaffirming of his belief that the wisdom and culture of India can heal pain not by looking outwards but inwards.

In King’s autobiography, Apte was inspired by the chapter titled 'Pilgrimage to India' which describes his transformational experience when he had visited India. “It was a revelation as no one had told me while growing up that MLK had made such a pilgrimage and how it had shaped his conviction to adopt the Indian philosophy of ahimsa or non-violence in the Civil Rights movement in America,” says Apte.

Rev. Bill Lawson, a Civil Rights leader in Texas, shared with Mandar, says that there was a new “inner peace, an inner calm” that he felt in MLK after his return from his 5-week trip to India. “There was something different in him. He was calm when all of us were panicking. And this was because of his trip to India,” says Lawson.

Every year in the US, nearly 13,500 people die from gun violence, 4,300 persons in the age group 10-24 are homicide victims, 43,000 commit suicide, 10 million are abused by a partner, and much more. Violence today happens in bars, neighbourhoods, movie theatres, in schools. Based in LA, Apte has given up a lucrative job at Shell, to start the Cities4Peace initiative of the Art of Living Foundation. Apte took victims of violence from across America on this transformational trip - the group included: a single mother whose son was brutally murdered in a tragic school shooting (Sandy Hook, Connecticut) and her best friend, a former gang member (Los Angeles, California), an educator (Newark, New Jersey), a social entrepreneur and a music scholar (both Black Lives Matter activists from Oakland, California).

For Scarlett Lewis, the worst fear in her life had already happened. Her son Jesse Lewis was murdered in his 1st grade classroom. “India has truly grounded me. During the trip, I felt the most hope since my personal tragedy because there was so much love that I received here,” says Scarlett. Jason Quezada, a former gang member in LA, says violence was second nature to him, a way of life. “I was like a kid who is in pain and I wanted the whole world to feel that pain.” His earliest memory he says is of his father pointing a gun at him, because he was angry at his mother. After the India trip, Quezada is inspired to become a meditation teacher and promote peace education in LA. He says the Sudarshan Kriya (breathing technique taught in the Art of Living workshops) has taught him to open up, where the rest of the world tells us not to be open. The trip also included Dr. Angela Wellman, an Advocate of the Movement for Black Lives and her partner Ashara Ekundayo, both shared how domestic violence was a large part of their childhood and how it affects our behavior.

Since the documentary was released, Apte has brought several groups to India including US Mayors and law enforcement officers. Lt. Lakesha Burton (Jacksonville, Florida) has been a police officer nearly two decades. She shares that the stress among police officers is very high resulting in suicides.

After her trip to India, she say “I understand now what ahimsa – non-violence- is. What can the people in the US learn from the people in India? The first thing that comes to my mind is appreciation. The people of India have inner peace and genuine love. We in the US, need to feel that kind of love - that is the key to ending violence. Since the trip to India, I now have a greater appreciation for human life,” says Burton.

Jim Evenson, a lieutenant with the Rochester Police Department, has been a police officer for three decades. He says, “Some of the things that we have to do, some of the things we see, and some of the people we deal with, it is hard to rationalise this behaviour and so police officers become closed off to people in their lives. It is hard to go back home and talk to your wife about the 15 year old who earlier in the day blew his head off with a shotgun.”

Evenson says that the biggest thing he learnt from India, was that in order to be better people, “we must first know ourselves.” “We have to be centred in our own minds and know ourselves. The breathing exercises enable one to center oneself after a long shift.”

What does the Cities4Peace programme mean to him – “I think it comes down to one person at a time. If I can start with myself, being a better person, being more in tune with myself, which makes me a better husband, a better father, a better police officer.”

Having personally lived outside India for nearly two decades, and also travelled across the globe, Apte believes there is indeed something special with India. “It has always been the land of spiritual transformation. Hence I say if the whole world is a home, India has always been the prayer room that has time and again provided room for reflection and transformation. Not only Dr King but several business leaders have spoken about their transformation while they were traveling across India. Travel to a foreign land in itself can transform our perspective, as we look at our problems with a new lens. However, the way spirituality (or humanity) is integrated into every aspect of India's ancient traditions, festivals, and culture makes it a very special place,” says Apte.

It is the idea of controlling one’s breath, which Apte tries to impart. He learnt this at the Art of Living workshop in Houston in 2002. “The fact that every emotion has a breath pattern of its own and that with breathe work we can manage our emotions was awesome. As an engineer, I found this simple, yet profound and universal.”

The Los Angeles Police Department (LAPD) hosted a community screening of the film followed by a workshop on nonviolence that Apte facilitated.

Apte and his team have developed a peace education curriculum that uses the From India With Love film as a conversation catalyst. They aspire to bring this to 1000 schools across America during the 150th birth anniversary of Mahatma Gandhi.

This film serves as a potentially very powerful tool for introspection, for the need of peace education in schools, as well as for improving Community policing, opening of possibilities of the simultaneous transformation of the public and law enforcement through India’s ancient practice of meditation, by focussing on the breath.

(From India with Love can be viewed in the UK and US at http://www.fromindiawithlove.org/our-film/)