Vijayanagar Waiting for its Place Under the Sun 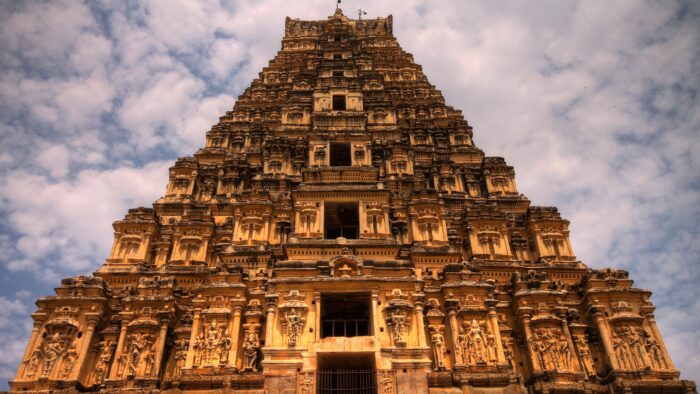 Vijayanagar gets ready to become the 31st district of Karnataka in India, even as we begin marking Heritage Week. Krishna Devaraya, the 19th generation descendant of the famed Vijayanagar king Krishna Devaraya, talks about the importance of conserving and preserving Hampi, not just architecturally, but also in spirit as a prosperous Hindu kingdom whose rulers fought valiantly to ward off the attack by the Delhi Sultanate. To many, including Krishna Devaraya, Hampi is a punya kshetra and not just a World Heritage Centre. Any master plan to revive it must not miss an opportunity to explore this truth.

Living in Anegundi, earlier known as Kishkinda, Krishna Devaraya’s family especially his father Raja Achyuta Deveraya made great efforts to preserve what is left of this great heritage. Krishna Devaraya has restored the family home of the rulers of the Vijayanagara empire.

The world knows well the beauty of Hampi, even though today it is seen only through its ruins. Only empty echoes are left of the famed bazaar on whose pavements gold and diamond were sold, the proud tower of the Virupakshi temple standing among the ruins of other temples, the bridge across the river Tungabhadra connecting Hampi to Anegundi, the seat of music and culture, boasting of a culture of wealth, welfare and tradition. What can modern India learn from the Vijayanagara empire? Why is it necessary to preserve this heritage and remember this past?

The Vijayanagara empire was founded to protect Hindu Dharma. The underlying principle was not protect only Hinduism, but also to protect all sects, faiths and to provide the freedom of worship which is the essence of Hinduism. The Vijayanagara kings right from its foundation followed this noble policy.

A nation’s greatness is not measured by its riches or its military power alone by its character. An age-old culture that is still living is the characteristic of India. India is alive if her culture is alive. The family system is the fulcrum of that system. Therefore, if parent s at home don’t practice values, we cannot expect our children to imbibe them.

Our primary duty is to have a sense of history without which a sense of belonging to this great nation cannot be roused. Indian history is not a book of tales of a few kings who lived and died. It contains the records of men and women of incredible prowess, and character; it is a chronicle of the deeds of men who became super human through their penance; it is a compilation of scientific truths that sing about the secrets of creation, and most importantly it throbs with message that help us graduate from a mundane existence to a spiritual life.

Conservation is a subject of great interest to Westerners. The French are investing a lot of money to preserve structures built during French colonisation of India. Whereas Indian authorities shy from giving conservation its due whether to ancient buildings or manuscripts. As the scion of the Royal family what are your thoughts on preserving artefacts and structures.

Personally, I feel many Indians are yet to realise the value of our culture or heritage. We just follow the West blindly instead of picking and adopting aspects that are suitable for us.

What I observed in the US, when I was working there was though it does not have a history of 300 years, they still perserve what little they have and document it properly. Whereas here we have so many monuments and manuscripts and we are least bothered about them.

My parents have been instrumental in protecting and conserving heritage in their own way. They wanted to restore our house and bring it back to its past glory. All the carvings and designs in lime mortar that you see in my house are from Anegundi and Hampi. My intension was to preserve all the designs and continue the same line of art and architecture.

What areas of the erstwhile Vijayanagar empire are now under ASI?

Hampi is spread across 41 sq km. All the monuments come under ASI.

There is an ASI central, ASI state, HWHAMA, UNESCO and local Panchayat but still the monuments are not protected properly. For me Hampi is not a tourist destination but a Punya kshetra. It is called the Dakshina Kashi, The main bazaar in front of the Virupakshi temple was demolished in 2011 but nothing has been done to restore it.

I have been hearing that a master plan is in place and it needs to be implemented soon or UNESCO will take away the world heritage tag from Hampi. There is a lot to be done, I would like to start a library, museum and information and cultural centre in Anegundi, help scholars who want to do research here, start some organic farming project and encourage and promote construction using lime and mortar.

These are just some of the things that like minded people should come together and do to make this country great once again, like it was in the past.

From the kitchens of Vijayanagar Anegundi