Thirukkural to be part of Cambodian school syllabus 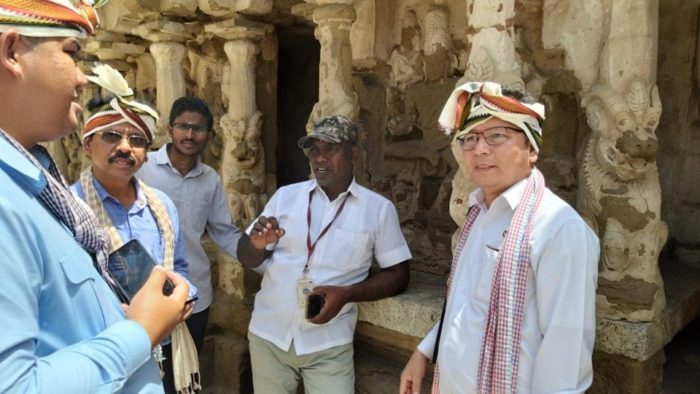 Students in Cambodian schools will learn Thirukkural as part of their syllabus, announced representatives of the Cambodian government and Pannattu Tamilar Naduvam earlier this year. The ancient text written in Tamil will be first translated to Cambodia's official language, Khmer, and then incorporated into Cambodian school textbooks.

Thirukkural, written by a revered Tamil poet and philosopher Thiruvalluvar, consists of 1,330 couplets or Kurals (two-lined poems) outlining the fundamental virtues of an individual. Also known as 'Ulaga Podhumarai' (universal code of life), it is one of the oldest Tamil classic texts and one of the most translated literary works in the world.

Thirukkural consists of three books, the first on Aram – (the Way or Dharma), the second on Porul (Material or Artha) and the third on Inbam (Joy or Kama). There are 37 chapters in the first book, the first four called Payiram, the next 22 about Ill-aram (the householder’s Dharma), and the next 13 about Tiruvaram (the path of renunciation). The second book on Porul contains 70 Chapters, the first 20 dealing with Kings and their duties, the second 32 with other matters concerning the state and the next 13 with general matters. The third book on Inbam contains 43 chapters on love.

In June this year, Cambodian representatives visited Tamil Nadu to explore the ancient temples of Kancheepuram, Chidambaram, Thanjavur, and Mahabalipuram. The purpose of their visit was to discover solid evidence of a historical link between the Pallava dynasty of India and the Khmer dynasty of Cambodia.

The Angkor Thamil Sangam and Pannattu Thamilar Naduvam along with the Cambodian Ministry of Culture and Fine Arts, and Seenu Gnanam Travels are planning to unveil the statues of Chola emperor Rajendra Chola and Khmer emperor Suryavarman I in Siem Reap, Cambodia in May 2022 to commemorate the friendship of these two great kings in the region. Around 25,000 Tamils across the world are expected to attend the event which would strengthen India and Cambodia’s bilateral relations, a press release said. Mourn Sopheap and Prom Khemara who work at the Cambodian Ministry of Culture and Fine Arts visited the Kailasanathar temple and Vaikundanathar temple in Kanchipuram, Big temple in Tanjore, Shri Natarajar temple in Chidambaram and Mamallapuram temple. They expressed happiness in finding lot of evidences establishing the historical links between Khmer Dynasty and Pallava Dynasty.

After visiting the historical sites, the officials from the Cambodian Ministry expressed that they have strong feelings that the Khmer emperor Mahendravarman in sixth century had been the ruler of Pallava Dynasty at the same time as well.