The Study of Conciousness is the Future of Yoga: N V Raghuram 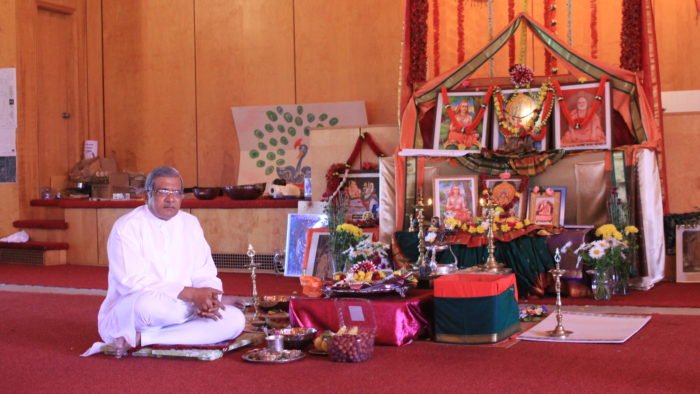 Yoga today has reached all parts of the world and is a household name. Yet there are many Yoga gurus who believe that we have but scratched the surface of what Yoga can offer. Yogashree N V Raghuram, an international ambassador for Yoga through both S-VYASA and his own organisation Yoga Bharati, compares it to a pyramid where asana lovers form the base, and those who aspire to move towards inner Consciousness are at the tip.

He will be presenting a talk as part of Indic Yoga on Health and Wellbeing: Yogic Perspectives on Saturday, June 6 at 4 pm. Please register by sending a mail to indicayoga@indica.org.in.

In this interview Sri Raghuram talks about the path Yoga should take hereon.

What are your thoughts on the growth and spread of yoga around the world?

It is good to see the growth of Yoga around the world but what is much more important going forward is that slowly it should become a holistic approach to Yoga rather than just the physical practice. Secondly, we need to start seeing Yoga as a tool to change the obsession with material culture around the world. Once that is done, inner development takes place and then perhaps the real purpose of Yoga can be achieved.

What has been the role of traditional gurus in imparting yoga as received from our sages?

Even now I see that many traditional gurus who are imparting yoga are doing it as if it is their own developed and patented practice. Some yogis even say that they have developed a new yoga. There cannot ever be any ‘new yoga’, whatever is there is in the tradition itself. The only thing we do is perhaps put a few pieces together in a novel way. What Patajali has given as the Yoga Sutras, where he defined Yoga, is also what already existed in this culture for thousands of years. He put them together in the form of sutras. So no one can independently give any Yoga. We can only give a few techniques. Unfortunately, what is being claimed now is resulting in yoga teachers becoming more and more exclusive.

What is the role of big institutions like S-VYASA in promoting Yoga?

S-VYASA has taken up two important areas. One is the area of research and the other is the medical application part through their hospital. These two are their main areas of focus.

But we need a lot more work in other areas including seeing Yoga as the means for an inner journey and exploring Consciousness, etc. We need to pay more attention to the study of Consciousness, how to connect modern science with the inner journey which Yoga facilitates. In the future, that should be the focus of Yoga.

One of the most important features of the human race is that we have emotions and out of these emotions, as Narada puts it and as our scriptures put it, the most wonderful divine emotion we have is the idea of love - a soft emotion which manifests in the form of compassion, etc. Bhakti is a method of seeing how we can harness these soft emotions that we are born with, to see that we can get the ultimate experience. That is why Narada while describing Bhakti says it is an enriched state of love - Parama Prema Rupaha. Unfortunately, the most mistaken word in the world is the word love or prema.

I think in the future, in this broken world, the only thing that can bring people together into one beautiful whole, without losing one’s individuality while at the same time being compassionate, is Bhakti Yoga. It is the most important tool. All our yoga teachers, and there are millions of Yoga teachers around the world now, should come out with the mat and start practicing Bhakti Yoga. Bhakti Yoga is particularly important in an age where everything is ruled by the intellect and we know that intellect cannot solve all the problems. We should turn to emotions and that is where Bhakti Yoga plays an important role.

How are we to understand Yoga chikitsa as different from other wellness systems?

Yoga chikitsa is a very important method of giving health not from outside but from within. Health is our own nature and we need to get into that state. The very definition of Yoga is going back to the self. Going away from the self is vritti. In that context, going away from the self is sickness and going back towards oneself is health. Yoga chikitsa should focus not just on certain practices for curing ailments but also on promoting a lifestyle which is devoted to going towards oneself. rather than merely reacting to the world outside. If this can happen, Yoga chikitsa can have a great impact on society.

What is the role of Indian Yoga trainers going abroad?

We have to admit that we cannot compete with non-Indian yoga trainers with the way they perform the physical postures, in terms of accuracy and the stamina with which they do it. That should not be the purpose of our approach towards Yoga. Our teachers should equip themselves with the deeper concepts given in the Bhagavad Gita and other texts of Yoga including Yoga Pardipika, Patanjali’s Yoga sutras and Narada Bhakti Sutras. Once you have a grasp of these texts, then you will understand Yoga better than persons who belongs to a different culture. A lot of cultural background is necessary for understanding these texts which are the primary sources of Yoga. Our Indian teachers should not just focus on the postures and anatomy and physiology, they are important, but much more on what is the philosophical background. More and more in the future, Indian yoga teachers need to see how they can build a very strong, very stable philosophical basis for the path of yoga that they are teaching.

How can India contribute to the study of Consciousness?

Ours is the only culture which can throw light on the idea of Consciousness, in a deep manner. In the West, the idea of consciousness is still in the nascent stage. Nowhere else have they spoken about coming out of the attachment to the material world. India We should not shy away from being able to say “I don’t have many things, but I am a rich person, I am a satisfied person.” We should be able to say that with confidence and should be the leaders in the world in that direction.

I always think in terms of a pyramidal model which has a large base and which tapers as it goes to the tip. Everyone who is doing Yoga practice at the gross level - the body level - comprises the large base, not only in the West but also in India. Once you create a large base, the pyramid goes on rising up. There are very few people on the top who can convey the whole Yogic philosophy, who can give people the idea of the inner being and yet participate in the world outside, not with any negativity, but minimally. This way can bring about a change in perspective around the world.
The only way to ensure a better world is the growth of the individual towards his inner nature. Yoga is a powerful tool, perhaps the only tool to create a better world outside, provided we do not limit the reach of Yoga to only physical postures and breathing exercises. That is the message of Ramakrishna Paramamsa, Swami Vivekananda, Sri Aurobindo and all the sages who lived here. That is why again and again we say in this culture - Om Shanti Shanti Shanti - Peace here, Peace Now, Peace Beyond and Peace from the Past.