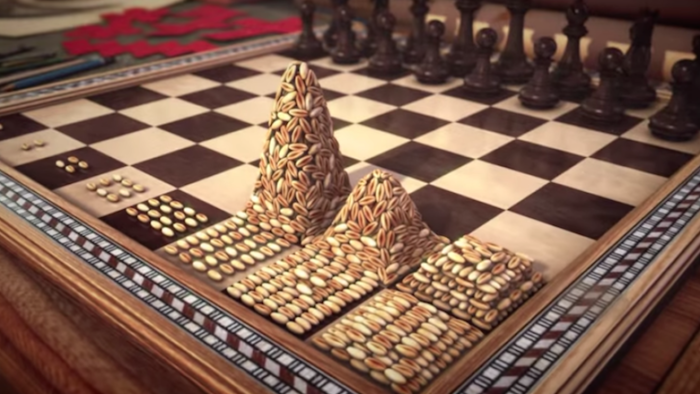 Once upon a time many centuries ago (at least more than 1,500 years ago) in India, according to a folklore, a sage gifted a game of war, which he had invented, to a king. This game was chaturang (Sanskrit for Chess). Chaturangi sena (army) means an army consisting of all the four units - infantry, cavalry, chariots and elephants.

The king was extremely delighted to receive this game. He told the sage to ask for any gift he wished. The sage asked the king to give him as many grains of wheat that would fill the chess board in a manner that the first square contains one grain, the second 2 grains, the third 4 grains, the fourth 8 grains, and doubling the number of grains in each successive square till he reached the last square i.e. the sixty-fourth square.

The king smiled at the sage's request for such a small simple gift, when the sage could have asked for anything expensive or precious. The king soon realised that the entire annual grain production of Bharat varsha (then undivided India) wouldn't satisfy the sages demand. Actually the amount of wheat demanded by the sage is more than the entire world's wheat production for more than 2000 years. The king was horrified that he wouldn't be able to honour his word. But the kind sage forgave the king. The king told the sage that he was even more delighted by the sage's mathematical trick then the game he had gifted him.

This story is very popular since many centuries. Even Nobel laureate Physicist George Gamow had written about it in his book "One, Two, Three,..., Infinity".

You must be wondering how I arrived at the correct answer. It is thanks to ancient Indian mathematics.

Ancient Indian mathematicians had fascination for large numbers and calculations. The first mathematician to give the formula for the sum of numbers in a geometric progression was a Digambar Jain monk Mahavir (815-877 AD) in his book Ganitasarasangraha written around 850 AD. Then, it was Bhaskar II (born 1114 AD) who gave the formula for the sum of terms in geometric progression in his book Lilavati, written around 1150 AD.

Let us now understand how they derived the formula:

'a' be the first term in the series

'r' be the common ratio

'n' be the number of terms in the series

and let 'S' be the sum of the series.

Bhaskaracharya illustrates the above formula with an interesting problem in Lilavati.

A gentleman gave 2 C (cowries) in charity the first day and thereafter he gave everyday twice of what he gave the previous day. How many N (niskas) did he give away in one month?

Note: cowries (shells) and niskas were the prevalent currencies during the time of Bhaskaracharya.

Listed below is the conversion table for the currencies

Let me end with a quote on ancient Indian Mathematics by a Swiss-American historian of mathematics, Florian Cajori (1859 - 1930)

"The Hindus solved problems in interest, discount, partnership, alligation, summation of arithmetical and geometric series, and devised rules for determining the numbers of combinations and permutations. It may here be added that chess, the profoundest of all games, had its origin in India."

* Alligation is a rule that enables us to find the ratio in which two or more ingredients at the given price must be mixed to produce a mixture of desired price or quality.