The Day I Understood Why My Civilisation Survived 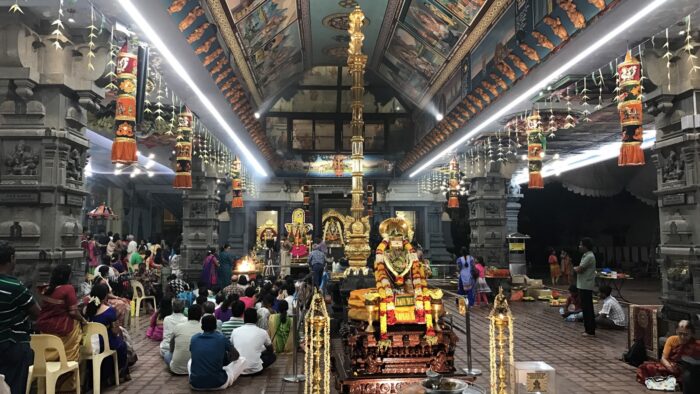 I remember this day four years ago in Singapore when I came face to face with a truly timeless civilization.

Exploring India’s history had become the central mission of my life and I was writing a series of essays on the educational heritage of India which later became a book. While the intellectual aspect of Hinduism had appealed to me immensely, the Bhakti aspect had not caught me yet.

Unlike Christians who go to church on Sundays and Muslims who go to mosques on Fridays, Hindus have largely been free to establish their own unique relationship with Bhagwan. There is no coercion when it comes to religious beliefs and this is why I was happy to be Hindu. But I really did not know much about traditions or the role they played.

“I only visit temples if they have some history.”

“I only go to temples when there is a nice dinner served.”

This was me until just a decade ago. In school-going days when my parents planned vacations, I would push for hill resorts and historical forts in Himachal Pradesh and Rajasthan but shoot down plans to visit the shrines in Vaishnodevi and Kedarnath.

As the elders say, things happen only when the right time comes.

I knew that Mahashivaratri is an important festival in India that celebrates various aspects of the divine personality of Shiva — as the Destroyer, the Meditator, the Cosmic Dancer, and the Eternal Lover of Parvati — the female form of the divine who is equally revered in Hindu traditions. For Vaishnava Hindus who see Vishnu as their ultimate Bhagwan, Shiva is another dear Bhagwan and His blessings are sought.

I also knew that many Hindus stay up the whole night on Maha Shivaratri after fasting the whole day. My family did not do anything elaborate for Maha Shivratri; my mother would do some puja and tell us all to think of Shiva, which I did somewhat mechanically. However, there was a Shiva Stotra she played on our tape recorder (later on our stereo system) in the deep voice of Pankaj Mullick which gave me an inexplicable sense of devotion. It often made tears roll from my eyes and I could not make out head or tail of why it happened. That song which she played on just one day every year has stayed with me till this day and I play it for my husband and daughter on every Maha Shivratri. Some amazing person has uploaded it on Youtube. https://youtu.be/d0OF1Ejr2RE

One day in 2017, my friend Ramya wrote on Facebook that she was going to organize a temple tour in Singapore on the occasion of Maha Shivaratri. She wanted to know who was interested. I was one of the early respondents. Let’s see what people do when they stay up a whole night for Shiva, I thought.

What was first planned as a few cars going from temple to temple turned into a 45-seater bus. Nine temples were selected in Singapore, none of which I had visited in 13 years of my stay!

What a night it turned out to be. From 10 pm to 5 am, I witnessed the magic of a civilization that had preserved its spirit down the ages. As the bus rolled into the night, I realized that I had never experienced Singapore with a Shiva consciousness. It felt surreal. Was it the same Singapore that was so business-like in the day? The ladies in the bus sang beautiful Shiva bhajans and stotras as the bus made its way to the temples. https://youtu.be/4aTlkJy9B3I

Each temple I visited had a character of its own even though none of them was as ancient as the ones in India. Some were spacious and well laid out, others were small. Some stayed true to Indian forms of architecture, others were influenced by Chinese and modern forms. Most temples had all the major deities. If there was a Homa (fire ceremony) happening in one part of a temple, there was a Mangalaarti going on somewhere else. Shiva lingas were being lovingly washed with water and milk (abhisheka). Sounds of nadaswaram and thavil evoked a feeling of momentousness. Light from Homas, Deepa kambhas and Mangalaarti deepas created hypnosis. Smells of incense, flowers, prasada floated in — they sparked memories of a million moments of some part of my childhood and adulthood that had been hidden away in the recesses of my mind. https://youtu.be/DUfRq9uW_dU I saw Hindus from every sect, every class praying, lost in their inner selves, reciting from their own books, sitting in silent meditation — they all seemed to be traversing their dharma and karma. Many looked like construction workers away from their homes and families. Others looked like local citizens of Indian origin who had lived in Singapore for a long time. And of course, there were immigrants like me — engineers, chartered accountants, bankers, writers, professionals. Generous donors had ensured there was delicious Prasada for all of us to eat. It was oneness I had never experienced before but which seemed very normal for those who had been following these traditions for years.

I’ve often stayed awake at night to finish writing articles, to take thermometer readings of sick family members, to catch flights and wait at lounges. But to stay awake for Mahashivaratri along with millions around the world is a different experience. Why had it taken so long for me to understand that congregating in large numbers for a festival, for a deity, for Dharma was such a beautiful thing? I was perplexed that I had distanced myself from all this. If a simple temple tour in Singapore could be this invigorating, what would teerth yatras to sacred sites like Kedarnath, Badrinath and thousands of others in India be like?

It suddenly struck me why we Hindus had not become extinct like the pagans. The brutal onslaughts of invaders and colonizers had extinguished the religions of Egyptians, Persians, Mesopotamians and Native Americans. No one knows what hymns they sang to their Gods or the rituals they followed. Their Gods became false gods with a small ‘g’. They had all been subjugated by monotheistic cults.

We Hindus survived because of the faith of simple people who did not give up devotion. Our temples would be destroyed but we would rebuild. The images of our Devatas would be shattered but we would start with clay or metal all over again. Gurus kept teaching us and healing our broken spirits. Chanting the thousand names of our beloved deities we never stopped dedicating our art, literature and even our science and mathematics to them.

Wish you all a happy Maha Shivaratri! (Sahana Singh is an author, editor and columnist who writes on a variety of issues including water management, environment and Indian history. She holds a Bachelor’s degree in Civil Engineering and Master’s in Environmental Engineering from Delhi College of Engineering. This article was first published in Medium.)