Sivapadam – Many Dances in One at Angkor Wat Temple in Cambodia 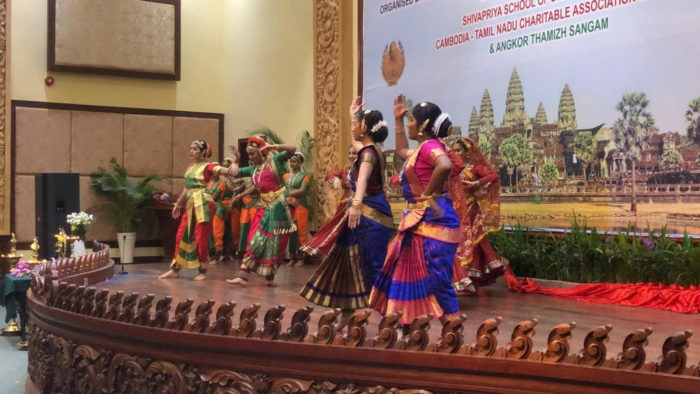 The Global Naatya Festival held between January 24th to 26th at Angkor Wat temple complex in Cambodia saw a troupe from the US performing Sivapadam, a unique show bringing multiple Indian dance styles Kuchipudi, Bharatnatyam, Oddissi, Kathak and Andhranatyam on one stage.

Government of Cambodia officials including the Director of Culture and Fine Arts Siem Reap - Mourn Sopheap and Mr Prom Khemara, official from the Provincial Department of Culture and Fine Art- Siem Reap, were witness to a show where all the main classical dances were showcased on the same stage. The Angkor Wat temple reverberated with beautiful Indian dance songs starting with Sivapadam and ending with Maitreem Bhajatha composed by the Shankaracharya of Kanchi Mutta Chandrashekarendra Saraswati for Carnatic vocalist MS Subbulakshmi to sing at the United Nations.

Producer of Shivapadam Vani Gundlapalli says “My experience with Shivpadam is that most people in Cambodia and around the world are aware about Bharatanatyam and Kuchipudi and less with the others forms of Indian dance. In our production, students from different schools came together and took different verses and showed them in a different dance form.”

Vani says this is a good thing for Indian dancers too as, “we tend not to know about other dances. South Indian will go and watch Bharatanatyam and Kuchipudi and don’t know much about Odissi, Kathak and Mohiniattam. These songs are in Telugu and Sanskrit and through this we are also giving them exposure to different languages and culture.” During Shivapadam, Vani says a girl who is learning Kuchipudi went to her mother and said she likes Odissi and wants to learn it. “Until then the parents were busy in taking the children only to Kuchipudi classes and concerts as she was learning it. Similarly the Odissi students want to wear the Bharatanatyam dress and learn a piece.

The difference is in the dance forms is not only in the Abhinaya but also in the steps. “We took Hrudayame Kailasa yantram where we took the pallavi and repeated it five times in five different styles. Then Odissi and Bharatanatyam dancers did a jugalbandhi, then Kathak and Kuchhipudi did a jugalbandhi, Then all of them came together and did the final stanza,” says Vani

People world over are looking for new experiences in art and it is up to artistes and organisers to offer novel experiences “Even when we did the two hour show in Bay Area and Singapore, people sat still for two hours even though some said that they didn’t know the art. They are enjoying the variety that is being offered,” says Vani.

In the festival in Cambodia, even last year only Bharatanatayam and Kuchipudi were performed. “India has a wide variety of dances and we want to emphasise that. So far we have done around 7 shows all over the world including India, Singapore, Houston, San Jose, and one in Cambodia.”

Gurus in the US who trained the students include: Rasika Deshpande, Chandna Veturi,Pragya Dasgupta, Chinmayi Arukala, Dipanwita Sengupta, Sima Chakraborty and Meenakshy Bhaskar.

The organisers from Angkor Tamil Sangam took care of the artists from hosting them to taking them to local temples (including the Bayon, Ta Promh, 1000 Lingas).  The troupe thanks Tamil Sangham of Siem Reap, including President Srinivasarao, Vice President M Rameshwaran and Secretary R Gnanasekaran.