Santhana Dharma is Poised to Create a New Awakening in a World full of Chaos: Dena Merriam 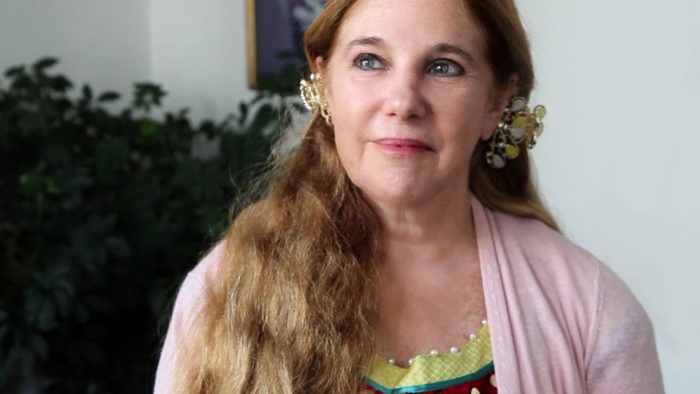 Dena Merriam began her work in interfaith work 20 years ago and found that there were almost no women engaged in interreligious dialogues, and the Hindu and Buddhist communities were also absent.  She founded the Global Peace Initiative of Women to provide a platform for women and the Dharma traditions to play a larger role on the global stage. Over the years the organization’s vision has expanded to create better understanding of the Dharmic traditions

Dena Merriam feels it is very important that women are a part of the Inter-faith dialogue. Personally, Dena is a worshipper of both forces – the feminine and the masculine.

“On a personal level I am a devotee of Narayan and Narayani. (But I also love Lord Shiva and Mata Parvati!)  So Devis are a central part of my worship.  In our work we also try to balance the presence of the masculine and feminine divine energies.  We recently organized a conference on Mata Sita to raise awareness of the divine role she played in the unfolding of the Ramayana.  But the narrative is really about the complementary nature of the masculine and feminine, each balancing and supporting the other.  So while I worship the Devi, I equally worship the Deva.  To me they are one reality appearing as two.

I founded the Global Peace Initiative of Women to provide a platform for women and the Dharma traditions to play a larger role on the global stage.  The idea at that time was to bring spiritual resources to places of need, in particular conflict.

The Divine consciousness manifests through both feminine and masculine aspects but most organized religions have suppressed the Divine feminine qualities.  One of the special aspects of Hinduism is that it has not suppressed but rather celebrated the Divine feminine through the many Devis. Women gurus are a reminder of these qualities, which may be equally present in male gurus.  I think it is less an issue of gender than of the qualities being reflected in the guru.

My own guru, Paramahansa Yogananda had many motherly qualities. It is very important for the spiritual attainment of women to be recognized.  For too long great women spiritual teachers have been assigned a secondary role.  For example, the women sages married to the great rishis of the past are known only as their wives and are celebrated for being “chaste and devoted wives”, rather than being celebrated for their spiritual attainment, which most often has been on par with their male counterparts.  The same can be said of Mata Sita, who was not just the devoted wife of Shir Ram.  She, along with Shri Ram, helped set the foundation for a civilization based on dharma, and her role was equally vital. Mata Sita was the expression of unity with the natural world and it may be said that some women spiritual teachers have a heightened awareness of this oneness with nature.

About 20 years ago when I first got involved in interfaith work, I found that there were almost no women engaged in interreligious dialogues, and the Hindu and Buddhist communities were also absent.  Interfaith was essentially a world of Abrahamic men talking to one another.  So I founded the Global Peace Initiative of Women to provide a platform for women and the Dharma traditions to play a larger role on the global stage.  The idea at that time was to bring spiritual resources to places of need, in particular conflict.

Our work has evolved greatly, and we no longer focus on women or on conflict, and we now work extensively with the Hindu and Buddhist communities helping to create greater understanding and recognition of these traditions. Historically we have also focused on raising awareness of the Divine Feminine, and this is still a theme in our work, but it has grown into shifting consciousness so that we come to see the earth and all of the natural world as sacred.  I would say the essence of our work is the raising of consciousness, helping the human community to evolve.

The role of the Guru is one of the most important aspects of being able to move to a higher understanding of consciousness and Indian traditions have always maintained that only the Guru can dispel darkness.

“In the religious world, the word “guru” is used very loosely today and often is applied to any teacher. But the true meaning of a guru is one who can lead the disciple from darkness to light, from ignorance to self- realization, from illusion to full awakening, and this is a rare capability.  The transmission of spiritual knowledge, the process of awakening to one’s true nature, comes about through the blessings of the guru. This is a spiritual law and is as true today as at any time in the past.

That guru does not have to be in a physical body but the spiritual connection must be made.  To be a guru and to be able to awaken one to his or her true identity, one must have reached a high level of realization oneself.  There are many teachers who can provide guidance and offer meditation techniques, who can point one in a direction and take one along the path, who can give inspiring talks and do much good in the world, but at any one time, there are only a few true gurus on earth who have attained this high level of realization.  Today we see many teachers who have built large organizations with extensive followings but who may not be an awakened guru according to the criteria I have described.  The role of the guru has not changed over the millennia and is still a necessary part of one’s spiritual unfolding, but in the crowded spiritual marketplace of today one must develop the discernment to recognize that rare soul who can foster within the devotee true inner transformation.”

Sanatana Dharma switches the spotlight from without to within and shows us how to realize our being as Sat Chit Ananda – ever existing truth, consciousness and bliss.  That is our true nature and is the only means of true happiness.

Santhana Dharma is poised to create a new awakening in a world full of chaos and conflict.

“I most certainly believe that Sanatana Dharma has a tremendous role to play now in the spiritual awakening that is crucial for our evolution and even survival.  Sanatana Dharma is not based on belief in doctrines but is based on enabling the individual to awaken to one’s true nature, and it provides the means for this experience.  So many of our individual and collective troubles today are based on the illusion that material objects bring happiness, but again and again we feel the disappointment and pain such pursuits engender, and in the process we are destroying the very life systems on which we depend.  Sanatana Dharma switches the spotlight from without to within and shows us how to realize our being as Sat Chit Ananda – ever existing truth, consciousness and bliss.  That is our true nature and is the only means of true happiness.

Dena’s journey into serious meditation began when she found her guru Paramahansa Yogananda at the age of 20, and it has become a central feature of her life in this birth.

“Over the years I have experienced a significant change in how I perceive life and how I identify.  Many very specific memories of numerous past lives have emerged so that I no longer identify as this one personality of Dena.  I remember meeting my guru in past births and receiving guidance from many great teachers, women and men, who have guided me, step by step, to where I am today.  I am the summation of all of those lives, but my journey is not yet complete.  I see death as a return to a home where I can process my learnings and lay the blueprint for the next life where I can continue to fulfil unresolved samsaras and walk further down the path of awakening.  But increasingly the focus is not on self but how to help with the collective awakening so that our human community can evolve toward greater wisdom and love.”