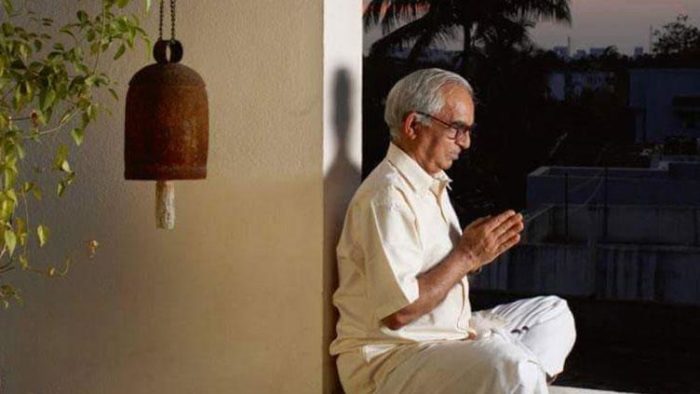 T K V Desikachar, born on June 21st, was the son and student of Sri Krishnamacharya, and the founder of the Krishnamacharya Yoga Mandiram. His father was one of the greatest Sanskrit scholars, healers and yogis of modern times.

His father became a Sanskrit scholar because it was a family tradition. Their ancestors were advisors to even kings. Their role was to tell the ruler what was right and what was wrong. A special love for yoga was fostered as they were descendants of the famous yogi Nathamuni.

In an interview, Desikachar says about this father: “It is normal for someone with a family tradition like this to become a great Sanskrit scholar and to be versed in the literature and religion given to us in the Vedas. But because his teacher said to him, “you must spread the message of Yoga,” he became a yoga teacher.”

Desikachar says that because of his father’s interest in religion, especially in his own tradition of the Vaishnava, Krishnamacharya came across the teachings of some of the great yogis of South India. “These people are called alvar, which means ‘someone who has come to us to rule.’ Alvar direct the minds of other people and are regarded as incarnation of God….Sri Krishnamacharya studied the writings of these masters, which are in our language of Tamil, and so discovered the meaning of yoga as it is understood in the south of India. That is how he could combine the great teachings from the North, learned from his teacher in the Himalayas, with the great teachings of the South, which come from our Tamil master, the alvar.” Wanting to learn everything about the Vedic darsanas, Krishnamacharya went to Kashi and then to Tibet on the recommendation of his guru Ganganath-Jha. He would become well known as a healer, and even healed the British governor suffering from diabetes before going to Mount Kailash.

Desikachar comments on the connection between healing and yoga. “Illness is an obstacle on the road to spiritual enlightenment, that is why you have to do something about it. There are many ways of treating sickness through yoga; sometimes a mantra is needed, sometimes a change of diet, sometimes certain asanas, and sometimes pranayama.”

Krishnamacharya learnt the science of Ayurveda from Krishna Kumar in Bengal and would always take the pulse of anyone who came to him. Desikachar inherited this desire to heal from his father. The Krishnamacharya Yoga Mandiram in Chennai is a hub for healing through Yoga, not just for physical ailments but also for mental and spiritual calm.

Says Desikachar of the family’s unique tradition of yoga: “What makes my father’s yoga technique of yoga unique is his insistence on attending to each individual and to his or her uniqueness. If we respect each person individually, it naturally means we will start from where each person currently is. This requires many different approaches; there is not just one approach for everybody.”

Desikachar goes on to say that modern yoga practices believe that there is one solution to everyone’s problems and one treatment for every illness. He said this does not mean that the teacher should give only private classes but that each student should be able to find their own way to Yoga. Sounding very J Krishnamurtisque, he says, “I have to realise that that each of my students is not the same person today as they were yesterday, and not at all as when they came last week, with similar questions.”

In the Krishnamacharya tradition, he says there is no organisation and the individual must find his own structure. One must not obstruct progress in the path of yoga by putting goals. “Yoga serves the individual and does so through inviting transformation rather than by giving information.”

Asked about the role of asanas, he says that Yoga was not just a physical practice in their parampara. For them, “Yoga meant taking steps that would lead to God to become one with God. The goal is always bhakti, or to put it in my father’s words, to approach the highest intelligence, namely, God.”

Learning from his father, he says was like going to a foreign country and slowly becoming familiar with its customs. He was taught the texts, how to recite them and how to interpret them. When he wondered whether to accept an invitation to the European Union of Yoga, his father told him to go and attend the conference in Switzerland.
Desikachar would accompany his father and would perform asanas at his behest. He would also teach his students in the presence of his father and would be corrected publicly if he went wrong. “This way of teaching require kindness from the teacher and much modesty and humility on the part of the student.”

There was a 50 year age difference between father and son. One was a traditional teacher and the other a Western educated practitioner. Desikachar says that his father saw that he was different and adapted his teachings for him. “I took that as a great example of what we can do as teachers for others,’ says Desikachar.

The Krishnamacharya Yoga Mandiram was founded in 1976 and Desikachar’s main aim for this was three fold: be a center for healing, offer instruction to anyone wanting to know about yoga and third do research and projects in Yoga.

T Krishnamacharya wrote several works in many languages. In The Heart of Yoga, Desikachar quotes several shlokas from a beautiful selection called Yogajalisaram. There is one that he lived his life by which means:

You may follow karma, jnana or bhakti,
But if yoga is now followed
These paths will lead you nowhere.
This is the wonder of yoga.