Ramayana in Southeast Asia – The Significance of Sundara Kanda 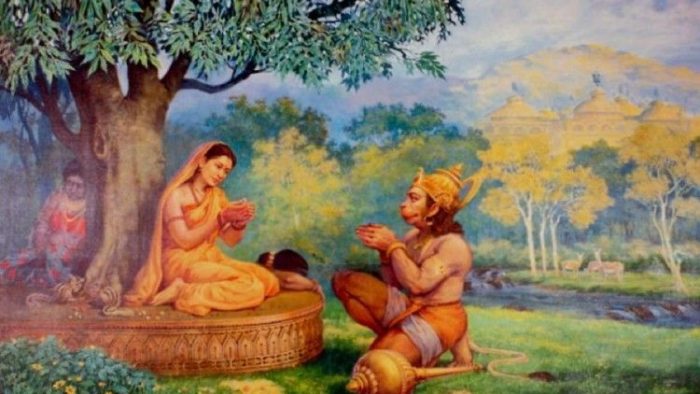 Ramayana in Indian tradition focuses on the elevation of the individual, while the Mahabharata deals with life in the society and the Bhagavata purana elevate the individual soul and thereby the universe. These three texts are like three concentric circles aimed at progress and prosperity of humanity at large.

Ramayana deals with relationships between parents and children between brothers, between wife and husband, guru and sishya and finally between the ruler and his subjects. It teaches us how a human, an animal like a monkey, a demon like Vibhishana can attain divinity.

Ramayana in Sanskrit was authored by Valmiki. There was no literature meant for commoners earlier to Ramayana. Only Vedic literature existed before it. That’s why Valmiki is referred to as the first poet or adi kavi. Two more Ramayanas are very popular the Kamba Ramayanam in the south and Tulasi das’ Rama Charita Maanas in the north.

Ramayana means that which can get the reader to attain Rama. Sitayah Chartam is the story of Sita and Poulastya Vadam is the killing of Ravana.

There are 24 thousand verses in Ramayana and it is divided in to 6 cantos :
Bala kanda dealing with the childhood of Rama and his brothers
Ayodhya kanda deals with their growing up in Ayodhya
Aranya kanda deals with Rama’s exile in to the forests along with Sita and Lakshmana, Sita’s abduction
Kishkindha kanda where Rama meets with Sugreeva and Hanuman
Sundara Kanda the story of searching for Sita and
Yuddha kanda, the war, killing Ravana, Rama’s return to Ayodhya with Sita and Lakshmana and his coronation.
While 5 of the 6 chapters are named around the incidents or places, only Sundara kanda is named differently. It is called Sundara kanda, the beautiful canto.

The significance of Sundara kanda lies in its very naming of the canto by Valmiki. It is a canto that most people chant; it is a paaraayana grantha meant to be chanted. It is named so because various beautiful components embedded in the canto.

Firstly, if we look at it as a work of literature, it consists of beauty or aesthetics in the words employed known in poetics as sabda soundaryam consisting of many figures of speech like alliterations.
Then there are many poetic qualities employed by Valmiki in the meaning of the words with multiple meanings or subtlety, known as artha soundaryam, beauty in meaning.

In Sanskrit literature poetics deals with the concept of Rasa, sentiment or emotion. In Sundara Kanda we find many descriptions expressing density of various emotions of love, anger, fear, repugnance, wonder and so on. This reveals rasa soundaryam.

When Hanuman approaches Sita, she doesn’t believe him as a messenger from Sri Rama. She suspects him to be Ravana in disguise. She asks him to describe the beauty of Rama. When Hanuman sees her for the first time, he was at once amazed at her beauty. We find a great description of the beauty and valour of Hanuman. Thus, Sundara kanda consists of the descriptions of soundaryam of Sri Rama, Sita and Hanuman.

If we look at Sundara kanda as a spiritual text then we find the beauty of the Divine in Sri Rama, beauty of the yearning of the soul in the form of Sita to join the lord and the beauty of Hanuman not just as a messenger but as an Acharya who unfolds the spiritual connotations of the canto to the readers; Paramatma, Jeevatama and Acharya soundaryam.

This there are 9 different aspects of beauty or Soundarya in this canto hence its name Sundara Kanda.

Ramayana consists of 24,000 verses and the most sacred of the mantras, the Gayatri mantra consists of 24 letters. Each cluster of a thousand verses in Ramayana is believed to represent one letter of the Gayatri Mantra. The Sundara kanda represents the twelfth letter ‘va’, there by being the fulcrum of the entire Gayatri Mantra and the centre of Ramayana, though it is in the fifth chapter of the six.

Sundara Kanda is popular as an independent spiritual text often chanted by many devotees and often dealt with in discourses by Gurus.

There are people who read the entire 68 cantos in a day. Many people read it from the first day of the Lunar new year Ugadi to the ninth day Rama Navami, the birth day of Sri Rama. This can be chanted in any manner and chanting it over a period of 40 days, is a common practice.

The result of Sundara Kanda Parayanam is variously described by our ancestors. It is particularly helpful to those who are going through unfavourable planetary positions, financial losses or any other problems. It is more relevant at times like this when the entire world is going through an unprecedented pandemic.

Even one sloka or a letter helps if one has faith says our scriptures.

There are about 300 versions of Ramayana found in the South East Asian nations from Burma to Cambodia, Thailand, Indonesia, Malaysia, Sri Lanka and other nations. There are also various versions of Ramayana in the Buddhist and Jain traditions. In Jainism Rama adheres to nonviolence and therefore it is Lakshmana who kills Ravana. In Thailand it is their national epic and is known as Ramkien and the royal family still follows this tradition though they follow Islam. In Bali several places are named after Ayodhya, Rama, Sita etc. The Indonesian Ramayana dance is one of the most predominant dance drama traditions of the South East Asia. In Cambodia they perform a dance known as Apsara dance which only has Ramayana as its theme.

Some stories depict Sita as Sister of Rama !

Sri Lanka has about thirteen important places of Ramayana included in their tourism map. The Sita Temple in Nuwara Eliya, (Ashoka vanam) where Sita was kept by Ravana are still places of tourist importance. We find the place nearby completely charred and the locals say it was because Hanuman burnt the entire area. There is a myth about Sri Lankans worshipping Ravana. In fact, the Sri Lankans can be divided into two categories, The Simhalese and the Tamilians. Tamilians also are divided as the Sri Lankan Tamils and those who migrated from India. All these worship Rama and not Ravana.