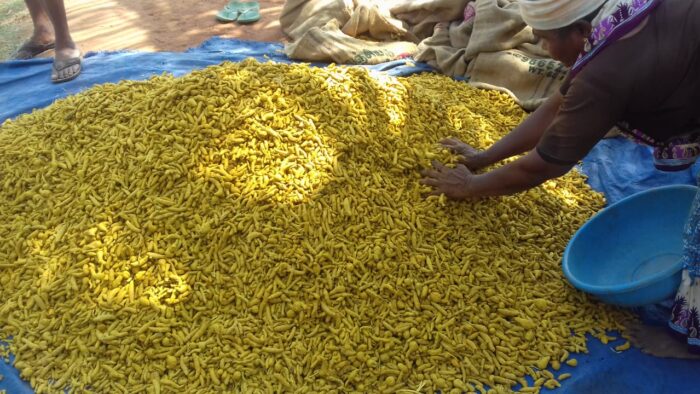 Called by 22 different names, this small wonder stick was the most taken-for-granted produce throughout my growing years.

It used to be a free handout that came along with other products at Indian weddings, religious functions, temple festivals, etc. I strongly believe that tons of turmeric, in its raw form, must have only been circulating and never used for decades!

If we had a wound, sore throat, or a cold, this was a sure-fire Grandmother’s Remedy we were all subject to. It amazes me to see today the healing powers they attribute to this humble turmeric; from immunity building to fighting off cancer. Like many good things in life, it was always there. It just took us a while to realise it!

My own story with this magic product, turmeric, happened by chance. Four years ago, out of a desire to find quietness from a seesaw life, I decided to become a part time organic farmer. A small patch of land acquired a decade ago was lying dormant, so I chose it to begin the journey.

The only thought I had in my mind was that we wouldn’t use any chemical fertilizers. The rest, we decided to learn on the go.

To come from a commercial, fast-paced world of business and move towards a slow-paced agricultural lifestyle had its share of gaffes! The caretaker of the land, a traditional farmer for generations, at many instances, threatened to leave my association if I talked of targets and turnaround time anymore!

After we set up the land in terms of water, electricity, fencing, drip, and caretakers, we thought we were easily on the road to prosperity!

How foolish. Another lesson learnt about life.

I am a strong advocate of acceptance and surrender, and this definitely reaffirmed itself when I worked with nature.

A year went by as we tried short term commercial crops such as corn, onions, and chillies. What a bag of surprises that was! We certainly stumbled multiple times; you name it, I’ve faced it. Out of sheer exhaustion and wanting a break, I chose the divine crop turmeric. An eight month harvest sounded so sweet to my ears.

As always, traditional growers of turmeric dissuaded me from going the organic route. Low productivity, poor pricing, and high cost were their arguments, but I was convinced to go my own way.

My first crop yielded 500 kgs, and from harvest to a powder form, there were many processes to be learnt. I decided to go the last mile too and connect directly with consumers. What a pleasure that turned out to be! Our crop had a high percentage of Curcumin, which determines the quality of the turmeric.

I started announcing this to a small group of family and friends, and what started as a trickle turned into an avalanche; my customers thought I was doing them a favour by supplying them with my turmeric!

The feedback I received was heart warming. From older generations, patients, and medical professionals to home makers; every one of them said that the smell and taste of the turmeric made them think of their youth. Just like their own grandmothers’ remedy!

After three crop cycles, I'm confident of a small profit, and more so, the goodwill. It’s immeasurable.

Today, my world has expanded to include other organic turmeric farmers and I can smell an interesting future for us all. I am finally a turmeric farmer too.

Knowing where I started from, and seeing how far I’ve come, I think that my journey demonstrates the beauty of this divine country that manages to keep connecting us with childhood acquaintances – turmeric! K G Murali has been an entrepreneur for over three decades. For the last 11 years he has dedicated his life to working for HIV-infectedRead more