Nations need to come together for space research: Terry Virts 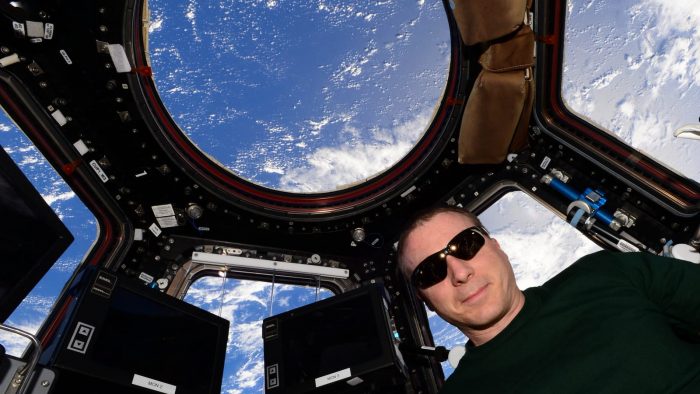 The call from NASA came
on July 20, 2000, the 31st anniversary of the Apollo 11 moon landing. He was at
a meeting at Edwards Air Force Base in southern California, where he was an
F-16 test pilot. Along with 119 other astronaut applicants, he had been waiting
anxiously for months to hear the space agency’s final decision where 17 candidates
would be picked for the latest class of astronauts.

“The phone rang. NASA’s chief
astronaut wanted to know if I was still interested in coming to Houston. I knew
what that meant, of course, and I wanted to shout out loud. Instead, being a
steely-eyed fighter pilot, I simply replied, “Yes sir, I’m still interested.”

Terry had dreamed of becoming an astronaut ever since kindergarten, when he read his first book about the Apollo missions. “I grew up wanting to be a pilot after reading a book about Apollo in kindergarten.  I remember my dad got me a ride in a red biplane at the county fair.  I loved it but was terrified that he would fly upside down and I’d fall out,” Terry tells CSP in an interview.

A motivational speaker, Terry tells youngsters to
never accept a NO. “I tell them ‘don’t tell yourself no’.  I was always told becoming an astronaut was a
crazy Dream but I went ahead and tried anyway, not listening to my
friends.   And it paid off, it’s really
important that you pursue your dream and do not take yourself out of it.”

Terry is often asked what it takes to be an astronaut. Even after 16 years as an astronaut, he says it’s a question with no easy answer.  “The ability to stay calm under pressure in a fast-paced environment is critical, not just to succeed in space but also to make it through NASA’s training program."

“Astronaut candidates
get all sorts of instruction, but aviation training, mostly in the venerable
T-38 supersonic jet, is by far the most important. That’s because the stakes
are so high. It’s one thing to screw up in a ground-based simulator, quite
another to do so in a T-38 flying at 40,000 feet. Make a mistake while flying
at 500 miles an hour, and your ability to remain alive will be sorely
compromised. But as someone who spent more than seven months in space, with a
variety of crewmates, I can say that the most important skill for space fliers
is the ability to get along with others. Especially on long-duration missions,
it’s essential to be flexible and to have key “soft skills,” like being able to
communicate effectively when problems arise and knowing not to sweat the small
stuff.”

As a pilot and astronaut keeping fit is really important for Terry. “I do a mix of weightlifting and running, it was also important in space to keep your bones and muscles from atrophying from the weightlessness.  I do the same here on earth, but not often enough, I get so busy that it is hard to find time to exercise but it is really important to do so.”

Terry is what people call a multi-potentialite, a person
of multiple skills. Idea synthesis, rapid learning and adaptability are the
three skills that multi-potentialites are very adept at and Terry has it in
ample measure. “For me I think the key was being interested in different things.
I did not just study one subject. I majored in math but minored in French and
love traveling around the world. I love foreign affairs and economics, in
addition to all the technical subjects. I think if somebody really wants to be
a great problem solver and make an impact they have to have a broad range of
interests.”

In space, the varied nature of the job excited Terry. “No two days are the same. At different times during my stints in space, I was a mechanic and a pilot and a scientist and a spacewalker and Hollywood producer and a crew doctor and dentist. I was even a hairdresser for my Italian crewmate Samantha Cristoforetti, which was by far the scariest thing I did in space.”

While in space Colonel Virts captured more than 300,000 still images, more than on any other space mission. He also performed an integral role by filming and appearing in the IMAX film “A Beautiful Planet,” narrated by Jennifer Lawrence. He has photographed India from above. Speaking about the difference the eye of an artist brings to pictures, Terry says, “there are lots of automated video cameras on the space station and another set of lights, and the imagery is great, but they always seem like automated camera imagery. When a human takes a picture they have to use their creativity to get the composition and lighting and subject matter, and I think that those artistic elements come through in photography as much as they do in other art forms.”

Terry spent 200 consecutive days in space, proving that man can live and work in space over extended periods of time. He has written about his vision of putting man on the Red planet Mars. “In the 1960s it was to put a man on the moon. Now it should be to send humans to Mars and back beginning in the 2030s, with increasingly long-duration missions to the planet’s surface. This vision is clear, and it goes beyond mere “boot prints and flags.” Long-term goals should be to understand the environmental, geological, and biological history of Mars, but also to set the stage for human settlements on the red planet.”

“My philosophy is that I will not take a risk if it is not worth it, I drive like a grandma. But I will fly F-16s over Iraq or launch on rockets if I think there is a worthy reason to do so. It’s important to understand what the risk is upfront and then except it, don’t let it surprise you or come out of the blue.

He is very clear that a
Mars mission should be a multi-national endeavour. “Astronauts from many
countries working aboard the ISS have demonstrated a level of cooperation that
is often missing down here on Earth; I recently commanded the ISS during the
height of U.S.-Russian tensions, and I am proud of how well my international
crew of astronauts and cosmonauts worked together.”

In July this year, Terry circumnavigated the poles
setting a record in honour of Apollo. “We wanted to set this record in honour
of Apollo, to do something that was adventurous and show that we can still do
great things, and I had the honour of directing a film about this attempt.  In fact I am finishing editing at this week
and then we are going to start marketing it. But the goal of the film is really
to show the international cooperation that our crew had, we had over 30
different nations represented. We got to see the North Pole region and also
talk about the environment, so I talk quite a bit about carbon management and
climate change in the film.”

Living a life on the edge, Terry risk management is
an important subject. “My philosophy is that I will not take a risk if it is
not worth it, I drive like a grandma. But I will fly F-16s over Iraq or launch
on rockets if I think there is a worthy reason to do so. It’s important to
understand what the risk is upfront and then except it, don’t let it surprise
you or come out of the blue.”

Now retired, Terry’s new mission is to impact people
through speaking, writing, and TV/ movies. “The world has become so fractured,
and without sounding overly dramatic I believe that democracy is at risk.  It’s been failing around the world, with the
US leading the way.  So I hope to inspire
people to see that it’s better to work together.  It feels like 1928 and I don’t want 1940 to
happen.”

Commenting on India’s space missions, Terry says “I
think it is very exciting the countries like India are exploring space. It’s
exciting that more nations and private sector are becoming engaged and space
exploration. It’s just important that we use space peacefully, there have been
some recent satellite explosions, anti-satellite military tests that have the
potential to really ruin our access to space. Just imagine a world without GPS,
and that’s not a fantasy it’s a very real possibility if we continue to blow up
satellites in orbit,” warns the spaceman.