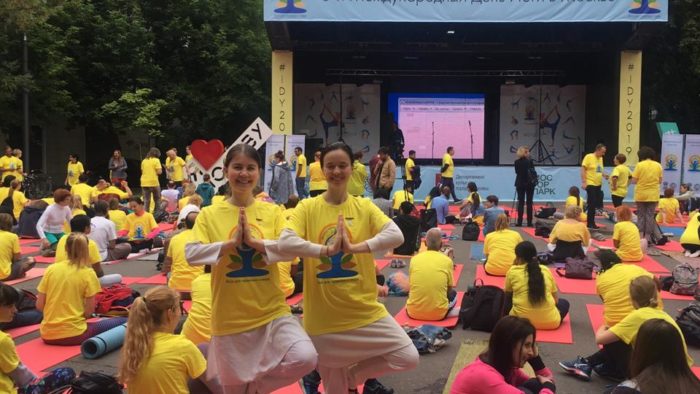 Russia’s connection to Vedic India has been long researched, with many commonalities between Slavic traditions, culture and philosophies and Indic ones. The research has been done largely by Westerners, says Sanskrit researcher Zahorulko Andriy, who wishes to translate texts from Sanskrit to Russian directly and not from English, where much is lost in translation. There are many parallel traditions, observes Usha RK, even in our social mores. Take for example the marriage ceremonies practiced in both South and North India. “There is a lot of similarity in our marriage rituals. I saw a parallel between the ceremony where the bride and bridegroom play games, called Nalangu in Tamil Nadu and similar games in Russia, where they take the bride away and they expect the bridegroom to search for her. This is similar to how we take the bridegroom to ‘Kashi’ and the bride's side have to bring him back. There are few things that I found which are very intrinsic to both our cultures,” she says.

India has had a great strategic partnership with the former Soviet Union and continues to have good will with Russia and other states in the region. Dr Usha says believes that modern historical geopolitical bonhomie could not have existed without some cultural affinity. As an accomplished artist herself (she is a Bharatanatyam dancer), she says “I believe that no two people or groups can partner with each other unless there is a soft approach to the relationship. The geopolitical, hardcore industrial friendship would not have come about, without shared values.”

While Covid has put paid to any travel, Russians have travelled extensively to India to paint her beautiful landscape. Dr Usha says many Russians like to travel to India to paint and the Center in Moscow has showcased several exhibitions of artistes who have visited Kerala, Karnataka, Jodhpur, Jaipur, Brindavan, Mathura and more. “We have seen girls visiting Delhi to paint artistes and come here and exhibited their work. I think there's a lot of interest for heritage and to actually understand what India is about. They are more interested in going to centers or places where there is a lot of history, culture or tradition.” Indian Art Fair, Delhi, will be showcasing the work of Russian painter Nicholas Roerich who “came to call the Himalayas his home, drawing inspiration from the expansive mountain range to create works that capture breath-taking scale in vibrant colour” in February 2021. The IAF website says Roerich met his wife Helena Shaposhnikova in 1899 instrumental in awakening a deep and sincere interest for Eastern religions and philosophy in Roerich.

“In 1923, accompanied by his wife and two sons (one of whom would marry Indian actress Devika Rani), Nicholas Roerich set out on his first Trans-Himalayan expedition, drawn by a magnetic appeal that he had felt since his early years. Together, they embarked on a journey of exploration that would take them into Tibet, Mongolia, Chinese Turkestan, and Altai, eventually settling in the quaint hill town of Naggar in northern India. Over 500 brilliant paintings resulted from the trek, most notably of the great Kanchenjunga, reflecting Roerich’s growing appetite for mountains and the beauty of nature.

During the expedition, Roerich was also drawn to Himalayan religions, archaeological sites, cultures and languages, which led to the establishment of the Urusvati Himalayan Research Institute in 1928. The pursuit of knowledge and beauty became sacred to Roerich and, in years to follow, the Institute’s library and collection of ancient relics and folklore, local flora and fauna grew. The period was also the most artistically productive of Roerich’s life, and he wrote and painted abundantly – the Himalaya’s splendid mountains proving a constant source of inspiration.” (https://indiaartfair.in/artist-nicholas-roerich-a-guide) Dr Usha says that Russian artists continue to be drawn to the classical arts whether it is music, dance or painting and this is their main attraction to India. Diplomats to Russia, including ambassadors have been cultural giants including Vijayalakshmi Pandit, Sarvepalli Radhakrishnan and Shivshankar Menon who set the stage for the many Festivals of India to be celebrated in Moscow.

The audiences for most cultural programmes are Russian, unlike in the West where they tend to be the Indian diaspora, she says. And they perform at the great venues of Russia. “MS Subbulakshmi and Pandit Ravishankar have performed at the Bolshoi Ballet Theatre. Apart from Bolshoi, there are many other beautiful auditoriums including at the Tchaikovsky Center here, where Ustad Amjad Ali Khan performed just a couple of years back. Right now we have tie up with the Government which is called Namaste Russia.”

Indian cinema, has always appealed to Russian sensibilities. Green eyed, Slavic looking Raj Kapoor in Avara was a particular favourite, but Mithun Chakraborty came a close second, says Dr Usha. She quotes an interview with the great Khwaja Ahmad Abbas, popularly known as K. A. Abbas, Indian film director, screenwriter, novelist, and a journalist, who was upset for not receiving a hero’s welcome in Russia. But when his film was released and he went to the theatre, there were thousands of people waiting outside and they literally lifted him up and that is when he realised that the people of Russia really loved him. Yoga and Ayurveda are very popular in Russia and with them has risen an interest in Sanskrit. Zahorulko Andriy is a Ph.D student of Central Sanskrit University Rashtriya Sanskrit Sansthan, New Delhi working on the “Comparative study and general analysis of the case systems of the Sanskrit and the Russian languages” - (संस्कृतस्य रूस्-भाषायाश्च विभक्तीनां तौलनिकमध्ययनं सामान्यविश्लेषणञ्च), which will be fully in Sanskrit.

His parents came to India, like many Russian translators to help Russian engineers and technicians in military establishments all over India, which were inducting Russian aircrafts and ships. His father worked as a translator in steel plants at Vishakapatanam and Durgapur before working for five years with Brahmos, the Indo-Russian joint venture for surface to cruise missiles. His mother was a Russian lecturer at Delhi University.

Andriy has been in India for over 12 years now, and his parents are now retired and living in Tiruvanamallai in Tamil Nadu. “My parents got interested in Indian philosophy and culture, long, long time ago, many years before my birth. They came to India as tourists as they had read works about Yoga, philosophy, and the works of famous Indian scholars and spiritual leaders like Swami Vivekananda,” says Andrei.

His parents, both linguists, have translated many books about Hindu culture and philosophy from English to Russian. While many popular articles talk about similar words in Russian and Sanskrit, Andrei is more rigorous and scientific in his approach.

He says “The vocabulary of most of languages is quite vast with thousands of words. So even the languages from absolutely different families could have 50, 100 to 700 words similar words, sounding the same, having the same meaning without meaning anything special. In the case of Russian and Sanskrit we are talking about languages from one Indo-European family so of course, there will be some similarities.”

Referring to popular articles which celebrate the similarities, Andrei says that many of them don’t compare the rules of grammar where deeper comparisons show. “For me it's quite more important to compare the morphological systems of languages and to compare their grammatical structure. For example, how many cases do we have in Sanskrit as compared to Russian, and how they are used in the two languages?”

Grammar is the key to learning a language, says Andriy, quoting a Sanskrit verse which says that even if one is not clever to learn a lot of things in life, one must at least learn Grammar, because if you learn grammar, you won’t miss much. In his study so far, he says that while there are many similarities between Russian and Sanskrit, it is not the most similar among the Slavic languages.

He says that there is a huge interest for spiritual texts including the Vedas, texts about Vedic culture and philosophy and Yoga. “Many of these books have been translated several hundreds of years ago probably not directly from Sanskrit into Russian but from English, German, French, etc.”

Andriy says the Abhijñānaśākuntalam the famous work of Kalidasa was translated more than 100 years ago and so people were familiar with Sanskrit culture and drama. There are only a few like him however, who are interested in the language itself, its Grammar. “I am mostly interested in Grammar – Vyakaranam. So I'm interested in works like Vaiyakarana Siddhanta Kaumudi Mahabhashyam – the famous work of Maharishi Patanjali, Vaiyakarana Bhushana Saras. This is specific literature which is not very popular among foreigners. Big important parts of them have been translated, but none of these works have been fully translated into Russian.”

Andriy says these works are not popular among common people in Russia. “If you ask people about Yoga, Ayurveda or Mahabharata or Ramayana they would have atleast heard about them. But if you talk about Vyakarana Siddhanta Kaumudi Mahabashyam or even Ashtadhyayi, or even Panini not many people know much about all this.”

He says when he started his PhD, out of the 157 students at the Rashtriya Sanskrit Sansthan, he was the only foreigner. Now there is another student from Germany. As to teaching Sanskrit in Russia, Andriy says not knowing Russian is not much of a hurdle nowadays. “There are two sides to this. I see many great Sanskrit pandits who do not know not only Russian but also English. On the other hand some great scholars and professors in Sanskrit are not well versed in classical Sanskrit. For example some Sanskrit scholars from the West are different, as their works are written from their point of which is not Classical Sanskrit.”

Some changes need to brought about to offer Sanskrit to more foreigners, says Andriy. The JNCC could help with student exchanges where Russian Sanskrit students could visit India for a few weeks or months to learn from Pundits. Also he says some efforts have to be made here in India to teach Sanskrit pundits foreign languages - English, German, maybe Russian.

Unlike for many, Sanskrit for Andriy is a living, breathing language, one which gives him great joy. “When I meet my classmates, we always converse in Sanskrit and it doesn’t mean we always talk about the Vedas or philosophy. We talk about our everyday life and we know for a fact that Sanskrit is living language.”