Lakshmi Mohanbabu’s Mandala to Find Permanent Place on the Moon 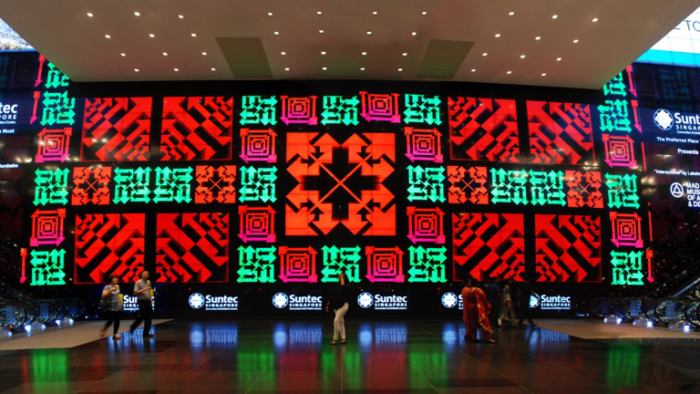 Her art is part of a project by the European Space Agency (ESA), the Moon Gallery to be launched in 2022, where 100 pieces of art will be a permanent exhibition on the surface of the moon. The selected artwork had to fit into a space of a centimetre cube and have a message that was worthy of being sent to the moon. The moon gallery has ongoing exhibitions held in different cities till the moon launch in 2022 (https://www.lakshmimohanbabu.com/moon-cube.html).

Her approach to art has been to translate her ideas into all facets of design and spans a multitude of disciplines - that which may be viewed, is wearable, liveable and usable such as painting, clothing, jewellery, living spaces, sculpture, furniture, crockery etc. to make art a truly immersive experience.

Lakshmi is a Singaporean Artist, Jewellery designer, Architect and a Fashion designer (from The National Institute of Fashion Technology, New Delhi), who grew up in Kabul, Afghanistan. She started  her career as an Architect, moved on to illustrate books for the Voluntary Health Association of India and the WHO in the area of disability, became a Fashion designer, Educator/Mentor at NIFT, Delhi and Lasalle College of the Arts and now devotes her time to being an artist of many mediums. An unplanned journey - an upbringing in the UN International community in war-torn Afghanistan, becoming an Architect, Artist, Fashion and Jewellery designer has been Lakshmi’s path into the world of design.

A psychological immersion into the realms of memories, culture, community, personal and relative histories, her work explores the intersection of Art, Science and Philosophy, the precept that “every creation or invention is built on existing concepts and discoveries made through the ages. It is the overlay of the new on the foundations of the old, the dichotomy of the dependence and independence of an idea, thought or creation. It reflects the evolution of the myriad influences that interact with our sensory spectrum of sight, smell, sound, feeling and thought.”

“Mathematicians have grappled with shapes spending years to find ways and means to draw them, calculate their areas and volumes; connect these patterns to those seen in nature and use their discoveries in numerous fields benefiting the artist in turn. Examples of this would be Newton and Leibniz’s simultaneously development of a whole new branch of mathematics dealing with change, unaware of the fact that Indian mathematician Bhaskaracharya’s findings predated theirs by five centuries. Without all this knowledge and their dependence on discoveries made before and after them by numerous scientists, philosophers and artists, none of the design, communication systems and technology that we see today would exist. This also is a historic model of synchronicity of thought where there is a relative similarity and style in the creations of inventors and designers at any given point in time as they have been presented with similar knowledge and learning,” says Lakshmi.

As an artist Lakshmi creates with what feels intuitive, but with an acute awareness and due respect to the knowledge of it being rooted in what she has learnt and imbibed from her own experiences of interactions, travel and reading. Her emphasis is on cross cultural influences that break down barriers of communication, that brings art to life, that one can move in and around, can be understood and interacted with. Just as the writer gathers information from many sources, organizes and edits before presenting it in a distinctive voice, her art finds context in the present, and is a non-literal and unexpected interpretation of ideas and philosophies. This stems from the integration of research-based layers of visual information used effectively to communicate a message. It may take time to unravel its levels of hidden secrets and metaphors which aim to stir curiosity and to make the discovery all the more gratifying for the viewer once revealed.

In this interview she talks about the selection of her art on a mandala to be exhibited permanently on the moon in 2022.

What inspired you to choose a mandala?

The Cube of Interaction is based on my Interactions series of paintings a global language, an immersion and interpretation of the multitudinous unique codes of the Universe and the symbols created by mankind that have parallels and common ground across cultures and beliefs in different parts of the world.

I see myself as a global citizen and my rather unusual upbringing in Afghanistan in the UN community helped me to see the obvious and not so obvious similarities between people from all parts of the world, be it in mythology, symbolism, language, science, numbers and philosophy. The Mandala best embodies these ideas and is representational of the interconnected world of today. It transcends barriers created by geographical, racial and cultural divides. It may be seen in the form of the Buddhist Mandala, the Hindu Shri Yantra, the domes of mosques, the Taoist Ying and Yang, Christian Rose windows, American Teepees and African Adinkra symbols to name a few. The color wheel may be viewed as a scientific Mandala that shows the interaction  of colors. It therefore resonates with people from all walks of life, the belief systems of every individual from the deeply religious to the agnostic. The Mandala represents the idea that each individual is connected to one’s immediate surroundings that expands on to the universe. Its form is reflected in our interaction with friends, families, communities and in the shapes of the planets, the moon and their trajectories. All these elements are encompassed in the moon Interaction cube, a symbol based on the Mandala that depicts the singularity of the self; the duality of complementary sides; the trinity of creation, preservation and destruction; the quaternity of the four directions to the plurality in our belief systems.

Implicit in its form is the blossoming flower, the creation of something new. The arrows depict direction and movement, and the interdependence, interrelationship and interconnected nature of our Interactions. These are the building blocks for a collaborative effort for the creation of a habitat and a Mission to the moon. How can non-Indians interpret this work?

Art cannot be expected to always speak for itself without explanation, much like viewing a beautiful book cover and making an assumption about its contents. Its value lies in the artist’s expression and thoughts in the making of it. To get rid of any ambiguity I use every medium available to make explicit with explanatory animations, videos and written material, her thoughts and interpretations. The intent is to draw viewers to understand a point of view and take away with them their own interpretation, as with all belief systems.

As a representation of racial harmony and interaction, the basic building blocks of shapes such as Triangles, Squares, Circles and Spirals that are used as symbols in Science, Art and Religion are used in conjunction with number systems - singularity, duality, trinity, quaternity and plurality that tie scientific and philosophical concepts of shape, structure, movement, light, sound, energy and thought (https://www.youtube.com/watch?v=foBWDjwcVks).

The Interactions paintings use the concentric shape of the Shri Yantra mandala, its basic polygons and rotational geometry. Each painting is created using a single continuous line that starts and ends at the same point representing continuing life cycles and infinity, dividing it into two sides, the positive existent space that defines the bounds of the negative non-existent space. This is a non-literal interpretation of the underlying philosophy of the ying and yang which is based on the complimentary interdependence of the male and female seen as a wave separating two halves. The principle behind it is that a wave is created only if there is a crest and a corresponding trough, the creation of one being dependent on the other. The wave is the transport pattern for all forms of energy, light and sound.

The colour wheel has been used to subdivide the painting series into groups of three, with each group following the same pattern and movement principles. These are the triads of the primary, secondary and the two tertiary groups.

Many philosophies use the concept of the male and female, the duality of the complementary nature of existence and non-existence. This may be seen in fertility or creation symbols such as the Yoni-Lingam and the Ying- Yang that depict the origin of the universe, its creation and regeneration.

The arrow a masculine principle: The upward pointing triangle is a phallic symbol. Triangular headed Arrows are solar symbols that depict the sun’s rays and direction. A flight of arrows signifies the movement of time and an ascent to the celestial. The paintings use arrows to depict direction and movement.

The flower a feminine principle: The Inverted Triangle is a feminine lunar symbol.  The paintings use rotational geometry to convey the floral form of the Lotus or Rose, a symbol of creation, new life and beginnings.

(Lakshmi Mohanbabu will be speaking at Namaste 2020 on September 6th: https://www.softpowermag.com/event/indias-global-connect/)