Intrinsic Soft Power Manifest in the Art and Culture of India 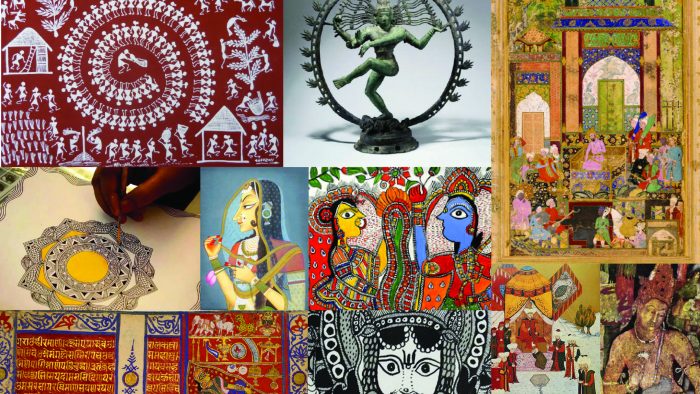 Though art and culture may outwardly seem to be independent, they are intimately interlinked and always go hand in hand. Common elements like cuisine, ornaments, dress, language, behaviour, music, dance, literature etc underlie the customs of every culture, each having its own uniqueness.Culture is reflective of the ethos of a particular society and determines its character.

Art is a product of culture, a defined creative approach to interpreting ideas, drawing images on canvas or in space, and creating concepts. It is a creative expression of deep thoughts and situations that trigger transcendent experiences presented orally, visually or interactively.Art can re-enchant the way humanity sees the world, especially in times of challenges and struggles. For instance, it can rekindle a sense of patriotism, stir people into right action, uplift their spirit and aspirations.

This intrinsic power of art and culture has a universal value that infuses all relations and relationships both at national and international level. When districts in states, states in a country, and countries in the globe come together, art and culture provide a vital fabric of expression and cooperation. It provides a beautiful medium to educate and enlighten the significance of the cultural ethics and ethos of different regions.

Cultural linkages develop mutual respect and honour in international relations and a certain peace and joy in human relations. Beyond theboundaries and differences, theypromote a common ground to unite. For instance, India and Russia recently celebrated the 70th anniversary of their diplomatic relations with the President of Russia, Vladimir Putin blogging a special message in the Times of India on May 30, 2017 and Prime Minister Narendra Modi visiting Russia to mark the historic occasion.[i]

Influence of Indian culture on Russia predates economic and trade relations between India and the then USSR, to the 15th century, when AfanasiyNikitin, a merchant from the land of Tver in Russia, in his three-year stay (CE 1466 – CE 1472), documented every aspect of the Indian society in his book, A Journey Beyond the Three Seas.[ii] Since then, cultural exchanges between the two countries have followed a consistent trajectory. Nikitin’s book became a major motion picture in Russia in CE 1950, with the Russian actor Oleg Strizhenov playing Nikitin and co-featuring the Hindi actress, Nargis Dutt.[iii] In my international travels, I am yet to meet a Russian who has not hummed “Awara hoo” or “MerajoothahaiJapani...sar pe laal topirussi…” with such pride to display his love of Indian culture.

The setting up of the Mayuri Dance Company in the Russian Republic of Karelia stands as a testament to this influence. Vera Evgrafova, who has always had a love of Indian dance was deeply moved by the 1985 movie “Mayuri”, which featured the story of an Indian Bharatanatyam dancer named Sudha Chandran. With aspirations of being a Bharatanatyam dancer, Sudha Chandran begins her training in the dance as a young girl, but as a teenager, loses a leg in a car accident.  Sudha fights her struggles to regain her dignity and identity as a dancer.  Vera Evgrafova, was so inspired by this feature film, that she appropriated the name of the character (Mayuri) for her dance group that she formed with dancers who shared the love for Indian dances in 1987 Railway Workers Cultural Center in Petrozavodsk, the capital of the Republic of Karelia. Winning the “Narodiny” award in 1995 by the Karelian Ministry of Culture, Vera secured a spot at the state-wide level.[iv]

There are many such inspiring stories of countries coming together for peace and cooperation where culture has been a major factor promoting the respective national interest and contributing to a more peaceful world order.

International Recognition to Indian Cities for its Art and Culture

Three cities in India - Chennai,Varanasi and Jaipur - have joined the prestigious UNESCO Creative Cities Network for its rich music and cultural tradition. This world organization has identified culture and creativity as integral and strategic factors for development at the local level and strengthen mutual respect and cooperation at the international level.

During the December - January “Margazhi” month of the Tamil Calendar, Chennai celebrates its rich Carnatic music and classical dance,predominantly Bharatanatyam, attracting host of artistes and art lovers from all over the globe. It is a beautiful coincidence that it is held in the Tamil month of Margazhi - a month traditionally dedicated to religious activities and spiritual disciplines. People wake up early morning, sing hymns and devotional songs on the deities, participate in processions and cook delicious delicacies!“Among the 12 months, I am Margazhi,” says Lord Krishna in the Bhagavad Gita (verse 35, chapter 10).

For many in Chennai, “December season” as it has come to be known as, is like a pilgrimage. Around 3000 programs and performances take place in established and upcoming Sabhasor organisationsat over 300 venues in Chennai. Every Sabha reverberates with melody and rhythm in praise of the divine, through the composition of saints, sages and many great composers. In recent times, temples and ancient traditional houses also serve as venues for lectures, demonstrations and concerts.

I am a proud and happy Chennaite. Being a performer and a participant of this grand Dance-Music season, I have been enjoying this wondrous festival for decades now.The festival was launched  in 1927 as an adjunct to INC, and has now completed 92 glorious years!The schedule of at least the top 10 Sabhas, are published in The Hindu on December 1st supplement. There are apps now that track the schedule of sabhasandkutcheris(concerts) like MargazhiSangeetam, SaRiGaMa, Zeek and collection of favorite songs from Twang. Online websites like KutcheriBuzz are a great source of the season schedule too!

Performers save their best repertoire to showcase for the season, and the audience - their best ethnic attires! The ladies already plan a display of collection of their Kanchipuram silk sarees and jasmine flowers. The men join the show with their shawls,  Kurtas and veshtis!Margazhi is to Chennai as Ganges is to Varanasi. Perhaps no other city in the world has such a kind of festival.

“Varanasi was advocated as an ideal example of India's intangible Cultural heritage as a combination of a temple city with its rich tradition in music. The Varanasi school of music or the Benaras gharana named after the city along with the semi classical genres like Hori, Chaiti, Tappa, Daadra are rich in musical heritage.The ghats, havelis and temples have housed the Benaras gharana and nurtured it backed with the Banaras Hindu University with its Music and Dance departments.The Government of Rajasthan nominated the Jaipur City under the Creative CitiesNetwork for its art & craft. 36 varieties of crafts were identified including the ones related to sculpture, pottery, textiles and jewellery making. Right from King Sawai Jai Singh II of Jaipur in 18th Century to his successors, the city has been nurtured as a centre of artistic excellence.”[v]As designated  members of UCCN (UNESCO’s Creative Cities Network), they reflect a hub for creativity and integrate culture into sustainable development plans.

Significance of Art and Culture in India

Indian culture is spiritual. It elevates and celebrates mankind, uplifts one to assimilate the four fundamental pursuits of mankind –(i) Dharma (righteous actions), (ii) Artha (securities like wealth, family, power and position), (iii) Kama (sensory, intellectual or emotional pleasures), and (iv) Moksha (enlightenment - gaining freedom from all limitations and sorrow). None of these pursuits are simple, because even though universal, the variety of human choices and the multiple layers of psychological complexities involved, give them a range of interpretations, perceptions and decisions.

The Vedic culture of India unfolds a universal vision that brings harmony in all these pursuits of mankind,with the environment. This harmony is easily attainable with the understanding that when the means or process of accomplishment of any pursuit is undertaken with commitment to right and ethical ways, harmony and fulfillment can be well orchestrated.

Art and Culture of India is Immortal

Do the expression of culture nurture and address all the needs of individuals? If they do not, that culture will not stand the test of time and would be outdated. The Puranas, Itihasaas, temple architecture, the folk lore, food, language, music, dance all seem to have an intrinsic strength to sustain, modify and adapt to the changing times without comprising on its integrity.Vedic culture seems to be relevant to all ages and at all times. Hence,in spite of many years of oppression, the culture today is still alive and celebrated!

For economic growth, technological, medical, industrial, and academic advancement is necessary but it cannot be used as a measure for inner growth or emotional maturity of a person.The struggling human heart always seeks fulfillment, wholeness, to be free from conflicts and pain. Vedic vision helps the individual resolve this fundamental struggle. Art and culture of India facilitates this resolution.