Indian authors should know that powerful storytelling is already in their cultural DNA: Alfredo Covelli 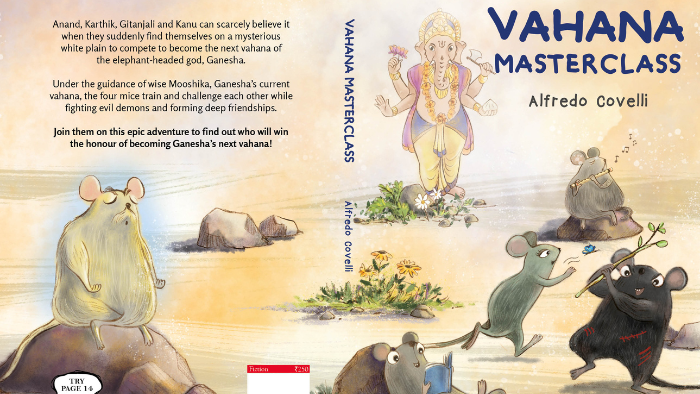 As a child, screenwriter and author, Alfredo Covelli was drawn to India and always had a strong connection to India whilst reading books on India and watching Indian films. He began visiting Kolkata as a teenager, working in orphanages and getting familiar with the city and with the Bengali culture. Creating a deep connection with Indian kids made him understand their way of thinking, their way of dreaming, the actors, the myths and the stories they loved. “It started from Kolkata and its children, and somehow I'm still trapped in my teen years, since I write for Indian children and my book starts in Kolkata,” expressed Alfredo.

Alfredo Covelli published Vahana Mushika, a children’s novel that revolves around Lord Ganesha’s vahana (vehicle), the Mushika (mouse). Indica Soft Power was delighted to be in conversation with Alfredo and learn about his thought process behind the book and his journey with India.

“I wanted to talk to Indian children about Vahana Mushika. Mushika is often pictured in Indian cartoons and animated TV series as a funny and clumsy mouse. However, I wanted to explore the nature of the Vahana, and be serious about this, with children,” explained Alfredo.

He set the premise around the old Vahana Mushika deciding to retire, after millennials of absolute service and devotion, and in order to replace him, four little mice are selected in different parts of India: Intelligent Anand from Kolkata (selected by Kali), Devoted Kanu from Gujarat (selected by Krishna), Compassionate Gitanjali from Uttarakhand (selected by all the trees of the world) and Strong Khartik from Chennai (selected by all the other Vahanas). He imagined that these mice should be trained by the old Vahana, in a sort of academy. They would then face demons and terrible dangers to prove their new skills, and in the end, only one of the lot would be declared the next Vahana of Lord Ganesha. We asked him why he chose Ganesha. His response was that he did not choose Ganesha. He chose Vahana Mushika and felt the need to explore the nature of the Vahana, a sacred creature who is the epitome of strength and devotion. The Vahana is an instrument of God, with a dual purpose: they are the servants of God and his kindred spirit; They are the only one who are constantly in a physical and spiritual contact with the divinity, in a perfect symbiosis.

Publishing the book took a while. “It took a couple of years to find a publishing company. I did not know anything about the Indian publishing industry, so I started making unsolicited submissions, and a couple of important ones replied, expressing interest, but did not take the book to the next stage. Then, a combination of people and events brought me to Scholastic India, where publisher Shantanu Duttagupta strongly embraced and supported the book. Then, owing to the pandemic, the publishing process was delayed by a year,” he explained.

We asked him why it was important for such a book to be released. “I really don't know if my book is important, or deserves to be published. Maybe it is important for some children who can connect with it. I've tried to put, in this book, all my faith, all my love and some writing skills. I feel that publishing a book in beloved India, talking about the traditional stories to Indian kids, using a connection I have established long ago is the greatest privilege for me. Actually, the publication of this book is important for me,” he delineated.

Having been in contact with India for a long time, we wondered about the collaborations that Alfredo had worked on with artists and authors for his various projects. As a film producer, screenwriter and teacher, Alfredo told us that he has been collaborating with many artists every day of his life.

“The illustrations of Vahana Masterclass are made by Indian artist Zainab Tambawalla; she enriched the text in a very positive way. I would like to write something new, maybe collaborating with my valiant friend and talented artist Samidha Gunjal. Let's see what the future brings,” he expressed.

Primarily, Alfredo is a screenwriter and has worked with the Italian film industry. When asked if he has worked with Indian cinema or theatre, he said “I have been script consulting young Indian writers/directors back in 2016, for the NFDC Film Bazaar. That's my only experience with Indian authors. When I was 19, I visited the Satyajit Ray Film Institute in Kolkata, because I wanted to study there, but then I came back to Rome and I immediately started working in Italian films as an assistant director, abandoning the idea of attending a film school. Now I teach screenwriting in the Italian National Film School, but to tell you the truth, the more I grow old and experienced, the more I'd like to teach in India.” Indian cinema has found a place in the hearts of global audiences. It is either the story or the music or the fashion or the bright sets that enthral the audience. As someone who has extensively worked with films and has caught a glimpse of the Indian film industry, we asked Alfredo if there are any untapped areas or concepts that Indian cinema scripts can work on.

“I believe India always had and still has a large diversity of films, from pure entertainment to great arthouse. Some consultants from abroad often push the Indian author in using the western idea of development and approach to the stories. Indian authors should know that powerful storytelling is already in their cultural DNA, and if they are talented, they can reach any goal, trusting their own cultural skills. Indian kids are fed with great epics since they are born.

The main difference between my Italian students and young Indian screenwriters is on the approach to the story's creation: western culture often pushes the author to start with the psychology of the character, with its drive, goals and traumas from the past, and most of the time, Indians simply can't relate to this, because Sigmund Freud is not part of their culture. Indians often start their creations from the concept and the actions, so walking and trusting that different path, they can easily reach the same psychological results,” he explained.

He added that the only things that Indian young screenwriters could consider a bit more, are the clear transformation of the character and his linear progression, which are typical western individualistic elements. In fact, even if kids are fed with great cultural adventures, with marvellous heroes and incredible actions, in those epics, almost nobody becomes a God or a hero: a God is a God, and a hero is a hero, from the beginning to the end. They should keep this in mind, because these two elements, that don't inhabit the cultural DNA of the young Indian writer, usually hook the emotion of the audience, both in commercial and arthouse films.

We asked Alfredo to share pictures from his time in India. There was a refreshing response from him: In India I usually don't take pictures, I just draw images in my diary, to remember things my way. The photographs in the article are his illustrations.