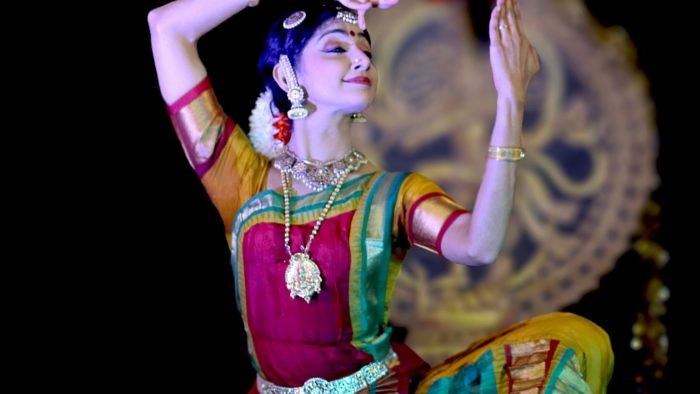 Music, dance and gestures are as old as humanity. Man communicated only through gestures until languages evolved over many centuries. Dance is the earliest language of humanity. Even now, we still use gestures while speaking to emphasise what we say in words. India is a land of one of the most ancient cultures and civilizations in the world. While its diversity may baffle people across the world, its unity is held by a strong undercurrent of shared traditions and values. Though there are about 1600 languages, people proudly sing one National Anthem, enjoy the oneness of many of their varied cultures held together by their treatises.

One such great treatise which keeps the Indian Classical Dances as a bunch of many colourful flowers together, is Nāțya Śāstra, a text on dramaturgy written around 2 C BC by Bharata. It is the world’s earliest available treatise on the subject. This text governs all forms of dance practised in India, whether it is Kathak dance in the north or Kūchipudi in the south, Manipuri in the north east or Mohiniāțțm in the south west of India. The manuscripts of Nāțya Śāstra were first found around 1826. Nāțya Śāstra is a kind of an encyclopaedia covering not just drama and dance, but it covered a gamut of many aspects like poetics, prosody, music, architecture, rasa, bhava, emotion and sentiments, human anatomy and scores of other important components essential to enjoy and appreciate any form of art.

The influence of India dances on other cultures can be better understood by understanding Nāțya Śāstra which is the heart and soul of all Indian dance forms and theatre. The impact of Nāțya Śāstra was first reflected by scholars in Germany and France who wrote articles taking excerpts from Bharata’s treatise, almost 20 years before it was published in 1894. Hayman, a German scholar first wrote an article on the contents of Nāțya Śāstra in 1874. A French scholar, Regnaud published parts of Chapters XV-XVI and XVII dealing with Vāchikābhinaya, dealing with prosody, meters and diction in 1884.

Chapters VI and VII are considered very important since they deal with Rasa and Bhāva, emotions and sentiments. Humans anywhere in the world have the same kind of emotions, with, may be a degree of variation in their expressions. These two chapters were translated into French and were published by Tome a French scholar in 1884 under the title Rhetoric Sanscrite. A student of Regnaud, J Grosset translated chapter XXVIII, dealing with music under the title Contribution l’etude de la Musique Hindoo in the year 1888. One of the most important works based on Bharata’s Nāțya Śāstra was Sylvian Levi’s Theatre Indian published in 1890. It is surprising to see how Nāțya Śāstra influenced scholars across Europe even when it was still unpublished and only available in manuscript form!

Once the full text of Nāțya Śāstra was published and later commentaries on the text were discovered, we find many translations in English and many other languages of the world and many regional languages in India. A close look at Nāțya Śāstra reveals that Bharata’s work encompasses all forms of dance and influenced most South Asian countries. The text and its contents are universal in nature.

If we define culture as one which refines society, provides a sense of aesthetics and holds respects to its traditions and customs, then Indian classical dances have admirably influenced many cultures across the globe. There are many areas on which the Indian dances have left their indelible impressions. Let us study some of those prominent areas on which they left indelible impressions.

1. Kinesthetics & Kinesiology:
These are newly discovered terms which deal with understanding the anatomy of the body and mechanics of body movements. These are new subjects studied at the University level to understand and find the optimum use of the body movements. Bharata’s Nāțya Śāstra written 2200 years ago has an amazing and scientific classification of the body parts based on their movement and usage in dance. Indian dances adhere to the tenets of Nāțya Śāstra. It has 36 chapters and contains 6000 verses. There are five chapters dealing with the movements of the body and gestures related to expression. For example, Bharata has divided parts of the body into major limbs, minor and subsidiary limbs.
Major limbs are 6 in number: 1. Head 2. Hands 3. Chest 4. Sides 5. Waist and 6. Feet.
6 Minor limbs are: 1. Eyes 2. Eyebrows 3. Nose 4. Lower lip and 6. Chin

Indian dance is governed by the four types of expression listed in the Nāțya Śāstra. They are known by the term abhinaya. They are expression thru body known as āngikabhinaya, through makeup, known as āharya abhinaya, through lyrics and words, vāchikbhinaya and expression of emotions, sāttvikabhinaya. The very word abhinaya is derived out of two words in Sanskrit abhi and naya which mean leading towards. Abhinaya is that which leads the audience towards experiencing Rasa, the emotions and sentiments embedded in a story or even in a song. The concept of experiencing Rasa was termed as catharsis by Aristotle almost at the same time when Bharata defined and dealt with Rasa in his treatise.

Experiencing Rasa is a great human element and according to Indian classical dances and theatrics, it is not common to all. In a story like that of Ramayana, when Rama and Sita were separated, some people experience sorrow and have tears in their eyes whereas some others may not be moved by the emotions expressed on the stage. Indian aestheticians have given the term sahrudaya, which may be translated as connoisseur.

Etymologically the word sahrudaya means one who has the same wavelength in sharing the emotions of the poet or the author in experiencing the sentiments. That is the reason why irrespective of the language and music people across the globe enjoy Indian dances. This is a very sensitive component of every culture to feel the pain or pleasure of the fellow human beings. Aesthetics has no geographical or linguistic barriers, so do dance and music.

In Indian tradition music dance and drama are inseparable. There are treatises which defined music as ‘song, instrumental music and dance these three put together is known as music’:
gītaṁ vādyaṁ tathā nr̥tyaṁ trayaṁsaṁgītamucyatē – (Sangīta Ratnākara Ch I – 21)

Music and dance form of a part of human life in India as in many cultures across the globe. In folk lore we have dances and music associated with every aspect of human life; from womb to tomb, cradle to grave. Ancient civilizations have many things in common in the history and evolution of humanity. India with its vast diversity, contributes to this phenomenon immensely.

In the South East Asian countries, we find a lot of similarities in their cultures, shared values and even representation of stories of Ramayana or the Mahabharata. Indonesia, Cambodia, Vietnam, Malaysia, Sri Lanka, Singapore and many other countries reflect major influences of Indian dance, music, epics, traditions and customs.

Indian dances show through their stories and themes which very often revolve round the epics and purāņās, some human values common to many cultures all over the world. If audience are moved to tears when Siva’s consort immolates herself for the ignominy and disrespect of her father towards her and her husband, it shows how ego destroys relationships. The concept of Siva and Parvati sharing half their bodies defines the arthanārīśwara phenomenon to show the respect given to women in Indian culture. There may be aberrations here and there, but most themes of Indian dances revolve round two major emotions of humanity all over the world, love and devotion. Many times, Indian ethos depict very thin lines between love and devotion and rightly so.

Indian dances are not just dances, or exercises of gymnastics. They envelop many layers of components of human values, culture and knowledge. Bharata mentions in Nāțya Śāstra, Chapter I- 116 , there is no knowledge, no sculpture, no education, no art, no yoga and no action that is not reflected in dance:
na tat jñānaṁ na tat śilpaṁ na sā vidyā na sā kalā
na sa yōgaḥ na tat karma nāṭyēsmin na dr̥śyatē