“I Love the Way Indian Music Fits into Vedic Philosophy, It Makes Sense of the Way Music Works” 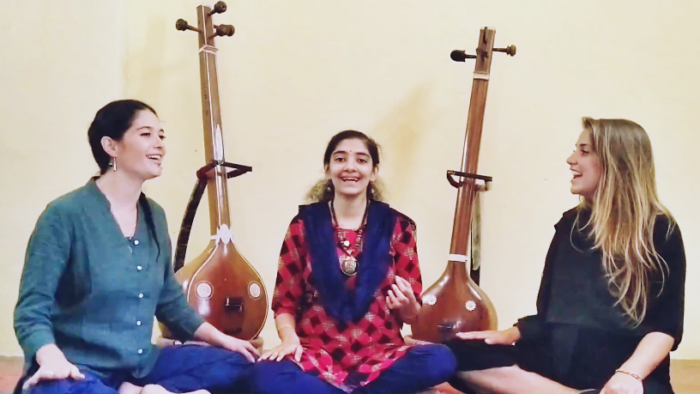 Karina Bontes-Forward of Australia and Loes Van Hapert of Netherlands came to Mysore for different reasons. But both ended up learning a special vachana from Surabhi Pusthakam Narasimhan, faculty at the Department of Carnatic Classical Vocal Music at the Karnataka State Dr.Gangubai Hangal Music and Performing Arts, University, Mysore.

The University organizes Inter Cultural Exchange programmes where non-Indians come to showcase their art styles. Loes’ song was a small harmonic piece which enticed Surabhi to try out her idea of harmony in Carnatic Classical Music.

Vachana Sahitya is a form of rhythmic writing in Kannada that evolved in the 11th century CE and flourished in the 12th century, as a part of the Sharana movement. The word ‘vachana’ literally means "that which is said". Surabhi thought the meaningful prose would be a good selection for the visitors.

The song that immediately came to her mind was ‘Ivanaarava Ivanaarava’, a Vachana by Basavanna in the raga Vakulabharana. “This song has universal acceptance and I felt it was apt to experiment with harmonic melodies,” says Surabhi.

Oh the Deity of kUDala saMgama, make (me) think that "I am a son of Your house."

Surabhi says when she met Karina and Loes she felt like teaching them the song. “I taught them the song with the harmony and they could grasp the tune and the lyrics within a few hours. When I explained to them the meaning, they felt good to be a part of such a meaningful composition. They made sure that they pronounced the words properly and they practiced the lyrical part well and learnt the words by heart. We recorded it the following day and uploaded it on Facebook and Youtube.”

Karina is Australian born and her father is Chilean, an influence that can be seen in her music. She says she mostly plays Latin American folk music. “I grew up playing classical Western violin, before I moved on to guitar and voice, and in the last few years have experimented with many different instruments, the bansuri being the most recent.” An environmental educationist she enjoys travelling and hearing the music of different cultures which inspires her to learn more.

Karina had originally wanted to learn the bansuri, but “I hadn’t found a teacher in India until I met Loes, who came to Mysore to find a Vocal Music teacher. Her Tabla teacher recommended a Bansuri teacher and that was it! I also learnt singing from Loes as she had her classes. We practiced together with singing and tabla, though my bansuri isn’t good enough yet. I am a beginner but I hope to continue.”

She says her bansuri teacher introduced her to both Indian philosophy and music theory in the classes she took from him. “His explanations included so much about the cultural context of Indian music. I very much like the way that Indian music fits into Vedic philosophy, it makes sense of the way music fits into the world.”

Karina says she tried to attend concerts while she was here. “I also asked people about all the different things they know about music during my travels through the south - it helps to talk about how normal people interact with their ancient musical tradition.”

Karina speaks a few languages and ‘I really love learning other languages, so I didn’t feel like it was too hard, but it’s always a bit of a challenge learning words you don’t understand the meaning of. I have been studying Malayalam and Kannada a little too so I was already familiar with the pronunciation,” says Karina.

Musically, it was a little more difficult. “The whole system of Indian music is different, so that’s a big adjustment - you have different scale notation, and many ways to classify music that is different to Western music, such as the taal. Also the way the voice is used is very different, it is very beautiful and quite difficult, and I love it - it has to be very flexible,” she adds.

Loes from the Netherlands is a music teacher and conductor of choirs. She watched videos on Youtube about Indian music and has taken lessons in Carnatic singing and the Tabla. She is in awe of the Indian voice. “I admire the flexibility of the voice. Indian vocalists are very well trained with a lot of subtlety in the voice. Also Indian music is very creative with melodies and we have to catch the notes (gamaka’s). I think Indian music is very strong in thinking melodically while in the Netherlands the harmony is a strong base for all the music that we make,” says Loes.

Surabhi says that the universality of music allows meaningful collaborations. “Music is present everywhere; in India, Netherlands, Australia and anywhere else. The meeting point is when likeminded musicians meet with the idea of making collaborative music that brings happiness and joy. Magic happens when different styles of music are put together consciously with the intention of producing melodious tunes. This is what happened when the three of us come together.”