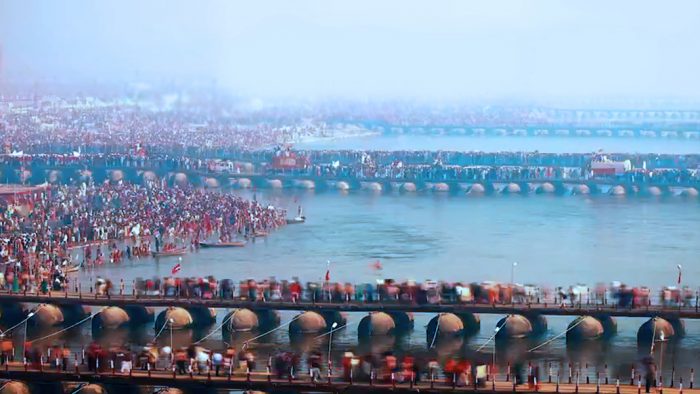 This article first appeared in DailO on 30th January 2019.

To envision that the Kumbh can be branded as an enabling tool for India?s diplomacy must be acknowledged as an out-of-the-box idea. The current political will, and cultural warmth, greeting foreign visitors at the Kumbh is highly significant.

The Kumbh Mela has catalysed Indian thought to pervade the world and the human mind in subtle and nuanced ways. The world?s largest peaceful congregation has enhanced India?s image abroad and has proved to be an important aspect of the country?s ?spiritual diplomacy?.

India, this year, has taken special and specific efforts to showcase to the world the USP of the Kumbh Mela. Hundreds of tourists from around the globe are thronging the Kumbh to get an experience of a lifetime and are leaving absolutely astounded by the scale and sheer magnitude of such a gathering.

Anna Hermina, a resident of the Netherlands, has changed her name to 'Swarnalakshmi' after being deeply influenced by Hinduism. Speaking to India Today TV, Hermina went on to reflect on her experience of taking part in the Kumbh Mela, "Such a huge gathering is just incredible and shows the unity in this country. I was thinking of coming here during the Kumbh for 20 years but have finally succeeded today. I changed my name around four years back after being influenced by Hindu culture and traditions. Such a huge congregation is impossible in my country."

The Kumbh Mela received a much-needed endorsement at UNESCO very recently ? UNESCO listed the Kumbh as part of their Intangible Cultural Heritage of Humanity, during its 12th session at South Korea.

The exact attribution given to the word 'intangible' by UNESCO is noteworthy. It says, ?Intangible heritage refers to oral traditions, performing arts, social practices and rituals, festive events, knowledge and practices concerning nature and the universe or the knowledge and skills to produce traditional crafts, which communities across the world associate with their culture, and pass on from generation to generation.?

UNESCO?s explanation for why the Kumbh made it to the list is worthy of mention as well.

It said, ?Kumbh Mela made the list because it is the largest peaceful congregation of pilgrims on earth, and the event encapsulates the science of astronomy, astrology, spirituality, ritualistic traditions, and social and cultural customs, and practices, making it extremely rich in knowledge."

This affirmation of Kumbh by UNESCO stands against the backdrop of its decision in 2003, when it realised the need to conserve intangible heritage as it is equally important to conserve culture.

The Kumbh is an unforgettable experience. Past editions have seen tourists from distant countries like Russia, who decided to experience the Mela despite not knowing the local language. This truly speaks volumes of the experience that the Kumbh allows one and all.

Clearly, the Kumbh Mela is proving to be one of India?s most effective soft power tools by attracting foreign tourists in several of its editions. This is not just restricted to tourism per se, but professionals and enthusiasts from abroad continue to visit Kumbh to study its impact as well. An interesting example was discernible in February 2013, when over 50 scholars, academics and philosophers from the world?s top Ivy League universities in the US, including Harvard and MIT, visited India just to understand the phenomenon called the Kumbh Mela and see how it is pulled off with such remarkable efficiency.

?In today?s information age, victory does not depend on whose army wins, but on whose story wins,? said John Arquilla, an American analyst and an academic of international relations. The Kumbh Mela has been a trendsetter for the great Indian story to be told and retold every time it is held.

The Kumbh has never been about stamping one?s authority or operating through coercion. With each passing edition, the Kumbh has signified the spirit of justice, equality, liberty and fraternity.

Interestingly, this time India is making a conscious effort to integrate the Kumbh story into its foreign policy orientation.

The Pravasi Bharatiya Diwas, which was started by the late Shri Atal Bihar Vajpayee?s NDA government, was held recently in Varanasi with an objective to attract the delegates to also visit the Kumbh. In addition, for the first time in the history of the Kumbh, the ambassadors of countries and heads of missions based in Delhi were taken especially to witness the preparations in the run-up to the Kumbh.

As a mark of honour, flags of 125 countries were raised at Prayagraj. Uttar Pradesh, the heart of India, which recently saw the visit of the South Korean First Lady, is now opening its gates in a successive time frame to the world?s largest peaceful gathering of humanity.

What is also relevant to note here is that this spiritual diplomatic effort is not just being restricted to Delhi or government-to-government interactions and summits around Delhi. Although an initiative of India, its global vision of unity has resonated with travellers from around the world.

To envision that the Kumbh can be branded as an enabling tool to India?s spiritual diplomacy must certainly be acknowledged as an out-of-the-box idea. Whether this reaps the desired outcome is an assessment that will be made in due course.

There may have been suggestions to do this during previous editions as well, but the current Central and State Government machineries have left no stone unturned to think of it cohesively and to set the wheels in motion. This important process requires strong collective political will ? a benchmark has certainly been set this time, in terms of thinking big and thinking global

Harvard Professor Diana L. Eck, in her book India: A Sacred Geography, has written about how every place in India significantly resonates with its culture and therefore is sacred in its innate nature. She says, ?What is clear from the study of India is that its geographical features ? its rivers, mountains, hills, and coastlands ? no matter how precisely rendered, mapped or measured, are also charged with stories of gods and heroes. It is a resonant, sacred geography."

The Indian Government's foreign policy doctrine, as enunciated in April 2015, has termed 'Sanskriti Evam Sabhyata' ? cultural and civilisational links ? as the key pillars of its foreign policy.

And the demand for this indicates that this will be a continuum.