How a 15th Century Telugu Poet Found His Way to America 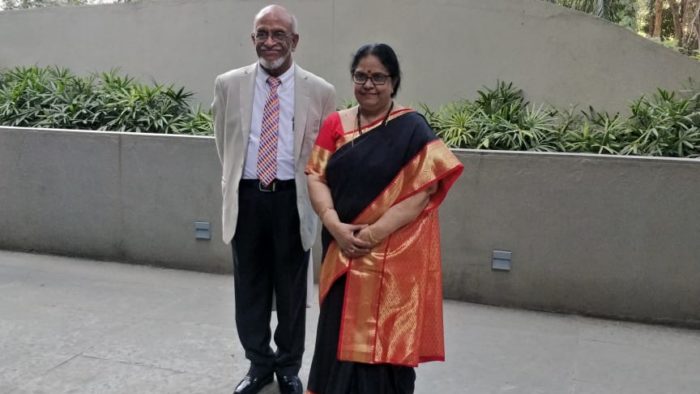 When the copper plates (Tamra Shasana) bearing tens of thousands of Annamacharya’s kirtanas were unearthed from within the Venkateshwara temple in Tirupathi, they still awaited their destiny -- the sahitya, the bare words, all of them in praise of Lord Venkateshwara, had to be tuned so that the world could enjoy their poetic excellence.

The man who was given that task, among the many who were eager to do it, was Nedunuri Krishnamurthy. He used to insist that the ragas were chosen by Lord Venkateshwara himself – and he seemed to mean it, the little smile and twinkle in his eye notwithstanding – “no exaggeration” at all, he would say. There are others who have taken the spirit of these words and spread them in foreign shores. Dr Sarada Purna Sonty and Dr Sriram Sonty established the Sri Annmachaya Project of North America (SAPNA) little knowing that this 15th century Indian saint composer would be studied and cherished by people across America.

Annamacharya is believed to be the first among the hymnographers in Telugu, not just chronologically but also in terms of establishing Telugu as the ‘mother tongue’ of Carnatic music. After the Shaivite Naayanars of the 3rd century and Vaishnavite Alwars of the 7th-13th century, we have Annamacharya - the earliest known composer of devotional lyrics, who composed in Telugu and his wife Tallapaka Timakka, one of India's first female composers composed the Subhadra Parinayam.

Dr Sarada had handwritten all of Annamacharya’s 32000 krithis, when they were first published by Tirumala Tirupati Devarsthanam into 31 volumes in the 1970s. There was no photocopying in those days. Her first PhD was on Annamacharya’s songs for dance and her second on the 36 lakshana granthas of Sangeetha Shastra, all of which would propel her towards a journey of spreading the beautiful Telugu that Annamacharya was known for.

This year SAPNA celebrates 32 years and what started as an Annamacharya concert, dance and conference programme in Chicago has now completed 4,000 programmes across the United States.

Dr Sriram says that SAPNA’s work in the United States can be divided into three decades – the first when few knew about Annamacharya, even among those who were learning Carnatic music or dance. So they invited musicians from India and hosted a minimum of 12 concerts a year and the maximum of 80 by renowned Veena player Chitti Babu across America.

When Chitti Babu visited them for several months, Dr Sarada took him to many high schools music departments. He would give lec-dems, which sometimes went on for four hours in schools and also in universities in Cincinnati and Oxford in Ohio. “All the students were so fascinated. He would play Sama Raga, a very simple raga with few notes, with not much scope for elaboration. He could have taken the most complex raga, but the message of Annamacharya he wanted to convey was so real, so endearing, it was so simple and so one with all of us present.”

In contrast was Nedunuri who was complex in his ragam and tanam and was a musician's musician. Then there was the still-but-a-child Mandolin U Srinivas on his first ever tour abroad who played a jugalbandhi with renowned violinist Carl Linden. “Carl Linden bought many of his western classical music students and they were very fascinated by Mandolin Srinivas - by his playing, his instrument, how he handled the music, how he brought the essence, the spirit. He was a person who mesmerised mainstream United States,” says Dr Sarada. Dr Sriram says in the second decade SAPNA focused on introducing Annamacharya to teachers, both dance and music and in the third decade the teachers spread the word to students.

The lyrics of this saint composer were categorised into adhyatmic and sringara even in the copper plates. However no notations and no correct tune of singing was defined. He used several traditional and ancient ragas, nearly 75 of them. The names of some rare ragas were also found in the copper plates including very rare ones like Aabali, Konda Malhari, Amara Sindhu etc which are obsolete today.

Born in Tallapaka, a remote village in Andhra Pradesh on May 9, 1408, Annamacharya has also composed Desi Suladis, now obscure, 12 Satakas on Sri Venkateshwara and on his consort Alamelumanga (Sataka denotes 100 verses in Sanskrit). His literary work “Venkatachala Mahatmam” and a poetic work “Chakravala Manjari” are immortal works. Another significant contribution in Sanskrit was Sankeertanaalakshanam, an authoritative work explaining all types of musical forms of his times. It paved the way to later music compositions in Carnatic music, write the founders in their new book Sapna@32 which was launched at the Indian Music Experience in Bangalore.

There are several reasons why his songs have become popular both among young Indian students as well as non-Indians. The social aspect of his songs as well as his encouragement of women’s rights appealed to liberal Americans.

Students of music found it easy to perform the folk style of Annamacharya. “They use their western instruments and have been performing these krithis at school. In the last 35 years, we have seen people focus on the religious philosophy, ritual philosophy, social conditions, creative writing, women’s rights, social rights, equality issues addressed by him,” says Dr Sarada.

Due to the efforts by SAPNA, mainstream Americans today know about Annamacharya a 15th century Indian whose works were written in copper plates. “In the University of Chicago, one student came from Brown to Chicago to study our South Indian music. We had a discussion and then he took the songs of Annamacharya, the themes and compared that to Western Classical music. Slowly we are getting into the realm of mainstream American musicians,” says Dr Sarada.

Dr Sarada also worked with Harvard educated Professor William Jackson when he took her guidance to write his book on Annamacharya.

Annamacharya’s songs have contemporary appeal because “he uses colloquial language - a very easy, day to day, living language. If the lyrics are in Sanskrit, some Westerners have problems with pronunciation. Since these are in simple Telugu, the phonetics is easy for them. They don't need to use all the 16 muscles that we have in our oral cavity as Sanskritists do,” says Dr Sarada.

Asked if the music is the pathway to learning Telugu, Dr Sarada says actually “there are Americans who are learning Telugu just for the sake of the music - Carnatic music. I can vouch for the environment in Chicago. We have around 500 students learning music and we talks hours together about the songs and the pronunciation. Annamacharya used almost all the regional, dialectical family languages. He used the spoken words of day to day life in songs like kolatam pata, to accompany small dances that we do every day. He made every action of ours into a songs, into a dance. What he teaches us is that life is nothing but a joyous experience. We have been trying to communicate that to students, to musicians and especially to Westerners, for whom life is materialistic.”

Telugu as a language is being introduced at every level in American universities and there are nine departments of South Asian studies in the United States where Telugu is taught as a subject. “I am working with them through Hyderabad University to establish these and get accredited college courses at the intermediate level as well as at higher levels. We started Silicon Andhra, but shifted it from Chicago to California as California has higher population and a pleasanter climate,” says Dr Sarada.

One of SAPNA’s greatest contributions was to take the Veena to the US. Extremes in weather would make the instrument warp. Dr Sarada met Jon Borthwick Higgins, also known in India as Higgins Bhagavatar, an American musician, scholar, and teacher known principally for his rare skill as a non-Indian in the field of Carnatic music. Jon Higgins told Dr Sarada that he was trying to make the Veena as there were no Veenas in the US at that time.

There were only two Veenas in Chicago, one of which belonged to Chellam Balakrishna and in her Veena, “half the Melam (portion of the Veena where the frets are fixed) worked and the other half didn’t. I was wondering how to introduce this instrument, our national instrument to the United States,” says Dr Sarada.

She would consult many North Indian musicians who travelled along with their sarods, sitars and sarangis, violin, flutes, everything but the Veena. So about 15 years ago along with Kashmiri Professor Shelly Kumar, founder of the South Asian Classical Music Society in Chicago, they decided to bring a few Veenas and see how they could protect it from the weather. “So we first got five Veenas and tried not to give concerts during winter. We would bring the Veena out in summer and rest of the time it stayed indoors.”

Once when they played Amrita Varshini, famed to induce showers, with the five Veenas, it snowed. From that year they began thematic Veena performances, increasing the number of Veenas from 5 to 9, 20, 50, 80, 150. Today, there are 300 Veenas in Chicago.

When Hollywood released Jungle Book, the Veena was the main instrument played by the rare Veena owner in the early years - Saraswati Ranganathan from Chicago. “She joined with other string instruments including the Hawaiian guitar, Brazilian guitar, Moroccan guitar. Five different guitars paired up with the Veena as the central instrument.”

Jungle Book began a trend of keeping the Veena in the middle and combining it with other instruments. “We took Moroccan, Blues, and Jazz, with the Veena being the main instrument. People loved that. Visually, the Veena is so beautiful,” says Dr Sarada.

Veena makers Shruti Laya ship the Veenas, 20 at a time to Chicago. There are teachers from seven different Veena sampradayas in Chicago today and they come together to show the nuances of their playing techniques. SAPNA did a 24 hour Veena concert, where there was not a moment when the strings were not plucked, followed by another 12 hours where the Veena was combined with other instruments.

IME Director Outreach and Vainika Dr Suma Sudhindra has take her Tarangini Veena to SAPNA three times. The Tarangini Veena is a compact version which allows for easy of carrying while travelling abroad.