‘He Who manifests as Sanskrit, Tamil & Music’: A Tribute to Tamil 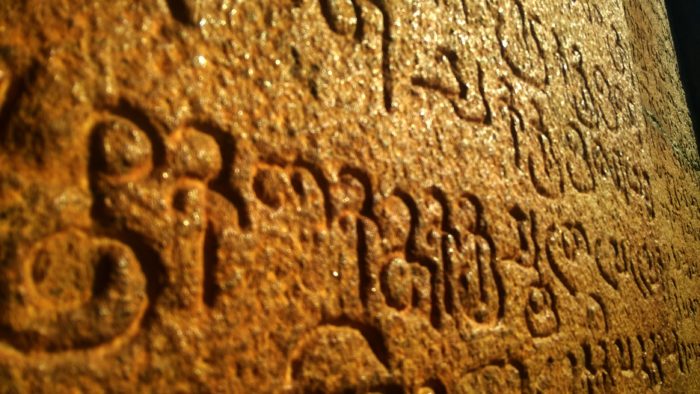 Karuna Sagari Venkatachalam a classical Bharatanatyam dancer currently under the mentorship of veteran danseuse, Malavika Sarukkai inherited a rich oral-matrilineal legacy in poetry and music. She received rigorous, in-depth instruction in bhakti spiritualism, poetics, and performance from her grandmother Swarna Somasundaram, an esteemed scholar of classical and medieval Tamil literature.

Her foray into choreography led her to explore Tamil works such as Tevaram, Tayumanavar, Kambaramayanam and Manimekhalai. Dance choreography allows her to pull out a Tamil poem from before two millennia and employ an art form which is handed down over a few centuries while keeping the message contemporary, alive and relevant. She treads carefully between abstract concepts, concrete happenings and harmonious aesthetics.

Karuna Sagari is the founder of Bhakti Natya Niketan (BNN) an institution which offers Bharatanatyam classes for students of different ages and levels in the Kalakshetra style in the organic pedagogy devised within BNN. She is an Aikya Awardee presented with the title, ‘Women defending our Culture’ by Global Adjustments. In this interview with CSP, she speaks about Tamil, a language spoken widely in South East Asia, as a source of Soft power.

How has the declaration of Tamil as a classical language helped the growth of the language?

The basis of declaring Tamil a classical language was for its antiquity, volume of literature and linguistic continuity. (The language had literature from over two millennia while being a relevant spoken and written language in modern times). Recognizing these traits in the language, there was an official declaration in 2004.

When we think of why the validation needed to be official, one can trace it to the rediscovery of Tamil's classical texts. In the days of U Ve Swaminatha Iyer, people read only medieval Tamil literature that were written post 7th and 8th century. Scholarship started and ended with medieval literature. When the Sangam anthologies were discovered and published in print, the Tamils realized how much could have been lost due to loss in transmission from palm leaf manuscripts to print. So, for the Tamils, the need for validating the language with a sense of renewed passion was considered necessary.

What is Tamil’s relationship with Sanskrit and how this can be a point of interest to International linguists. What does the changing relationship and borrowings between these two languages teach us about how languages interact develop and change?

As a student of Tamil, I can safely say the earliest available grammatical work, the Tolkappiyam, speaks of Vada sol- "Word(s) from the north". This shows that the two languages have co-existed and the grammarians have certainly acknowledged that. Also, in medieval Tamil literature of the Azhwars and Nayanmars, they have freely used the mythological stories from the Puranas, but brought in nuanced symbolism to these forms and stories. They acknowledged the presence of both the languages (Sanskrit and Tamil) to communicate with the Supreme. I would like to quote Appar, "Aariyam Tamizhodu Isai aanavan" - "He Who manifests as Sanskrit, Tamil and Music". They have been transcultural and aware of it. It is us who have lost the thread in the way!!

In a globalising world where only a handful of languages tend to dominate how should regional and sub-regional languages maintain and cultivate their language and literature. How and why is this of value to the larger global community?

Every language has a beautiful perspective to the world. When we take away the number of perspectives in the name of ideologies, our vision is poorer. Another dimension can never hurt one's vision, but the lack of it certainly would. When purists or language enthusiasts become fanatic about their language alone, they will only be able to reach out to the people who already speak their language. For instance, what AK Ramanujan has done to Tamil is incomparable, because he introduced the beauty of the Tamil language and its poetry to Western Academia. He could not have not brought the poetry the attention and adulation it deserves if he hadn't written made translations in English. To have integrity to the language, it has to come with one's rootedness in one's language while creating channels to take the richness to the rest of the world whether the channel is English or technological adeptness.

Is Tamil language an element of India’s soft power in a way that distinguishes it from other languages?

India's soft power is its plurality. The Tamil language brings stories of people who come from varied backgrounds not as just supporting characters but central characters. They have documented the lives of poets, drunkards, kings, fisherwomen, hunters, plunderers, realized souls, rebels, reformists, house wives, mendicants, fanatics, imperialists, renunciates, the rich, the poor, the faithful, the philosopher and so on. In AK Ramanujan's word, they 'observed' nature and not 'ordered' them, nature of the physical world and the interior landscapes of the human mind.

How is Tamil different from other Indian languages and what is its appeal to people outside the Indian fold?

As a person who has had immense love for the language, I have managed to retain my love for Tamil without the politics involved. For me, love for a language is like love for one's mother. You don't love your mother because she is beautiful, brilliant or superior to others. You love her because she is yours. I prefer to enjoy Tamil as she is rather than in comparison.