From Form to the Formless 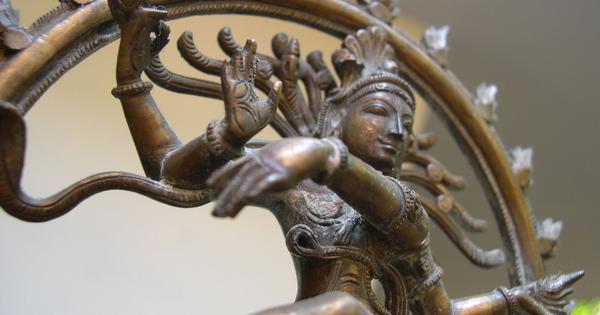 It is a normal course of proceedings for temples in India to be closed following morning worship, re-opened again during the late afternoon and locked once more at night.  Devotees should plan their visit according to temple timings to ensure proper darshan of the Lord.

Following the morning ritual worship at the Gangadhareshwara temple in Rishikesh, a routine action sparked my curiosity.  After the morning puja, I would often sit for meditation.  One morning, as the pujari locked the door to the garbagraha, a slew of doubts struck me: is the all-powerful Lord Shiva now trapped behind the door?  Why is he locked up and kept separate from his devotees who wish to see him? Why is he in a dark little room we cannot enter?  Does he function only from that space?  When we crowd in front of the garbagrha, stand on our tip toes, elbow each other for a glimpse, who are we really looking at?  What is this idea of an all-powerful God-hood that we have superimposed onto a piece of rock that is stuck inside a tiny room?

If Shiva is all-pervasive, the cause of creation, if he is there in every rock, every tree, if he is the content of the air we breathe, why don’t we bow down and do namaskara to everything? Why do we often walk by without giving the tree or pebble in front of us a second glance?  Is the lone tree less powerful than the mantra-fied linga?  What is the significance of this type of worship? I recalled a workshop by Sri S. Jayachandran, noted danseuse and scholar who picked apart our notions of Chidambaram and the dancing lord Nataraja.

Shiva in Chidambaram has three aspects: aroopa: formless, rooparoopa: formless form and roopa: form.  The formless is worshipped as akasha lingam, or space.  Rooraroopa is the spatika lingam, to which abhishekam is done daily. This linga is a form which represents all forms.  The famed Chidambaram Nataraja in the Ananda Tandava pose with the left leg lifted is the roopa: anthropomorphized form.   Worship starting with the relatable anthropomorphized form of Shiva can eventually lead the devotee to the worship of Shiva as the formless, boundless, reality of existence.

The purpose of the temple dancer was to invoke the lord through her dance just as the lord is invoked through mantra. For the sake of worship and building a relationship, the lord is made to be relatable in form.  As one delves deeper into the meaning behind worship, the meaning behind mantra and the significance of the temple structure, all the external forms of worship then become internalized as they are representing one’s own body, one’s own life experience.  The idea of the existence of a conscious being is made clearer through the relentless pursuit of truth in the form of knowledge and all forms of expression, be it dance, music, sculpture or Veda are representatives of the same concept of ‘Godhood,’ or reality.  The practice of art helps to attain a subtle mind fit for this contemplation.

The seeming movement from formless to form and dissolution of form is nothing but the work of the greatest choreographer of our lives whose abode is in our lotus-heart, ever-available, ever-shining.

The five sabhas of the Chidambaram temple are akin to the panchakoshas.  The innermost, chit sabha represents the anandamaya kosha, the kanakasabha: the vijnanamaya kosha, the nrttasabha: the manomaya kosha, the devasabha: the pranamaya kosha and the rajasabha represents the annamayakosha.  There are 21,600 golden plates on the top of the hall.  These represent the number of breaths taken in a day.  There are 72,000 planks in the floor, representing the nadis through which the prana flows.  Every nail used to fasten the planks is akin to the hairs on the body.  64 rafters represent the 64 kalarupas or systems of knowledge.  This shows that the concept of Shiva exists in the entire temple complex, not just in the garbagrha.

As the dancer dances to lilting music, at times bursting into vigorous nrtta, at other  times engaged in a grandoise display of deep-seated emotion, it is form reaching to go past the limitations of form, for that experience where dancer and dance merge into one.  While worship begins with the anthropomorphized Nataraja, it moves onto  a subtler form of the spatika linga and then to the Chidambara Rahasyam: the akasha linga.  This akasha linga is nothing but the chidakasha, residing in oneself of which the conscious being is the witness.

The greatness of Indian art is that Rasananda: where duality is sublimated and the witness, or consciousness stands illumined, is the sought-after goal for each and every performance and practice session.  The artist becomes fine-tuned and meditative over time and is akin to the pujari of the temple who is priviledged to enter the garbagrha.  The artist has the capacity to invoke the lord in the garbagrha of not only his own mind, but in the mind of the on-looker as well.  This extension of worship from temple to stage can permeate all aspects of life making the life of the devotee and artist harmonious and steadfast.

“All great religions of the world have come out of one Truth.  If we follow religion without practicing the Truth, it is like the blind leading the blind.  Those who belong to God love all.  Love is the religion of the universe.  A compassionate one transcends the boundaries of religion and realizes the undivided, absolute Reality.” 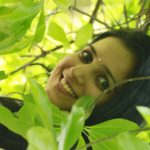 Ishwarya is a trained yoga teacher, therapist and Bharatanatyam dancer. A native of Vancouver, Canada, Ishwarya has been living in India for the past 10Read more