Food & Faith: Shoba Narayan Walks Us Through the Spiritual Food of India 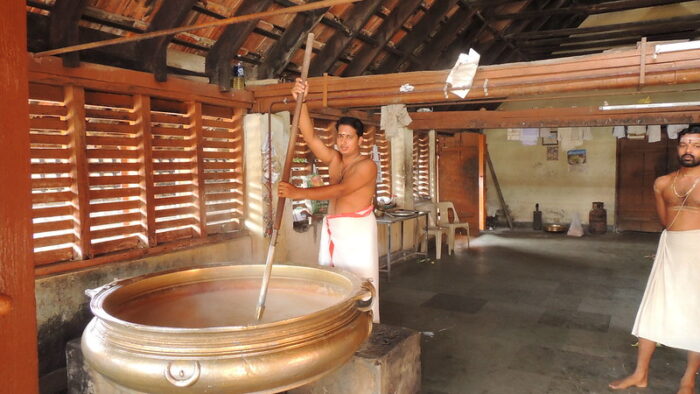 Shoba views cuisine as a vehicle for storytelling. She has been interested in it for the last 25 years as a food writer and began work on Food & Faith in 2015.

She moderated CSP’s session on jewellery at Namaste 2020. See here: Kavaca: Quintessence of Indian Jewellery - Center for Soft Power (softpowermag.com). In the interview below, we speak to her how India can showcase the rich complexity of her food to global acclaim. In the past food was intrinsically connected to worship. How prevalent is it now in urban metros?

As you know, there are many Indias. I feel that the connection between food and faith is still prevalent in India, both in rural and urban areas. It depends on the household and how devout the household is.

I have examined various factors such as economic strata, caste, age, class, education level, widely traveled or not, and family. It is difficult to come up with a correlation between each of these factors and whether the person is religious or not.

I have met wealthy people who are religious and wealthy people who disdain religion. I have met global citizens who are rooted in their faith, and immigrants who have given up on their faith. It would be easy to say that young people rebel against religion but if you visit our temples, churches, mosques and shrines, we see a large number of youth there. So it is not a simple thing to create a hypothesis based on faith. What are the forces that have led to the preservation of this connect in India? Is it the same across communities?

India is one country where culture and society are intricately linked. In my research, I discovered that as countries got wealthier, they turned away from religion. Most modern societies have moved beyond myths into the worlds of science and rationality. Their creation myths, the way their ancestors made sense of the world, have been relegated to museums, theatre, storytelling and history textbooks. Today’s Rome with its Prada and Bottega Veneta stores is a far cry from the time when Roman gods walked the earth. The same goes for other ancient cultures such as Greece or Egypt. In Cairo today you don’t see Egyptian gods like Ra and Anubis on street corners in temples. But in India we do.

India's genius in comparison to much of the global world is that it preserves and values the ethos that comes from our myths and traditions.  It is as if we Indians are still acting in a sacred play that spans millennia. The Romanian religious historian Mircea Eliade called it sacred and profane. Myths, he says, are where the world of the gods breaks through the clouds and mixes with the world of humans. In Hinduism, we call these avatars, where the gods literally walk amongst us and teach us lessons, show us how to live. In India, we have preserved this mythical element.  It nourishes us. Your book is a combination of a travelogue and a cuisine book, two great sources of soft power.  How can we entice visitors to travel across India to sample this variety?

In order to do this, we have to figure out how to package the nuances and magnificent diversity of our traditions, rituals, stories, and symbols.

The Indian mind sees things in a non-linear fashion. This has been described by AK Ramanujan in his wonderful essay, "Is there an Indian way of thinking?" (ramanujan.pdf (profcohen.net)).The nested stories of the Kathasarithasagara are another example of this approach.

In terms of Indian aesthetics, India is a more-is-more culture rather than a less-is-more culture as described by the architect Mies van der Rohe. We are exuberant, colourful, and extravagant in terms of our stories, festivals, food and gatherings.

The problem is that it is difficult to package such an ethos into concise and specific products. In the modern world people want simple and minimal solutions. They favour an approach that is rooted in one or two ‘take aways’ rather than the layered approach of India.

Marketing mines have to apply themselves to figure out how to funnel the extravagance of India into deliverable cultural ‘products’ and experiences.

One country that has done this very well is Japan and we can learn a lot from it.

Could you describe how food is a carrier of culture for Hindus in temples. Do practices vary?

Food becomes sacred food after it is ritually offered to God. Neivedhyam becomes prasadam after it is blessed by god. The word prasadam literally means mercy or blessing. Azhagar temple prasadam was a variation because its main prasadam is a savoury dosai.  Other prasadams include piquant lemon rice, bright yellow in color and speckled with black mustard seeds; tangy tamarind rice; sweet pongal flavored with jaggery, cashew nuts, cardamom and tons of ghee. But the pride of place goes to the Azhagar Kovil dosai, famed in the area for its taste. The word “dosai” is the South Indian, and correct way to pronounce what North Indians crudely call the “dosa.”

The recipe is simple and boils down to one foolproof cooking technique: the dosai is deep-fried in ghee, giving it a richness and depth of flavor that no amount of healthy, low-cal cooking can replicate. Pounded white rice is ground with whole black urad dal along with curry leaves, asafoetida, black pepper, and salt. The resulting mixture is deep-fried in large containers.

As is common in temple cuisine, all the ingredients are native to India. Whole black urad dal—Vigna mungo-- is an ancient bean, highly prized in India and Pakistan for its bland, nutritive properties. The two most popular breakfast dishes in South India, the idli and dosa, a fermented combination of dehusked urad dal and rice. The dosa at the temple doesn't tamper with this black bean. You cover a few religions in your book. Were there any surprises for you in any way?

Well, I really enjoyed the Jewish meal that I had.  For one thing, their halva is delicious!

My Israeli friend, Shai used to joke about the Jewish food philosophy.  “Every time someone tries to kill us, we eat,” he used to say.  “They tried to kill us; we won; now, let’s eat.”

During Rosh Hashanah, I dined with a Jewish family in Mumbai.  They are Bene Israeli.  Each dish has a meaning.  A bowl of ruby red pomegranate seeds signify bounty; apples dipped in honey for sweetness; dates which are food from the tree; leafy vegetables are called karsi in Hebrew, which sounds like the word, karet, which means cut off or destroyed. Similarly, the beets, which are served, are called silka in Hebrew, which sounds like siluk, meaning removal.

The festival is all about leadership, about winning, about being the head.  So Jews choose the head of the goat; the head of the fish and so on. Being vegetarian, I could not eat many of the dishes (smiles).

My favourite was the halva. Traditional Jewish halva is made with rice flour, all-purpose flour or maida, and sugar in the ratio 1:1:2.5. To this, add coconut milk and a pinch of salt. All the ingredients are mixed with a little water. The entire quantity is poured into a large pan and heated over a sigri or coal fire. After that, the art is in the stirring.  Most Bene Israeli families used to hire a man a few days before Rosh Hashanah just to sit and stir a cauldron full of halva for hours at a stretch. Once the halva reaches the consistency of, well, halva, or thick batter, it is poured into a large plate.  Dried fruits and nuts and sprinkled on top: skinned sliced almonds, skinned sliced pistachios, pine nuts, sliced hazelnuts, and others. The whole mixture is allowed to cool for twenty-four hours.

I have eaten many halvas in my life, but none as good as the one I ate for Rosh Hashanah at Ralphy and Yael Jhirad’s Mumbai home. The coconut milk gave it depth and density without increasing the sweetness. Do you think regional cuisine should be showcased better? Do you have  any suggestions?

A good way to showcase regional cuisines is to somehow get tourists into Indian homes. The reason is that in most Indian restaurants, spices and gravies are laid on with a heavy hand. It is quite different when we eat at home. Our food is very light, subtle and satvic. In order to showcase this, we need to encourage and patronise restaurants that celebrate and showcase recipes from various regions. Karavali restaurant in Bangalore is one example but there are many others all over the world.

The food served during different Indian ceremonies is very complex. Taste, diet and ritual come together very interestingly like in shraddham food. How does one showcase this complexity to the world?

I've visited Kyoto once as part of a journalistic assignment. There is a tourist organisation there that contracts with women who stay at home. For a good amount of money, tourists can visit Japanese homes, learn the chrysanthemum dance, experience the tea ceremony, learn how to tie the kimono and enjoy delicious home-cooked meals. You learn the stories, the culture, and the experience.

I can envision a similar thing happening in India where tourists are brought to regional Indian homes in order to learn how to tie the sari, draw the kolam or Rangoli, help with the preparation of a meal while learning all our stories.

There are songs where the menu at a marriage have been listed. Are there other ways we have preserved this cuisine?

Actually, our cuisine is quite well preserved. Partly because it is not marketed globally, it has preserved its essence. The thing with marketing and becoming globally famous as a cuisine is that global influences change the way the cuisine evolves.  In that sense, marketing our cuisine globally is a double edged sword.

Look at South American cuisines for example. Today some of the world's best restaurants are in Peru. Until now, Peruvian cuisine was untouched and unvarnished by global influences. Now that global chefs and foodies are congregating in Peru and Lima, you can see its cuisine changing and being ‘adulterated’ before our eyes.

Apart from the Jews have you looked at any other non-Indian communities. Has there been any exchange between people?

For my book, Food & Faith, I did not look at other non-Indian communities. Part of the pleasure of writing a book is to create boundaries within which the subject matter will fall. For this book I decided that it would be largely Hindu and definitely Indian. (Shoba Narayan has written about food and faith for over two decades.  She was the Hinduism columnist for Beliefnet and won the James Beard MFK Fisher Award for distinguished food writing.  She has been a correspondent for Gourmet magazine and has written about culture, food and faith in her columns and essays for Hindustan Times and The National Abu Dhabi.  Food & Faith brings together two of Shoba’s passions: spirituality and food. Find her at her website: https://shobanarayan.com. )