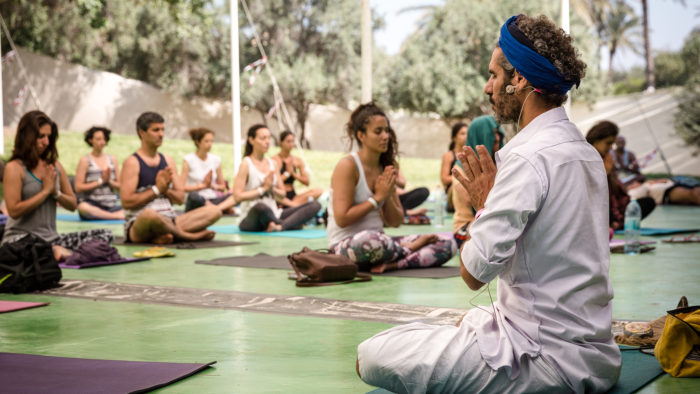 Sports had been a passion for Nir Haim Shakaroff, a former windsurfer who represented his country Israel at various international platforms. On a surfing trip to France, Nir met with an accident, paralyzing him for years until he recovered again. At the young age of 17, Nir had to let go of his love for sports and could only wait to recover completely through an intense medical routine. Amidst these conditions, Nir started learning Yoga and gradually spreading it across Israel.

Today, Nir organizes one of the biggest celebrations in Israel – the International Yoga Festival. The three-day festival sees the participation of Yoga experts and enthusiasts, musicians, spiritual seekers and culinary aficionados from across the world.

In this conversation, Nir shares his journey of discovering Yoga and his endeavor of spreading Yoga in Israel and across the world.

How did you discover Yoga in Israel?

As a young kid I had always been very passionate about sports from athletics to extreme sports. I was also very interested in philosophy and spiritual seeking.  have studied philosophy in high school and I really liked it and I had a lot of questions about the world, about the self, about everything. However, these two worlds, the physical side of the sports, and the intellectual side of studying philosophy were very separate for me. Worlds apart.

I met with a severe accident during a trip to France which made me immobile to a certain extent. I went through a long recovery period, first on a wheelchair and then on crutches. I realized that I had to get to know myself with new boundaries. Before the accident, I had no limitations. I could do everything, I had been very athletic, doing a lot of adventures and all of a sudden, I'm in the pick of my independent life where I needed help and assistance just to go to the toilet or to make a cup of coffee.

During my recovery years, I took all kinds of therapy methods – in the water, a lot of physiotherapy etc. I was willing to try everything that could helped me to get better and to go back to sports and my independence. After about a year, a friend of mine suggested that I should try Yoga at the country club. Back then, there weren’t many yoga teachers or studios in Israel. In my class, there were only women, most of them pretty old and I was the only guy, but I didn't really care because it was part of my recovery.

‏At the end of the first class I felt that I came home, that I found something that I had been searching for a long time. For the first time, I realized or rather felt that the mental, intellectual and physical side are deeply connected. Since then, I have been regularly practicing Yoga. Even during my years in the army, I would find solace in Yoga practice. Over the years, I have traveled the world, met several people, inspirational characters and teachers. Gradually, I deepened my research and understanding of Yoga and wish to take it across the world.

What relevance does Yoga hold for today’s generation?

I think Yoga is a great present for our era. It is becoming more and more relevant and crucial as time passes and as the world becomes more chaotic with endless distractions. With our attention span reducing and preventing us to be in the moment, Yoga shows the way of living fully and being deeply involved in life.

I see everywhere, people are losing connection with nature, with the beauties of life and ultimately losing control of their own lives. The first thing we do in the morning is open our phones which exposes us to multiple distractions of the digital world. We lose touch with the real world and also with our internal peace. Yoga helps to live in the present and take control of our lives.

Yoga is very basic yet has depth in it. It is easy and very accessible. All that one needs to do is sit in the room for a few minutes. If I would offer that in 5 minutes, I can change someone’s life through Yoga, people will take it. So here it is – 5 minutes of your day with Yoga will change your life. it's as simple as that and it's really amazing. This I think is the real power of Yoga and meditation which makes it relevant for the entire world. While some people start practicing Yoga for a specific purpose like weight loss or relations, they soon realize that Yoga changes many aspects of life – relationships, work, passion, consciousness and more. I think now it's almost a consensus that yoga is something so powerful and meaningful to the world, people are practicing yoga in every continent, in every country.

How did you come up with the idea of an International Yoga Festival in Israel and what were your motivations?

Having personally experienced the effectiveness of Yoga as a healing practice, I want Yoga to be a part of everyone’s life. I always dreamt about the Yoga Festival in Israel and I dreamt that it will be international regarding teachers and participants alike. In 2016, I finally organized the first edition of the International Yoga Festival in Israel. The festival has successfully created a buzz and we receive teachers from all over the world – India, South America, USA and Europe. It has been a big success.

Having been practicing Yoga for 15 years now, I also see Yoga as means to blur the differences that exist within individuals – younger and stronger, the right methods, the dichotomy between emotional strength of the mind, and the physical strength of the body etc. Yoga with its focus on complete wellness has the potential to create sustainable bridges between various differences that exist – externally and well as internally. The Yoga Festival is dedicated to this cause. How is the three-day Yoga festival curated? What are some of its highlights?

The tagline of the festival is, 3 days of Yoga, music and inspiration. The Yoga festival basically about spreading Yoga as much as possible. During these three days, we try to curate a community of Yoga lovers who can experience different styles and different cultures in one space. The festival had grown and got recognition pretty fast, but we put a lot of effort in keeping it intimate. We want to ensure that each participant experience high-quality delivery and personalization. When an event gets too big, something important from the experience gets lost. Teachers are encouraged to stay with us in our retreat and design workshops, connect with musicians etc. One of the exciting things to see is teachers coming back to the festival as participants only, it's really a unique atmosphere. To add to this uniqueness, we also have Watsu therapy and water dance along with Yoga.

Music is an integral part of the festival and Yoga. We have musicians from Israel and around the world participating, bringing in different music styles to the festival. There is Indian music, spiritual chanting and kirtan and then there are some well-known artists who innovate and bring something new to the performances. Our favourite part is to connect different musicians and to make them create something together. It is always mind-blowing to see and hear musicians from different countries and cultures who have never met earlier, now play and create magic together. In your experience, how has Yoga shaped the perception of India in the eyes of the global community?

Yoga is like a gateway to experiencing the richness of Indian culture and many people are being exposed to India’s culinary side, philosophical traditions, literature and cultural values through Yoga. The Israelis, in particular, are very connected to Indian culture and philosophy and many of us refer to India as “Mama India''. We keep returning to India over and over again through the years.

I have been organizing the International Day of Yoga with the Embassy of India in Tel Aviv for many years now. The Embassy has a very open-minded approach where they really want to keep the tradition, the historical significance and the classical side of yoga intact on one hand and on the other, they want to present yoga in the modern way that can be people can connect with it.

The best part about Yoga is that it is not confined to any one community, language, identity or religious beliefs. The pluralism of Indian culture is reflected in the fact that India did not put boundaries around the practicing of yoga only to the contrary. In fact, it made a lot of effort to spread this wonderful art and science across the world, to make it very accessible, very open and embracing of all cultures and religions. Yoga is also a symbol and a model that we can adapt to many other elements for the world especially in times when there is an urgent need for peace and harmony to grow between individuals.

With the ongoing pandemic, how do you the future of Yoga? How has this impacted your plans of organizing the Yoga festival this year?

On the professional side, it has been terrible as all my projects, festivals seminars, retreats etc. that my team and I were working on for many months got canceled. So many people were supposed to come to Israel from around the world, but all of those plans could not be executed. But we are optimistic and we will set a new date when the reality will allow that.

The outbreak of Coronavirus in many ways has woken up humanity. We understand the importance of our health, our bodies, breathing etc more than ever. During Yom Kippur, everything comes to a halt in Israel. Many people meditate, pray and fast during that one day. Now it feels like every day there is quite in the world, something I have dreamt of earlier and really enjoying now.

The future of Yoga looks very bright to me. I feel it is at the heart of the growing wellness industry. Yoga includes all the aspects of wellness, it is a philosophy, a comprehensive nutrition system, and it is consciousness arising.  It can also be seen as a sport and at the same time take care of the mind. Culture is becoming very strong because as we said yoga is affecting all aspects in life. I think the next step is really to bring the concept of Consciousness that is integral to Yoga into the way we do business and in our interpersonal dealings as well. Yoga also shows the way of doing things much more consciously and mindfully, with a lot of respect for our fellow beings and of course to Mother Earth. 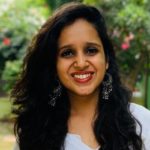 Arunima Gupta is Principal at Network of Indian Cultural Enterprises (NICE). She tweets@ArunimaGupta03