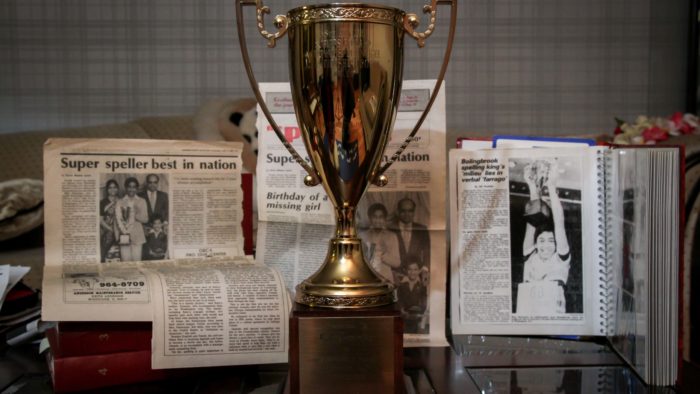 Balu Natarajan, M.D. in Internal and Sports Medicine completed a sports medicine fellowship in Minneapolis, MN where he focused specifically on work with high school and college area athletes. In addition, he serves on the Medical Team of the Chicago Marathon and has extensive experience with patients preparing for endurance events. He also serves as team physician for the Chicago Storm and travelled to Brazil with the US World Cup Beach Soccer Team. Born and raised in Chicago, Natarajan is a runner and recreational athlete himself. However, over the next few months, he will be busy helping his son train for a different kind of game. A game that requires hard work, performing in front of an audience, and quick reflexes and thinking. His son Atman will be among the thousands of children competing in the 93rd Scripps National Spelling Bee, the prelims of which are being held in the United States over February and March and the finals will be in May, 2020.

Atman perhaps has a slight edge over other children, as Natarajan became the first child of South Asian immigrants to win the Scripps National Spelling Bee at the age of 13, in 1983 by spelling the word ‘milieu’.

To win the competition Balu had been practicing words, learning Latin and Greek derivatives and won the $ 1,000 prize money in his third attempt. He defeated 167 other contestants and had to spell 'farrago' which the runner up Kate Lingley from Maine had missed.

Balu's parents had been in the United States for 15 years, when he won the prize. In an interview to an American newspaper at the time, his mother Janaki said that it was a family project and that the family members quizzed each other most of the time.

Balu was studying at Bolingbrook at that time and since no one had won the competition from Illinois since 1931, Balu's win got a lot of attention. Like any other sport, this competition too is gruelling. Shalini Shankar, a sociocultural and linguistic anthropologist who has conducted ethnographic research with South Asian American youth, says: “One of the most surprising things I found when interviewing these young spellers was how hard they are willing to work.”

In this interview with CSP Balu Natarajan reminiscences about his victory at the Scripps National Spelling Bee competition, the first by a child of South Asian immigrants. You were the first Indian American to win the Scripps National Spelling Bee competition. What motivated you to take part?

From the age of 5, the importance of English was stressed at home. My mother's uncle was a revered English professor, and this was passed on to me. Eventually, in 4th grade, my teacher conducted spelling bees nearly every week. I became very interested once exposed to that weekly event.

Your son is taking part this year. You set a trend...how is it different for him?

It's much bigger. There are 500+ participants in the national bee these days, and it was 137 in 1983 when I first participated. The computer and the internet have created a lot of change, too. The number of words one can learn is exponentially higher than what was possible 35 years ago, so the standard has risen dramatically.

What is the value of these competitions?

These competitions teach families to come together in preparation, teach children the value of hard work, teach competitors that losing and winning are both necessary parts of life, and remind all of us that having a standard of perfection is actually a good thing in at least some settings.

What accounts for the success of Indians in Spelling Bee competitions?

This has been chronicled in such texts as Beeline, by Shalini Shankar. The answer is complicated and intricate, but at minimum has to do with effort, grit, parental support and community support.

Do you think India's oral tradition of learning facilitates success in Spelling bee?

It certainly can help, but I do not know what percentage use oral learning vs. written learning with the assistance of a computer.

Indians and Non-Indians have prepared lots of study material. The knowledge base has risen collectively as a consequence.

You also are trying to introduce the Mahabharata and Ramayana to kids in new ways. Do we need to use new approaches to get children interested in the epics?

I have been using this approach - case studies applicable to today, just like business school, with the answers found in the Epics - for 30 years. If we don't explain how that timeless wisdom applies today, that wisdom will be lost upon millions of our children.

Indian immigrants enjoy a good reputation abroad. How are they carriers of Indian Soft power?

Indian descendant Vivek Murthy was U.S. Surgeon General under President Obama. And the list of CEOs below, all of Indian descent, is astounding. Need I say more?