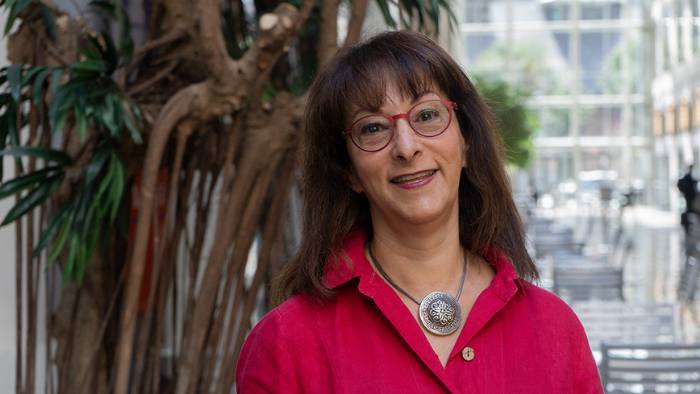 Maggie Holtzberg was first introduced to some spectacular Indian art forms and artists when she was an undergraduate student at Wesleyan University in ethnomusicology. And ever since then, she has met and worked with and helped try to support artists from various fields.

Most of her working life has been as a folklorist working within state art agencies. Every state in the United States has one funded by the National Endowment for the Arts, and nearly every State has a position of a folk arts coordinator. But in order to find traditional artists, it involves ethnographic field work to identify them because some of these traditions are sort of hidden from the mainstream, although that is changing now. Maggie Holtzberg joined the Mass Cultural Council, Boston, in 1999 as a folklorist.

“You must be a generalist because we are talking about music traditions, craft traditions, oral traditions, etc. So, we look to the community and the practitioners to understand what is excellence in those traditions, and how we can support it with grants and with presentations to the general public.

We basically are trying to support communities and artists across the state that are so diverse. I have been so impressed with the South Asian community here in Massachusetts; there is such a high level of musicianship. It blows my mind away,” Maggie expressed.

The following comments are taken from a conversation with Maggie Holtzberg about heritage, its impact, and the role of the community in its preservation. 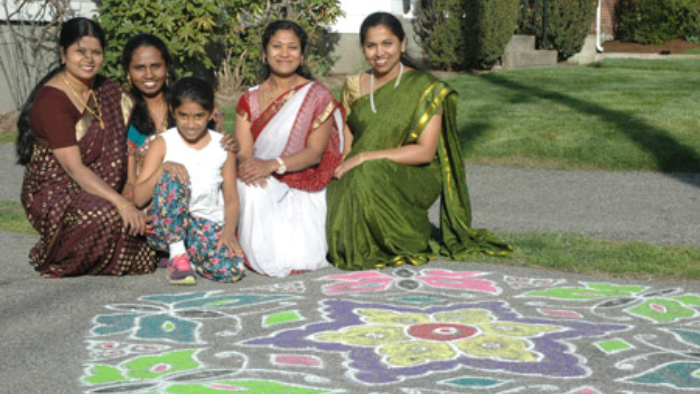 Preserving cultural heritage. Why is it important?

We talk of cultural heritage with so much pride and take steps to preserve it. But where does that lead one? I believe the best way to get those answers is to ask people within the communities themselves. The knowledge within one’s cultural heritage is ephemeral; it is within the body and its movements. And if one does not intentionally pass it to the generations to come, it will be eternally lost. And that to me is a real risk.

Preserving cultural heritage also has to do with identity. Who are we? It has to do with belonging and feeling a connection to a cultural community and to familiar tradition. It is important for holding humanity together.

In a world, where diaspora find themselves ridden with identity crisis, one’s culture can come to the rescue. This is one of the reasons why Indian parents outside India find ways to instil their culture in their children by enrolling them into dance classes, music classes and so on. They form their own little community and celebrate festivals with grandeur. These are part of the efforts made by the community themselves to retain that little bit of culture they left back at home.

One way of preserving cultural heritage is with the support of the Folk and Traditional Arts Program at  a state arts agency. We use state and federal funds to work towards sustaining the vitality of cultural traditions, deferring to the values of specific cultural communities,

Mass Cultural Council offers two-year apprenticeship grants where they fund a master artist in the traditional arts to work with a promising apprentice. These apprenticeships can make a difference between a tradition dying out or not. The grant can also raise visibility within that community. It brings awareness to the people outside of those artistic traditions and communities that there is this level of excellence in the community of which they may be unaware. We have also striven to influence concert presenters and museum curators to help diversify who is being represented in these high production value venues.

It is so interesting because I am working on this area. If you take into consideration monuments and heritage sites, one thinks of something that is made of stone. If you look at something that is made of a perishable material, for instance, the West African Sosso Bala, it is a musical instrument that dates back over eight hundred years.; Parts must be replaced over time. In fact, it is probable that almost all of its parts have been replaced, yet it is highly revered as a cultural object.  The Sosso Bala is valued not because its original materials have been preserved, but because it is the material embodiment of a living tradition maintained by performance.

Another example I want to share is a shipwright named Harold Burnham.  He comes from eleven generations of wooden boat builders in a little town that produced more wooden schooners vessels than anywhere in the world. Today, we have fibreglass boats that are built very differently from these old schooners. The schooners are not fishing under sale anymore, yet the knowledge of how to build them is passed on to keep that heritage alive. It connects the people in the region to that ship building legacy.

State-funded apprenticeships provide a path for the knowledge to be passed on. 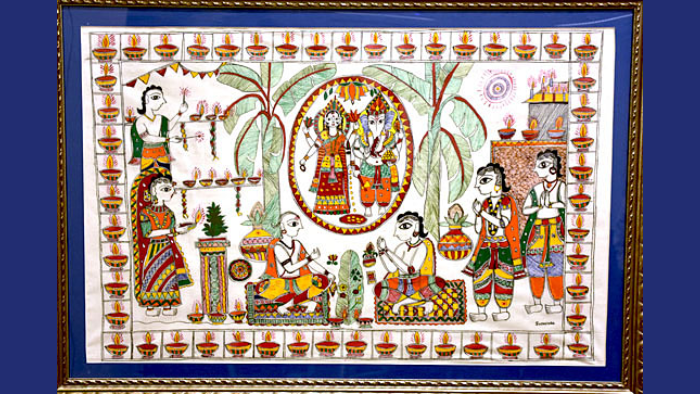 We need to try to reach out, not just to the tradition bearers that are carrying on intangible cultural heritage, but to try to connect somehow to others doing this similar kind of work, because together you will have much more strength and funding to accomplish what you want to do going forward – Maggie Holtzberg

I have gotten to know and work with Bharatanatyam dancers, Carnatic and Hindustani musicians, and practitioners of Kolam. We have also funded a woman working towards spreading the art of Madhubani. We have funded several apprenticeships with her to pass on that tradition.

Recently I interviewed Nina Gulati, who was the first to start an Indian dance school in Massachusetts many years ago. Many additional schools of Indian dance and music have proliferated. It is like having these little pockets of tradition that are carried on by descendants. Either they are people that are here through immigration, or they have been here a long time.

Well, I would not know enough to be honest. Massachusetts is a very large and diverse state. Also, since I have not been to India, it is hard to say. But I would think that there is sort of a bureaucracy of how those things get added to UNESCO’s ICH list.

In the United States, we award National Heritage Fellowships, which recognize those who have been exemplary in their work towards preservation of our heritage. Japan has its List of National Treasures where they award individuals involved in preserving important intangible cultural properties.

In India, the Ministry of Culture offers a scheme that supports individuals and organisations working towards the same by offering grants for research, publications, and promotion with reference to ICH.

With respect to UNESCO, there are endless things that could be added to the list. But I think there are other ways to bring more awareness. That is why I mentioned the National Endowment for the Arts National Heritage Fellowships

I have built up an archive documenting tradition, which is now accessible in a digital repository managed by the Massachusetts State Archives.  I believe it is important to have field-recorded documentation be housed in an institutional archive (university, state, or federal) that can properly accession and safeguard these materials, while making them digitally accessible in perpetuity.

I also think it is important to network with people that are doing similar work in cultural preservation. That could include people, cultural organisations, museums, universities, and graduate students working towards a degree in folklore, ethnomusicology, and related fields. This helps in documentation.

Academics study culture and heritage, their impact on society, and ways to preserve it and so on. Their work is documented in journals, but how many are translated into the real world? Even though I went to school and got a Ph.D. in folklore, I did not want to speak only to that niche audience. My preferred audience is   the general public through programming, films, and curated festivals.

We made a short film on Tabla maestro Sandeep Das and his young apprentice. Through that, I became aware of how different the system of transferring knowledge, mainly the tradition of Guru-Shishya Parampara, used to be in India. In this tradition, which exists mostly in the Vedic community, children at the age of five or six leave home to learn the Vedas under their Gurus. They live with them, serve them, and when the appropriate time comes, they leave their Gurus home. 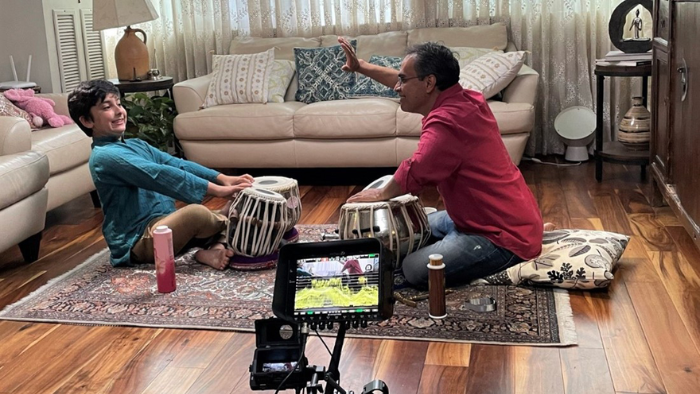 In Pic: Tabla Maestro Sandeep Das and his shishya during a short film MCC produced about an apprenticeship in tabla

Today, students continue to learn the art under a Guru, but do not stay at their residence. In learning about the prevalence of arangetrams, I noticed that young people reach this incredible stage in their dance or music practice and then many of them go on to be research scientists or computer programmers or doctors. The arangetram serves less of a beginning than a closure.

In all fairness, this happens fairly often in many artforms. People prefer to have them as a hobby rather than take it up as their main career, mainly because they have access to a stable job and steady income.

I think it is a very positive thing for all kinds of communities. The cultural exchange between the two countries. Artists like Tara Anand Bangalore bring artists from India to the States, and the US States Department has sent people back and forth. The more people are exposed to cultural heritage here, the better. Not only that, the expertise that they have over not just arts, but in other aspects too, for instance, mathematics. This can only help people in both countries to know each other better and have respect for each other.

From the very beginning, when I was introduced to Balasaraswati, T. Ranganathan. And T. Viswanathan at Wesleyan University, I have been amazed by the ancient traditions of Indian performing arts. They came to teach American students. Their dedication created a new awareness and appreciation for the beauty and complexity of these art forms. If you did not have that kind of cultural exchange, you would not know the country. You would not know the people and the culture they value. And what a loss that would be.