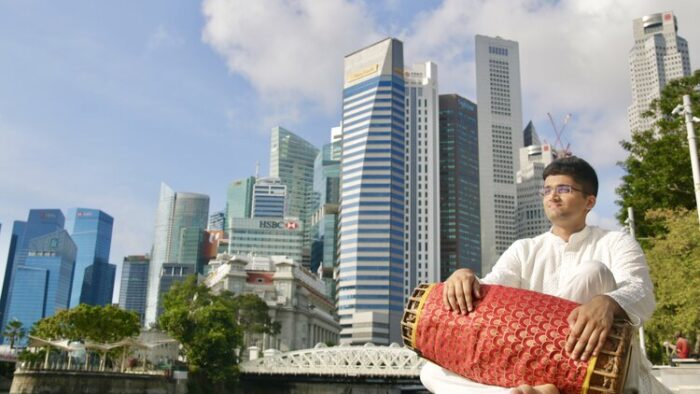 While studying for a masters in global thought, Abhinav Seetharaman, a keen linguist, decided to incubate an online venture teaching people Sanskrit. His venture Spoken Sanskrit was co-founded with a Chinese student who did a PhD in Sanskrit and Tamil literature.

A language so precise and grammatically perfect, Sanskrit holds the key to studying Indian civilization and the countless other cultures India has influenced. It is a soul-sustaining power with the capacity to illuminate, spiritualize, and educate. Despite many who label it as an antiquated tongue, Sanskrit has actually experienced a global revival since the turn of the century.

Moreover, Sanskrit’s growing popularity is not confined to just India. The United States, for example, has seen a rise in the number of Indian-Americans learning the language, many of whom are youth. This increase in demand has – in large part – stemmed from the emergence of several institutions that offer Sanskrit study as a major part of their curricula.

It is important to note, though, that Indian-American youth are drawn more closely towards learning spoken Sanskrit first, over literary Sanskrit. There remains a perception of Sanskrit introduction through religious texts and recitations as being mundane and largely unappealing. Hence, immersion in a high-quality Sanskrit environment and curriculum that easily resonates with these children have been of paramount importance to open up the language to them.

Samskrita Bharati USA is one such institution that seeks to address the above, as a non-profit dedicated to popularizing and promoting Sanskrit as a spoken language among children and adults alike. One of their flagship programs is Samskritam as a Foreign Language (SAFL), a three-year online distance education course designed to introduce high-school students to conversational Sanskrit through high-quality immersion. What was once a pilot with just a handful of students has now blossomed into accredited, multi-instructor-led classes of several hundred, making it a true success story that once again dispels the notion that Sanskrit is an esoteric and dying language as some claim it to be. The thought of learning how to speak one of the world’s oldest and culturally rich tongues and simultaneously being able to have courses qualify for academic credit is one that more Indian-American youth are attracted to.

Completing programs like SAFL provides youth in the US with an opportunity to appreciate one of the largest cultural backbones of India, despite being in another land. It allows them to connect – and in some cases, reconnect – to their cultural roots on a deeper level, and seek answers to questions on spirituality or religion that they may have. Learning Sanskrit can help broaden their global outlooks and provide varied perspectives on topics in philosophy, mathematics, creative arts, science, politics, and many more. Needless to say, those who wish to delve deeper into literary Sanskrit have the option of pursuing Sanskrit majors that are offered by an increasing number of American universities and centers of higher learning.

Other institutions across the US have also long offered Sanskrit classes for youth. From temples to spiritual organizations like Chinmaya Mission and Arsha Vidya Gurukulam, it is not uncommon to see Sanskrit camps and courses specifically tailored for children taking place. These multidimensional classroom and community experiences have resulted in a gradual increase in the number of Indian-American youth learning Sanskrit, as more parents also recognize and value the depth of resources that these centers provide. And in a country that prides itself on liberal educational systems, learning Sanskrit teaches these youth how to become individuals who know how to use their minds and think independently.

All this higher demand for Sanskrit learning has additionally spurred the creation of projects such as Samskrita Bhavanam: a planned center near Washington D.C. entirely devoted to Sanskrit education. Upon completion, it will become one of the first institutions of its kind outside of India, offering a gurukulam-style setting conducive to immersive and enjoyable language study. Fostering such nurturing environments is crucial to inculcating lasting levels of interest amongst children.

The heightened interest in Sanskrit learning amongst Indian-American youth is also symbolic of a larger trend that we are witnessing: the gradual revival of spoken Sanskrit. It is no secret that language is a medium through people are able to bring about a more nuanced understanding of communities, cultures, and nations. Sanskrit is an eternal cultural ambassador of India, and the fact that more people are embracing it shows that the culture that speaks the language is very much alive, and will hopefully continue to thrive for generations to come.

(Abhinav Seetharaman is a reputed Carnatic performer on the mridangam. He was introduced to the instrument at the age of six under the tutelage of Sri N. Ganesh Kumar, and proceeded to learn from Sri Vijay Ganesh and Sri Tiruvarur Vaidyanathan. He then commenced advanced training from Sri Kumar Kanthan of New Jersey, and legendary maestro Guru Karaikudi R. Mani. )