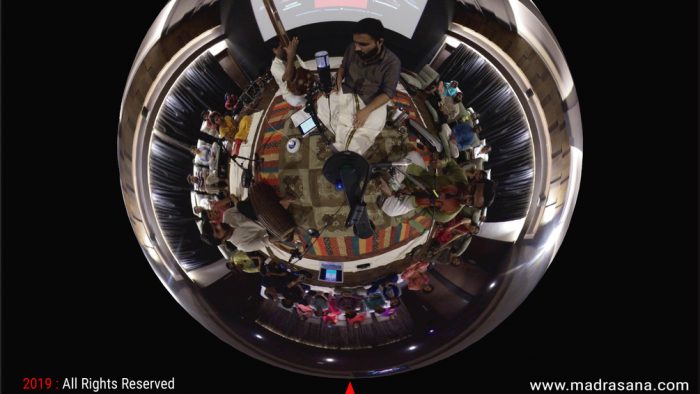 Started in 2016, Madrasana is an attempt to present classical art in an intimate setting to bring the artiste, the art form and the listeners closer to each other to have a better connect.

MadRasana recorded 6 artistes with live audience. Each album has three sets of 45 minute duration, comprising of slow medium and fast paced songs. The artistes have tried to have each of the songs as a multiple of 5 minutes so it will be easy for listeners to make playlists that are 30 minutes, one hour or longer to coincide with listening pleasure. "We also realize that you will be listening to these albums on your headphones while working out – so they have mixed the albums using Binaural technology , so you can get a spacial orientation of the artistes as well."

All the MadRasana Sessions were recorded with live audience in place and also using a new format of mixing called the binaural format. "Since we believe a lot of us are beginning to listen to these on our headphones - this format will be perfect as it gives a 3 D sound that places the sound source to give you a spatial orientation of the artistes as well. These concerts were recorded with the artistes in the center of the hall - all facing each other and he audience sitting around the artistes. The recording of these albums will also reflect the 3 D sound that gives the orientation in your head when you listen to them using headphones. These can be listened to on any other sound player," said a MadRasana spokesperson.

The first in the series is an album by Carnatic vocalist Vignesh Ishwar. Speaking to CSP, he said "I am extremely thrilled to release our MadRasana Sessions Album . This was the first in the series of live recordings keeping in mind that many of you listen to Carnatic music while working out. The content is still the same as any Carnatic concert but modified suit those who use it for workout."

Performing with Vignesh in this album are L Ramakrishnan on the violin and Sumesh Narayanan on the mridangam. Sri Balaji is on tambura. The album can be purchased on https://gumroad.com/l/MADSESVIG/madsesartvig

“MadRasana Unplugged” are professionally produced video and audio recordings specifically for the online digital media where they present just one song per artist with just the artiste and tambura or very minimal elements added so that the art form takes the center stage.