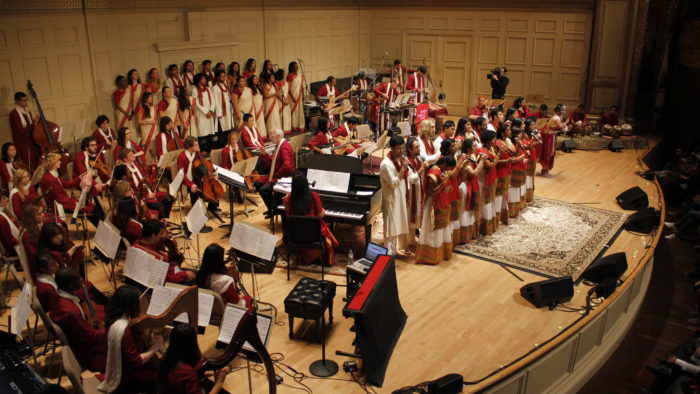 As part of our Art Education: Benefits and Influence series CSP is happy to feature an interview with Annette Philip, Founder/Director Berklee Indian Ensemble and Artistic Director Berklee India Exchange. Annette says that at Berklee, students who join the Berklee Indian Ensemble have an opportunity to be exposed to, and create within the myriad idioms of Indian music be it classical (both Hindustani and Carnatic), semi classical, ghazal, folk, contemporary or jazz-influenced Indian music.

What is your personal interest in music?

I cannot imagine my life without music. It feeds me. It gives me joy. It nurtures me. It calms and soothes. It inspires. It awakens me. Making music or being involved in ANY part of music daily is a blessing and a necessity. I understood early on that without it, I would wilt.
Moreover, making music and creating with others is a HUGE part of what I believe my purpose is on this planet - to connect, to spread joy, to realize our similarities and celebrate our beautiful differences - all this comes through the study, practice and full immersion of and in music. I love the use of technology as much as the raw sound of the voice. I love that I use a specific song to wake up every day, as opposed to the harsh sound of an alarm clock. I hear music everywhere. In the rhythm of someone typing on a laptop, to the birds outside my window, to the unusual harmonies and dissonance of traffic. Music isn't an interest. It's energy that feeds the life source within.

What is the greatest attraction for students at Berklee towards Indian music?

Indian music is an age old tradition, it is a way of life in the country, not simply a hobby or entertainment. Music is so intrinsically woven into the fabric of our culture, from our religions, festivals, food, films, stories, and of course various art forms. At Berklee, students who join the Berklee Indian Ensemble have an opportunity to be exposed to, and create within the myriad idioms of Indian music be it classical (both Hindustani and Carnatic), semi classical, ghazal, folk, contemporary or jazz-influenced Indian music.

Most students who seek out Indian music studies at the college are intrigued by our unique system of Ragas, the intensely complex yet wonderfully logical, mathematical genius of rhythmic compositions, and the synergistic improvisational DNA found both in Indian classical music and jazz. Many of our students employ Konnakol principles in their compositions, as it gives them a fresh perspective on phrasing, comping options and simply put, brain exercises that are fun, tasteful and deliciously challenging!

Besides this, the Berklee Indian Ensemble as a class has become a hub for students of many countries. From 2011, we've had musicians from 43 countries be part of the ensemble - and this confluence of global cultures informs the music created by the group. Over the years, the Berklee Indian Ensemble has developed a style of its own, through cross pollination of ideas from all over the world, a focus on lush vocal arrangements, and a penchant for reharmonization / reinterpretations and original ideas.

The sound that has emerged is distinctly Indian with a global flavour. It honours tradition while also embracing the future. It values structure, while being extremely open and experimental. Nineteen original songs have emerged from the ensemble, and we have been blessed to garner over 170 million views for our viral video content. Annette with A R Rahman

Moreover, the fact that the ensemble frequently hosts some of India's living legends from Pt. Zakir Hussain, to AR Rahman, is of great value to students, Indian or otherwise, to get once in a lifetime opportunities to create and collaborate and be mentored one-on-one by these icons. Most importantly, the Ensemble is a community, a family. We try to always look out for each other, and the students spend many hours bonding over food, movies, or other projects. Many a band (and many personal relationships) have emerged from students meeting each other in this Ensemble.

What are the changes that are happening in terms of the learning and performance of Indian music among youngsters?

This is a very broad question.

I think on one hand, there seems to be a resurgence of people interested in classical and folk music. The advent of shows like Coke Studio have brought some of these genres back into mainstream (although they were never absent).

On the other hand, with the internet, DAWs, and the home-studio becoming so popular, many more people are able to take on the role of composer/arranger/producer. There are so many people programming their own tracks, creating entire albums from their bedrooms. Plus collaborations exist globally now. Even during the Covid lockdown, there are hundreds of projects being created that involve musicians from all over the world creating together!

That said, classical music I believe, will primarily remain a guru-shishya tradition. The only big change is, now many teachers are starting to teach online classes, much to the delight of students who cannot live in the same city as their guru.

What are the courses offered in Indian music and the arts? Are students given a background to the origins?

Here's a list of current courses offered at Berklee that relate to Indian music, art and culture.

We are in the process of creating more courses as we speak!
In the future, we hope to offer a Minor in Indian studies. Are collaborations and new compositions a way to attract new audiences?

First off, collaborations are so vital for musicians, because every time you create with someone new (or even create with just one other person - even if you know them well), their influences start to merge and influence you. Humans are constantly evolving, whether we realize it or not, and even the way someone speaks, the food they eat, the ideas the carry forward, their way of thinking... all this informs their imagination and creativity. I believe collaboration and creating new works is a wonderful way for any creative person to continue to push their own boundaries, evolve, remain open, and challenge themselves.

In some instances, yes. This process also attracts new audiences. But more than attracting an audience, I think what's interesting is the opportunity to expose audiences to a variety of musical elements. Most times, when people say, the audience won't like something, they have no idea if the audience is even aware of this. Similar to food, some types of music are an acquired taste. Only once one is exposed to something, and expands their palate, can they truly know if they like or dislike it.

In terms of Berklee collaborations: each and every time we work with an artist we have a multi-step process we follow. We first study the entire discography of the artist, learn about all their different creative avatars, so to speak, and find interesting flavors that we feel connect well with the ensemble. Next, we break the songs down, and rebuild them, sometimes completely reinterpreting them much to the surprise of the artist. A completely new work is birthed. Similarly, when an original song is being created within the ensemble, it's such a beautiful unusual process of discovery. Often times, mistakes are beautiful detours that lead us to undiscovered possibilities!

Do you see Indian music being attractive to musicians of other Asian countries?

It absolutely is. I think not just Asian countries, but the world over, the intricacy of Indian melodies and rhythms intrigue people.

I feel I've answered most of this in your first question. To add, a lot of Electronic music includes Indian aalaaps - this is not a new element. Yoga, mysticism, Sanskrit chants, Indian food, Indian textiles, Indian patterns and designs... all this is extremely attractive to other countries. Ours is such a rich and varied culture, vibrant and flavourful in every sense of the word!

How is music taught at Berklee? How do you think the move from a traditional oral tradition to a classroom environment has changed the form?

At Berklee, we use all sorts of pedagogical methods. There are various classes that still rely primarily on the oral tradition. You will often see this in the Gospel Ensembles for instance! Within the Berklee Indian Ensemble, we use both oral and written formats to share information with our students. Singers from different countries are present, so we write lyrics in English transliterations and we talk through each phrase helping students fully understand and imbibe the pronunciation of words, while also talking about the history, back-story of each song, as well as the relevance in our lives today. With the non-vocalists, we often write down the basic chords of the song, but there's still a lot of listening and transcribing work involved. Most Indian nuances are impossible to write out in Western notation, and so we break down phrases, and musicians will imitate and find ways to write down/remember/internalize the specific nuances.

What role does Indian music play as a carrier of culture?

Indian music is a carrier of language, stories, retelling of historical lessons. There's religious music, reflective/meditative music, music used in festivals and traditions, as well as being an integral part of our film industry which has made India one of the most diverse, vibrant, and expansive cinema hubs in the world. Trends, new lingo/slang/colloquialisms, evolution of fashion / dance / personal style, modern traditions - all these are created and propagated through our music and especially in this era, the visuals connected with music. Women of the World

Could you please share some collaboration where you saw music bringing together cultures?

One of the projects closest to my heart is my vocal quartet, Women of the World. We are four women representing Japan, Italy, USA (via Haiti) and India. We sing in 37 of the world's languages (and counting). It is as much as a sisterhood as the internationally acclaimed award-winning quartet we've evolved to be since 2008. Women of the World believes that learning about myriad cultures in the world (through song) is one of the most powerful ways to gain more understanding about each other. From that understanding, may come acceptance and respect. And from that respect may someday come peace. Despite the differences in cultural tenets, when ones studies a folk song, more often than not, the core story is the same, no matter where you grew up. All over the world, people experience love, joy, heartache, birth, death, pain, sorrow, fear, doubt, uncertainty, hunger, excitement, passion, disappointment, failure, victory, surprise, awe, and wonder. It is these common stories that Women of the World seeks to share.

Could you share anecdotes of how you saw a non-Indians’ change after being exposed to Indian culture?

Well, in the Berklee Indian Ensemble, food is equally important as music. Many of our non-Indian students have been introduced to lots of Indian food - including many home-made dishes which our students bring during potluck celebrations. Besides this, we usually wear some traditional clothing during our performances, and lots of the non-Indian students love wearing saris. Some of the boys have even tried on dhotis and really carried them exceptionally well!