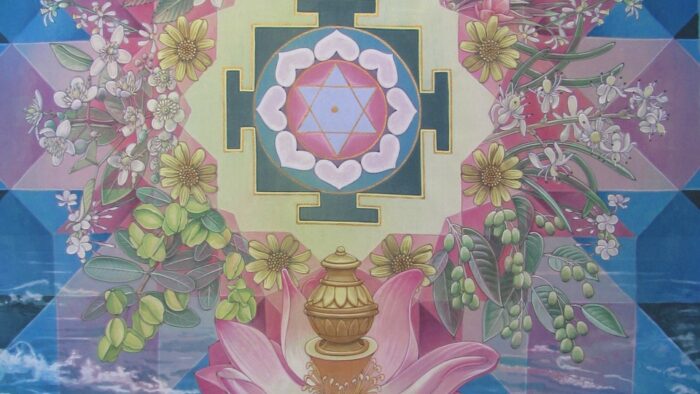 Among the medical systems of the world, Ayurveda is perhaps the only system that focuses attention on body, mind and spiritual health. The principles of svastha-vrtta, sad-vrtta and rtu-charya are unique to this ancient Indian science. Celebrating the unique role that Ayurveda is poised to play in a world where a tiny virus has shown up the inadequacy of modern health care, the Indic fraternity along with AVP Research Foundation/Vaidyagrama aims to launch a new chapter in disseminating the values and potency of Ayurveda.

Ayushman 2020 is being organized by the Center for Soft Power in partnership with the various other initiatives of Indic Academy and AVP Research Foundation/Vaidyagrama. The one-month festivities will include discussions on the history of Ayurveda, its global presence and contemporary relevance, Ayurveda in practice and as an academic discipline.

Starting on November 13, Ayurveda Day, Ayushmaan 2020 will celebrate the different facets of Ayurveda. Dhanvantri Jayanti, the birth day of Lord Dhanvantari, falls on Dhanteras, before Diwali, a time to celebrate external as well as internal prosperity. The two major lines of the development of Ayurveda are the one headed by Charaka and the other by Susruta, with the latter’s school being called Dhanvantara after his teacher.

The event will be conducted on weekends starting with the session “Parivartana - The Winds of Change” (register here: https://indicacademy.zoom.us/webinar/register/WN_DOJgAMTcRnKM3sr2JNlZ1A) on Friday, November 13th. The session will be chaired by Dr Ramkumar, founder and current head of Vaidyagrama, and a traditional Vaidya whose family has been steeped in the authentic legacy of Ayurveda for several generations. Dr Valdis Pirags, Dean of Medical Faculty in University of Latvia, will be participating in this session which will look at the Ayurveda scene around the world. The third session titled Prasarana: Global Footprints, will also be conducted under the aegis of the Center for Soft Power. According to some Puranas (Brahmavaivarta and Vishnu), writes Vedic scholar Prof Ramachandra Rao, Dhanvantari learnt Ayurveda from Surya, while according to others (Skanda, Garuda, and Markandeya) the Ashvini gods were his preceptors. In the Susruta Samhita, he is mentioned as a great sage (maharishi). The Mahabharata mentions a ‘Krishna Atreya’ as founder of the curative system. The Charaka Samhita too refers to him.

Learn more at the second day’s session on Itahasa - the Saga of Ayurveda which is being jointly curated by Indic Today’s Dr Yogini Deshpande along with AVP Research. Speakers will look at references to health in Indian literature and history. The session will include Dr PP Kirathamoorthy, Dr. M.V. Natesan (Professor, Sree Sankaracharya University of Sanskrit, Kalady) and Vaidya Vasudevan, and astrologer R S N Sharma. "We intend to cover the relationship between other shastras and Ayurveda to understand and apply the principles of Ayurveda. It includes the application of the six Vedangas. We will also refer to the other branches of Ayurveda including veterinary science, dentistry, surgery, Ayurveda for plants, etc," says Dr Yogini.

The fourth session, on November 28, very relevant to our times, will be Vartaman - Ayurveda Today and will look at public perceptions, Ayurveda and the Global Health Crisis and Emerging Policies and Regulations and their Impact on Ayurveda. "Ayurveda as a system of medicare did not develop in an adhoc way out of laboratory findings, occasional drug discoveries,  and sporadic technological improvements," says one scholar. Instead it had a coherent and comprehensive philosophy, and every procedure and thought complex  is at once wholesome and humane.

Indic Academy’s Center for Indigenous Sustainability members Rahul Goswami and Viva Kirmani along with AVP members will be in conversation with Mala Kapadia and others whose focus is Indic Wisdom for better humanity.

On November 29th, the sessions Jaivika - Food for Life and Traditional Cuisines will look at the role of Food, Crops and Biodiversity in maintaining and sustaining health. With an increase in fortified and modified crops, India stands at the brink of going the way of West, leaving behind her strengths in crop diversity through traditional practices.

For Charaka, Ayurveda was the ‘science of life’, that which instructs us about life and he explains this scientifically. Susruta on the other hand says that Ayurveda is that by which life is obtained or examined. Life in both cases, write Prof Rao, stands for health, the theoretical appreciation of the effective balance (samyagyoga) of the sense functions (kala), sense objects (artha), and the three fold behaviour (karma) which makes for health or diseaselessness (arogya).

It is only Ayurveda which recognised reasoning (as a separate and important instrument of Knowledge (pramana). This marked a departure from earlier practices which were sometimes esoteric and magical. Observation (Pratyaksha), examination (pariksha), inference based on reason (anumana), discussion with colleagues (Sambhashana), formulation of hypothesis (pratijna), diagnosis (nidana) were core methods of Ayurveda, making it the most modern of ancient sciences.

On December 5, Inter-Gurukula University Center’s Dr Nagaraj Paturi in the session Paravidya: Ayurveda Education Ahead, will explore the status of Ayurveda education today, as traditional gurukulas and modern education exist parallely in a society that is constantly changing.

Indic Book Club’s Abhinav Aggarwal will team up with Dr Nimin Sreedhar (https://www.softpowermag.com/dravya-is-a-kosha-in-digital-form-modernizing-access-to-ayurveda/) who has created a unique Ayurveda app, to conduct quizzes and literary activities in the session - Prabhava: Resources and Sources on December 6th.

Indic Yoga’s Vinayachandra BK in the session - Swasthya: Inner Balance on December 12, will focus on the common threads between India’s two great traditions. “Swasthya in Sanskrit means being established in oneself and that is the definition of health both Ayurveda and Yoga share among many other things. Both the systems in their unique and complimentary way suggest means and practices to maintain Swasthya by finding inner balance,” says Shri Vinaychandra. He adds that this session by leading experts from Ayurveda will explore these shared aspects focusing on Rutucharya (Seasonal Observances), Shodhana (Detoxification) and related practices.

From the very beginning it is recognised that health is disturbed both by the physical reasons as well as by mental imbalances.  Ayurveda is emphatic about the use of human reasoning (yukti-vyapasraya) through aushada (medicine), diet (ahara) and habits (vihara) to cure ailments.

Correct living, according to Charaka is wholesome, integrated living and is in sync with the Purusharathas - Dharma, Artha, Kama and Moksha. Ethics in Ayurveda tries to balance with pragmatic considerations. Sadhana: Ayurveda in the 4th Dimension on December 13 will be conducted by Advaita Academy’s Nithin Sridhar along with AVP members.

Taking Ayurveda to the future is IGen Plus’ Sowmya Aggarwal through Sthira: Ayurveda for Gen Z, on December 19 and will include many exciting programmes including films, quizzes, tips on choosing natural daily care body products and pursuing a career in Ayurveda.

The festival will conclude on December 20 with the launch of a film on Ayurveda by Bharatanatyam dancer Smt Rukmini Vijayakumar along with a session- Anubhava: Soliloquys by those whose lives have been touched by Ayurveda.

The festival will also include an online virtual exhibition of Ayurvedic plants unique to India.