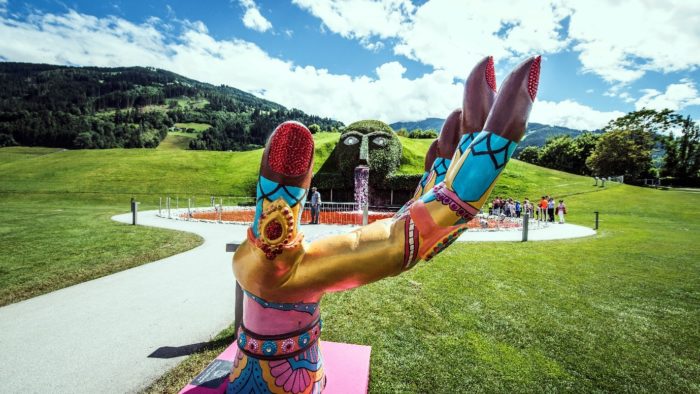 India has a rich history of crafting jewellery both for the numerous deities as well as for the public. Jewellery was both for the rich as well as the commoner. The myriad designs and motifs, materials used have fascinated us for millennia.

Given this it is not surprising that India is a popular feature at Swarovski Crystal Worlds and India is the third biggest market after Germany and Austria. Given the fact that Indians love Gold and Diamonds in their purest form, their fascination with crystal seems a bit surprising.

But then, Swarovski pieces sparkle and delight.

Not content with being a jewellery store they came up with Kristallwelten in 1995 to celebrate 100 years of D Swarovski K G. Multimedia artist Andre Heller was commissioned to design the museum with fourteen chambers of wonder . It was to make the whole experience of buying Swarovski crystals, magical. Heller’s thematic centerpiece for Swarovski Crystal Worlds is in the shape of the Giant. A Giant who set out to experience the world and its treasures, settles in Wattens and watches over his Chambers of Wonder ever since.

One guesses that the giant fell in love with the fabulous pieces designed by celebrity Indian designer Manish Arora which celebrate Indian crafts and designs.

Manish Arora is one of the world’s most sought-after Indian designers, who has worked with Swarovski on several projects in recent years. His creations are sold in the world’s most famous luxury stores, including Galeries Lafayette and Joyce. He has also designed two successful collections as creative director of the French fashion house Paco Rabanne.

His colorful, optimistic designs, which incorporate modern interpretations of elements from Indian folklore, delight fashion magazines such as Vogue, Elle, and Harpers, as well as famous Hollywood stars such as Rihanna, Lady Gaga, and Katy Perry, and international brands like Walt Disney, Swatch, and Nespresso.

For the Giant, he was asked to design a chamber called “Ready To love - a chamber where visitors move into the amorous paradise wherein the heart rules and conquers all.” The hearts in the room are handcrafted in different traditional Indian techniques. Walking into the chamber it feels one is inhabiting a world painted by the miniature artists of the yore.

Swarovski has walked the full mile to create an ambience of a little bejewelled India. Eight years ago they even created a special Indian menu with aloo gobi, daal and more. Memories of the delicious samosa at Kristallwelten inspired me to reach out to them. Here are excerpts from the interview.

How is India viewed by the Kristwallten?

India is the 3rd biggest market after Germany and Austria. Over the last few   years India has become and will continue to be one of the most important countries of origin for Swarovski Crystal Worlds. Since it opened in 1995, Swarovski Crystal Worlds has welcomed over 1 million visitors from India, who thus make up a significant part of the tourist attraction’s 15 million visitors to date.

A wonderful co incidence was the 15th million visitor was a couple from Bangalore, India! Darshana Raykarand Achyut Hegde could hardly believe it when they were welcomed in the entrance area of Swarovski Crystal Worlds’

How do you showcase India?

In the year 2015, we opened our new restaurant which offers international dishes (we of course added Indian dishes to our menu as well). We also installed a mobile tea-booth for our Indian guests, which is very popular. We serve a wide range of teas at our tea booths.

Over the last couple of years, we have been working together with Indian designer Manish Arora on several occasion. He designed the Chamber of Wonder “Ready to Love” .For Indians the trip is pretty much worthwhile even just for Swarovski products. But then they also find a corner of India at Swarovski Crystal Worlds, when they visit the Chamber of Wonder “Ready to Love,”

In our chamber of Wonder 'Famos' the Taj Mahal is a crowd puller. Has anything been done with India in mind that appeals to global travellers?

In 2017 our annual Summer Festival was dedicated to India, also in cooperation with Manish Arora. From July 1 to August 31 Swarovski Crystal Worlds were transformed into a “Mela” – a gorgeously colourful Indian fair, which appealed to the taste buds as much as to the eyes, ears, and nose. An ocean of colors and shapes formed the dazzling setting for music, installations, exciting performances by Indian artists, and interactive elements for young and old, along with exotic delicacies. Surrounded by the colourful culture of this Asian country, a day in the Giant felt like a holiday in India.

Are Indian preferences important to you?

We are in touch and constant exchange with key players in India. India is one of the most promising markets for the Austrian tourist industry. We know that Indian are big spenders when it comes to destination weddings, honeymoons, it is a popular location or film shoots and for organising conferences, it is a favourite destination for luxury travellers. In 2019 over 100,000 visitors from India booked overnight accommodation!

We hosted a major customer event for the Indian travel industry on our 25th anniversary. An amazing event was planned on the yacht Neverland for a glittering evening at the Gateway of India in Mumbai on February 3rd, 2020.

Hemalatha is a writer on culture and heritage and has been an educationist. She is an avid traveller and has written blogs sharing her tales.