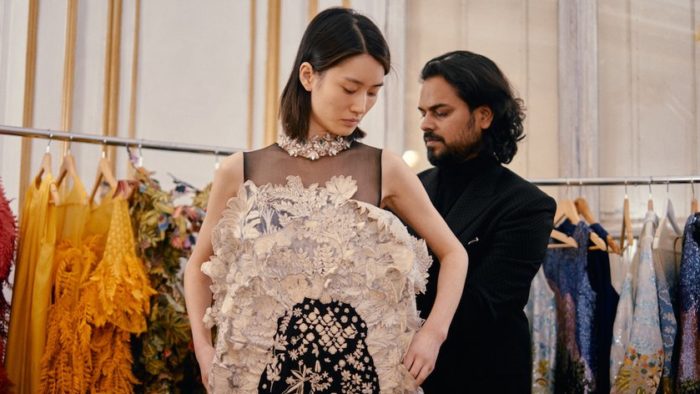 Mishra was in hallowed company with couture designers such as Valentino, Iris van Herpen, Zuhair Murad, Balmain, Chanel, Dior, Maison Margiela and Schiaparelli. Even while straddling the world of high design, Rahul has his feet firmly planted in India’s great sustainable traditions. His Haute Couture Spring/Summer 2020 collection included appliqué and embroidery feather effects and ‘lighter than air florals’ made by over 200 Indian hands.

Each of his couture pieces takes almost 3,000 to 4,000 hours to handcraft, creating meaningful employment for artisans and embroiders. “The slowness enables us to incorporate a natural human pace to the process of creation, the biggest luxury of the moment,” he recently remarked. A graduate of the National Institute of Design, his dissertation addressed various social issues, and his encounters with numerous skilled artisans and craftsmen left them gratified and empowered. His debut collection on Kerala handlooms, took him to Istituto Marangoni on a scholarship.

Rahul has let “craft lead the way” to Paris and further. Right from the beginning, his inspiration evolved from the belief that “a tradition that has been practiced for generations and has upheld economies, can be moulded into a chic, modern, urban wear line.”
Winning the prestigious and coveted International Woolmark Prize and his international debut at Paris Fashion Week for his Spring Summer 2015 collection were a thumping endorsement of the choices he made towards creating a niche ethical fashion statement. Presently he retails at the best fashion stores, and online portals around the world, as well as a select few boutiques across India.

In this exclusive interview with the Center for Soft Power, Rahul comes across as a fitting ambassador for a tradition that has always cared deeply for the hands that create as well as the environment in which such art flourishes. On making it to the Paris Haute Couture Calendar, is that something you aspired to. What does it mean to you?

I definitely had wished to showcase at the Paris Haute Couture Week as it is the most prestigious platform for fashion in the world and I have looked up at the legendary designers that are and have been associated with it.

Showcasing couture also assists our brand in creating processes that further our core philosophy of sustainability by creating employment and inclusivity. The idea of custom making each piece of clothing as per the demand from a client is something that works very well with our intention towards slow fashion where we have begun to make less number of pieces but growing larger in terms of production time hence, employing more people and for longer. What percent of your fashion quotient was shaped at the National Institute of Design and how much by foreign influences?

I had taken a course in Apparel Design at NID because that is the criteria I was able to fit into being from the science background. During the time, I did showcase a collection at the Lakme GenNext platform which was also my second year classroom project but fashion as a concept was introduced to me when I went to Milan to study at Istituto Marangoni. I am certain that I had an ilk for fashion ingrained in me from the beginning but I got a chance to properly explore it when I went abroad and studied it.

How important is a platform like Lakme fashion week for upcoming designers?

Having started my journey with Lakme Fashion Week, I have a soft spot for the platform. It is a great space for young designers to be noticed at considering the influx of attention that it brings to the label. Platforms such as this also create a healthy competitive space for young brands to learn from each other and grow through their initial years. What is the most attractive feature of Indian textiles/weaves for you? Why this penchant for combining apparently disparate fabrics; Kerala cotton with Banarsi, Chanderi with wool?

Indian textiles are hand work; it takes many human hands to dedicate their time in order for the textile to realize. Throughout the process of its creation, the textile goes through many processes such as spinning, weaving, bleaching, dyeing, etc. that are done manually by the craftsmen which in turn, create opportunity for human error to occur; that according to me, is the beauty of Indian textiles. No piece is the same as any other and the emotional value attached with the fabric is unparalleled.

My penchant for combining apparently disparate fabrics (such as Chanderi with wool) comes from both, my love for the Indian craft and my hunger to experiment. I find myself with a constant need to see beyond what already exists and present what is intimate to me and beneficial to my community of craftsmen.

What are your thoughts on 'sustainable fashion’? How do you support it with your work?

Sustainability to me, is an ongoing process - it’s an ever-evolving idea. When we talk about sustainable fashion, we’re talking about mindful fashion that uses manufacturing processes which are sensitive of their effects on the environment and products that can be utilized in a manner that the natural resources that went into their creation are respected.

Ours is an ethically sustainable brand that works towards employment of craftsmen of India. Our constant aim is to create slow fashion that employs more people by the day while reducing the number of finished products being produced proportionally. We feel that it’s our responsibility to create the inclusivity that we are able to with the promotion of age-old hand craft and techniques that are slowly passing from the horizon - for the new world.

How do we save the ancient tradition of weaving and spinning? Is the weaver coming to the party?

The only way to sustain the existing and vanishing crafts of the country is by innovating them and adjusting them for today’s time. One has to look at the demands of the current market and learn to cater to them. A product that has to sell today has to be made with the ideas of today and the story from yesterday can add value to it. To further facilitate this, we must educate and empower our weaver and inform them of new technology and market analysis. A formal education is not only succulent for their growth, it would also become a prominent motivation for the future generation to rise and carry it further.

You have used Indian textiles to great acclaim. What would you say is the greatest appeal of Indian fabrics to the world?

I believe that the authenticity and human value that comes along with the Indian textiles would be of the greatest appeal; of course, along with the unparalleled quality and beauty of the techniques that our master craftsmen practice. Indian textiles have been known in the world for their finesse and uniqueness which remains incredible through time.

What are your most popular used motifs of Indian origin? How did you conceive the Lotus Effect?

I believe that the lotus tends to resurface in our body of work quite often. It was a prominent part of my ‘The Woolmark Prize’ winning collection and has been part of our story throughout the brand’s journey.
‘The Lotus Effect’ was the aforementioned collection which saw a lot of innovation from our end. As per the competition’s guidelines, I was supposed to use 70% of wool fiber in the collection; the intention was to take the fiber beyond its existing properties and make something new with it. For the collection we made a new fabric with inserting merino wool weft to the traditional Chanderi fabric on handloom. This gave wool the lightness and sheen of silk. Where does India stand today in the world of high fashion? What are the areas where we are stand out?

India has always had its space in the world of high fashion. Indian embroidery is known in the world and several European brands such as Alexander McQueen, Valentino, etc. are known to make their embroideries in the subcontinent. India has the skill that it takes to stand along with the high fashion brands of the world, just not many Indian representatives. However. The few Indian labels that showcase across various fashion capitals in the world such as Manish Arora, Bhibhu Mohapatra, Ashish or ourselves, are all recognizable for our individual voices and styles, which is a notable achievement.